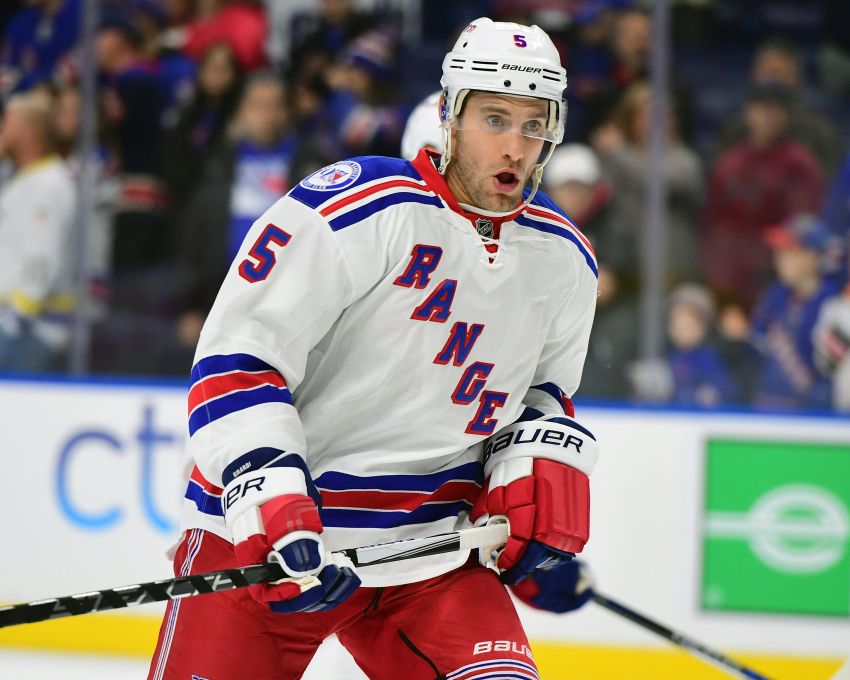 BUFFALO – Dan Girardi retired less than two years ago, so the ex-NHL defenseman was a contemporary to many of the Sabres.

If they knew Girardi as a player – despite going undrafted, he enjoyed a stellar 13-year career – they can likely relate to him as an assistant coach.

When the hapless Sabres fired coach Ralph Krueger on Wednesday, they also let go assistant coach Steve Smith. General manager Kevyn Adams wanted a fresh voice for his defensemen, so he moved Girardi, who was in his first season as a development coach, behind the bench.

Following a short quarantine, Girardi, 36, joined the Sabres on Friday and has helped conduct their last two practices.

“I’m talking to guys like I’m just out there with them in practice (as a player), just talking about random things, chirp here and there, just get a good feeling between all of us and get a better feeling back in the building,” Girardi said on Zoom call following Sunday’s practice inside KeyBank Center.

“Going back to MSG, (I) never would have guessed in a million years that the first time I go back there is coaching another team and the first game I’m coaching as well,” Girardi said. “It’s definitely … going to be a pretty surreal atmosphere.”

Girardi established himself as one of the Rangers’ linchpins over his 11 years on Broadway, helping them win 11 playoff series and reach the Stanley Cup final in 2014.

The native of nearby Welland, Ontario, began his pro career in the ECHL, a level below the AHL. But by his second season, 2006-07, he was a regular on a Rangers team that nearly upset the Sabres in the Eastern Conference semifinal.

“I’ve kind of been through everything,” Girardi said.

After the Rangers exercised a buyout on his contract in 2017, Girardi joined the Tampa Bay Lighting for two seasons. He retired in September 2019.

Interim coach Don Granato, whose Sabres have a 13-game losing streak, said Girardi’s recent playing experience is “a tremendous help to all of us.” He can amplify Granato’s message to his team.

“When I’m pushing and demanding, it’s fresh in his mind what it was like after 25 games and after two games in two nights and what the body feels like, what the mind may feel like with respect to any demand we may put on them,” Granato said. “He’s a great resource for our entire staff, as well as the players themselves.

“I will absolutely be leaning on him in that regard. … He is a great addition to our staff.”

“We have eight solid defense, which not a lot of teams have that, the ability to maybe change a guy in or out if things aren’t going great,” he said.

Girardi’s biggest task will be helping defenseman Rasmus Dahlin, 20, break out of his nine-week funk. Dahlin, the first overall pick in 2018, has regressed in his third NHL season, compiling a league-worst minus-28 rating through 29 games.

Granato said he wants his defense to be “active amongst the group of five.” Dahlin, of course, is at his best when he’s moving.

As a teenager, the Swede would often control games, grabbing the puck and dazzling all over the ice with it. These days, he rarely seems to have the puck on his stick.

“He’s a really great kid,” Girardi said. “He’s willing, first day we had him, he’s like, ‘Hey, anything you got for me, let me know.’ He’s willing to listen, willing to learn and wants to be taught, which is a great trait to have as a young guy in the league.

“Obviously, it hadn’t been the greatest year for him, it’s no secret. But he’s willing to try anything he can, learn different things and who knows what’s going to happen tomorrow for anyone?”

Granato and his staff clearly want to settle the Sabres down, get everyone on the same page and grow out of that.

“We’re really focusing on coming tomorrow night and the week moving forward here is getting the team concept, the team game in order – all five guys on the ice working together knowing what the other guy’s going to be doing, be predictable,” Girardi said.