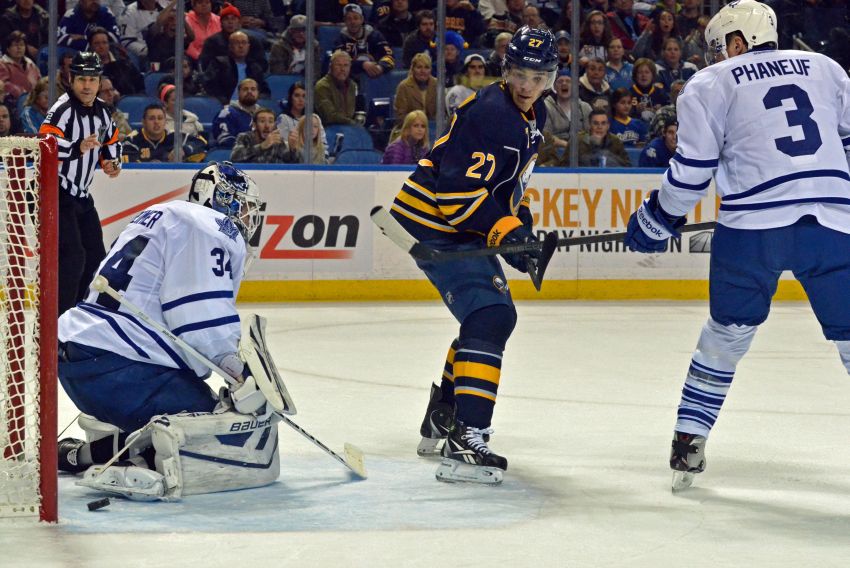 Leafs fans, who normally comprise at least half the raucous crowd when Toronto visits the First Niagara Center, outnumbered Sabres fans perhaps three to one in the capacity crowd of 19,070.

They ruled the building, chanting loudly all night.

So when the Sabres skated to center ice and raised their sticks after Christian Ehrhoff’s winner 38 seconds into overtime, some of the Leafs’ faithful saluted the players.

“Look what happened after the game was over,” winger Drew Stafford said following the Sabres’ first win in six games. “After a home win you get beer cans thrown at you. We’ll take it. Everyone’s happy in here. We got to remember how this feels.”

Incredibly, the Leafs have won 10 of the 47 games they’ve played here since the building opened in 1996-97.

“It is always really fun games to play in,” Ehrhoff said. “The fans that come down sometimes outnumber the Sabres fans. Still, it brings out the best in our fans, too, and they are up for the challenge, too.”

The Sabres, who hadn’t won since beating the Leafs 3-1 here Nov. 15, interim coach Ted Nolan’s debut, had been building toward just their sixth triumph all season.

Despite the string of losses, the Sabres have performed noticeably better in many facets of the game under Nolan.

“It’s one of those things where we’re trying, we’re trying. We’re competing,” Stafford said. “The effort’s there. We just haven’t been able to have a full 60-minute effort. I thought tonight we had a pretty solid night and also scored some goals. You’re not going to win a lot of games 1-0.”

Ehrhoff’s goal – his second this season and first past a goalie – came seconds after Paul Ranger’s holding penalty expired.

Instead of blasting a shot, Ehrhoff simply wristed the puck through traffic from the point.

“I knew their guy was coming out of the box,” the defenseman said. “I had a little room between (Carl) Gunnarsson’s leg, and he was in the shooting lane. I just tried to get it through there. I don’t think (James) Reimer saw it.”

Winger Matt D’Agostini, a waiver acquisition who made his Sabres debut Friday, was in front screening the goalie.

“The guy was coming out of the box behind Hoffer there,” D’Agostini said. “So I just figured he’d try to get it on net. He did a good job just getting it through.”

D’Agostini made perhaps the play of the game in the waning seconds of regulation, stymying James van Riemsdyk’s short-handed breakaway by racing back, diving and hitting the puck before he hit van Riemsdyk, who fell down.

Leafs fans howled for a penalty.

“I just tried to get as much puck as I can,” D’Agostini said. “I think he tried to step through me through my stick there. I think it was a good no-call.”

Nolan added: “Not only did he make a great defensive play, he was a net-front presence on the goal.”

“I haven’t played that much in a long time,” D’Agostini said.

Early on, it looked like it could be a long night for the Sabres.

Phil Kessel opened the scoring 2:12 into the contest, beating Ryan Miller on a two-on-one break.

But Matt Moulson’s power-play goal from the slot – he’s scored in the last two contests after an 11-game drought – tied it 7:57 into the second period.

Nikolai Kulemin put the Leafs up 2-1 at 10:23. The Russian has two goals in 14 games this season, both against the Sabres.

“I thought probably the first 10 minutes of the game they came really hard and they had more of the game,” Ehrhoff said. “But then we really picked it up. Second and third period I thought we played really well. We stayed out of the box, which killed us in some of the previous games.”

Then Luke Adam converted Zemgus Girgensons’ rebound from the right circle at 18:50, his first goal in four games this season and just his second in his last 28 NHL contests dating back to 2011-12.