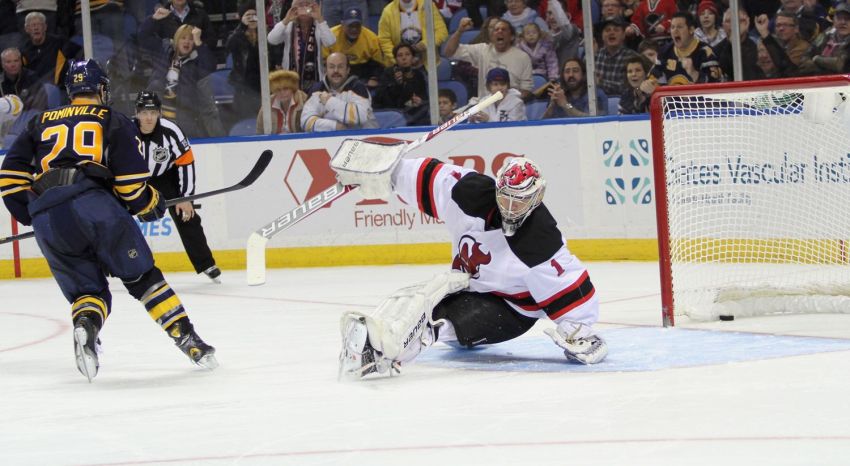 BUFFALO – Suddenly, the Sabres’ worst season in recent memory looks much more promising. Don’t order those playoff tickets yet. But the team, given up for dead just a week ago, has quickly cobbled together three straight wins under interim coach Ron Rolston, responding to adversity in each one.

In their latest victory, a 4-3 shootout triumph on Saturday before a noisy capacity crowd of 19,070 fans inside the First Niagara Center, the Sabres never flinched.

Both teams battled back from one-goal deficits throughout before goals from Jason Pominville and Tyler Ennis made quick work of the Devils in the two-round shootout.

“We’re getting more resilient as a team now, and I think that’s a good sign for us,” Rolston said.

Rolston, who started 0-2 after taking over for Lindy Ruff on Feb. 20, knows the Sabres would’ve likely lost a tight game like Saturday’s not long ago.

“When I first got here, if we would’ve gave up the third goal, it might’ve been a different result,” Rolston said about Andrei Loktionov’s tying goal at 11:22 of the third period. “We’re finding ways to win games instead of finding ways to lose games.”

Confidence has rapidly built during their first three-game winning streak. The dressing room possesses a different feel now. The Sabres have performed like the sturdy, veteran team many thought they would be this year.

“We’re not getting down when the other team scores,” Ennis said. “That might be the biggest thing. When something bad happens, we’re staying positive and working hard and doing the little things we know are going to pay off.”

Could the Sabres, who play tonight in New York against the Rangers, be positioning themselves for a third consecutive second-half run?

“We’re improving every game, cleaning a lot of stuff up,” Ennis said. “We still have areas we can improve.”

With leading scorer Thomas Vanek (upper body) sidelined, Pominville stepped up, scoring twice in regulation, his first points in five games and just his second contest with a point in 12. He was also on the ice for all three Devils goals.

Pominville scored short-handed 7:17 into the second period, connecting on Cody Hodgson’s pass in the right circle after the center won a battle behind the net.

But Pominville responded at 3:10, connecting on another Hodgson pass from the right circle for his ninth goal and 17th point.

Pominville called his offensive funk “one of those weird slumps.”

“I think my play hasn’t dropped or changed at all,” said Pominville, who scored the shootout winner in Thursday’s 4-3 victory in Florida. “I really had a tough time getting on the board, whether it was assists or goals. (I) made plays that we didn’t score on, started plays that you don’t get on the scoring sheet (and) had opportunities that I didn’t put away.”

“Yeah, it’s been a while,” Hecht acknowledged. “I had a lot of chances so far this season. It’s nice to get the first one out of the way.”

The likable veteran, who’s known for throwing the puck on net from all sorts of crazy angles, zoomed in down the right wing and put the puck on goal. He then grabbed a pass from rookie Mikhail Grigorenko behind the net and backhanded a shot past Devils goalie Johan Hedberg parallel with the goal line.

“When I gave it to him,” Grigorenko explained, “I saw that the goalie was still at the far post. He was on his knees. I knew that Jochen had some time. For sure, it was really hard because he was on his backhand.”

Hecht added: “You drive to the net, good things happen.”

“There are certainly signs there,” Rolston said about Grigorenko’s progress. “It’s just the consistency I think now. Today’s game was better than last game, and the one before that was good.”

That sounds like Rolston’s talking about the Sabres as a team.