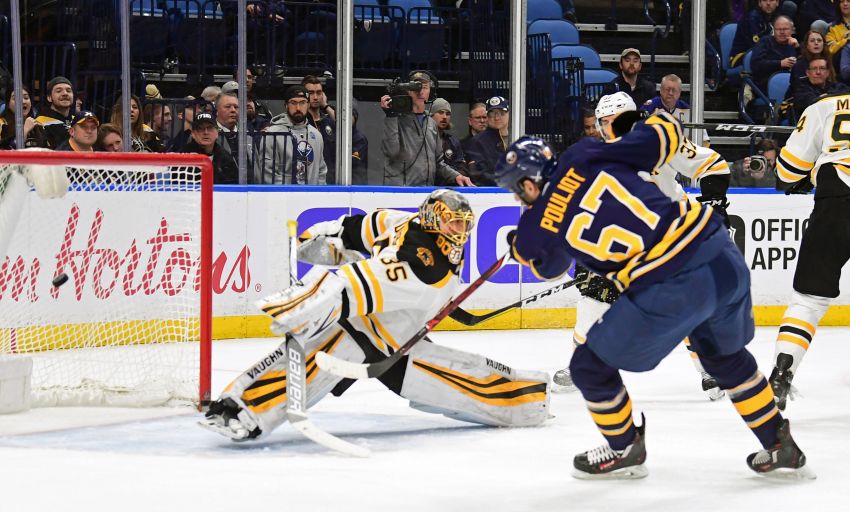 BUFFALO – Kyle Okposo is a self-proclaimed “hockey nerd,” so the Sabres winger plans to follow today’s trade activity closely until the 3 p.m. deadline.

“I’ll be probably looking at stuff most of the day,” Okposo said following Sunday afternoon’s 4-1 win against the Boston Bruins before 18,522 fans inside KeyBank Center. “It’s an exciting day for the league.”

While deadline day is always highly anticipated by fans, most players dread it. The hours leading up to it can be some of the most anxious they experience in their careers.

Most of them try to shrug it off, say it’s part of the business. But make no mistake, they worry about what could transpire.

Okposo probably knows he can relax today, a day off for the Sabres. Given he’s one of their top scorers and two seasons into a seven-year, $42 million contract, he’s likely staying put.

Most of his teammates, however, are in play. The Sabres, despite winning the season series from the Bruins, have endured a miserable five months. They should make some moves today.

Winger Evander Kane, who was held out again Sunday, the second straight day the Sabres scratched him rather than risk an injury, will almost certainly be dealt.

Kane, an unrestricted free agent in July, has commanded most of the attention in recent days. The 20-goal scorer could bring the Sabres three or four notable pieces in return.

But the Sabres have other veterans playing on expiring contracts teams could procure for just a mid-round draft pick.

For example, Benoit Pouliot, 31, has quietly been one of the Sabres’ better wingers for stretches this trying season. He scored his 12th goal Sunday, putting the Sabres up 1-0. If a contender wants a cheap depth addition for its third or fourth line, they might look at the former fourth overall pick.

Pouliot, who signed a one-year contract July 1, has played for seven teams but has never been traded on deadline day.

If Pouliot’s nervous about getting dealt, he wasn’t showing it after Sunday’s victory, just the Sabres’ ninth at home and 19th overall. Perhaps moving around so often has helped him deal with the uncertainty better than most players.

“We have off tomorrow so (it’s) for me, the kids, the family,” he said. “Whatever happens, happens. It’s always an interesting day during the year. … There’s always something going on. You hear the rumors and stuff, but we’ll see.”

Naturally, they talk about their own players.

“Jason and my vision are very in the same direction,” Housley said.

The Sabres would’ve headed in a different direction this season if they played most teams like the Bruins, who have 82 points. They won three of the four meetings against their Atlantic Division rival.

No one, however, could quite explain why the Sabres had Boston’s number. Housley, Okposo and defenseman Nathan Beaulieu all responded quickly with “I don’t know” when asked about it.

“We know where they are in the division and we knew the big trade (acquiring winger Rick Nash) might give them some jump,” Housley said. “We were ready for it.”

Beaulieu said: “We come to rise against good teams. We know what’s at stake, we know they’re a good team, they’re going to bring their best. I think we got to try to mindset every night.”

The Sabres brought an awful mindset in Saturday’s 5-1 loss in Washington. The Capitals scored 50 seconds into the tilt and three times in the final 10:13.

Clearly, the deadline was on some players’ minds.

“We were ready to play from the drop of the puck,” Okposo said. “We had a good first, carried it right over to the second. Even when they got that goal (3:35 into the second), I still didn’t think they had much. … I thought that we controlled the play for the most part.”

Housley said: “It just goes to show you when everybody’s focused and prepared and ready to play, playing for each other, we’re a different hockey team.”