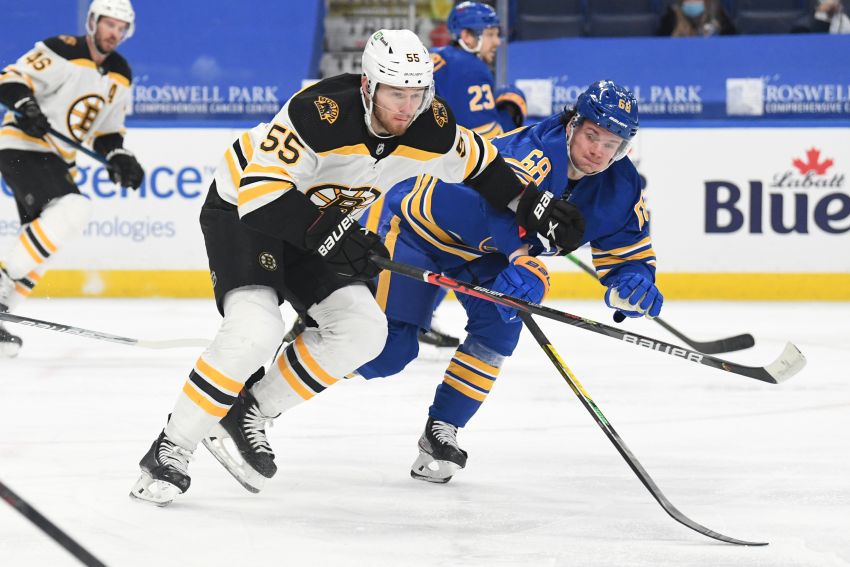 BUFFALO – At least the Sabres have started drawing penalties. At various times over the past two months, simply getting a man advantage was an accomplishment.

In Thursday’s 5-1 loss to the Boston Bruins, the Sabres enjoyed five power plays. In Tuesday’s 2-0 setback to the Bruins, they had six.

The Sabres have consistently moved their feet and played aggressively to force the Bruins into taking infractions.

They just can’t convert their opportunities. They’re zero of 11 over the past two games. In the last 30 outings, they scored on just five of their 68 attempts, just 7.4%.

The Sabres’ power play, perhaps their greatest strength earlier this season, has morphed into the NHL’s worst.

“Those are moments in the game where you can kind of turn the tide, gain some momentum and capitalize and get a get a goal,” Sabres winger Jeff Skinner said on a Zoom call. “We’re not doing that.”

While they lost by four goals Thursday inside KeyBank Center, they had all five power plays in the first two periods when they were either tied or trailing by one goal.

“It’s frustrating, for sure,” Sabres center Casey Mittelstadt said. “If we get a power-play goal there with all the penalties in the second, it’s a different game.”

Prior to Thursday’s game, interim coach Don Granato said he showed the Sabres video and addressed how they’ve developed a passing mentality on the power play instead of shooting.

Hours later, the Sabres sprinkled only five shots on Bruins goalie Jeremy Swayman on the man advantage. The Bruins have the NHL’s top penalty kill.

“There’s got to be some simplifying,” Mittelstadt said. “Sometimes if you get a shot, you got to take it and make a play off the shot. I think that breaks down the PK a lot.”

Granato said the Sabres carried their frustrations from the first power-play attempt into the rest of the game.

After Brad Marchand opened the scoring, Sabres winger Arttu Ruotsalainen’s third goal in his eighth NHL game tied it 5:27 into the second period.

Cozens, who was moved up to the No. 1 power-play unit, created the score by stealing the puck from Sean Kuraly inside the Boston blue line. Ruotsalainen buried linemate Anders Bjork’s pass as he zoomed to the net.

The aggressive goal can serve as a blueprint for the Sabres.

“We have to play that way to be successful in the game of hockey,” Granato said. “So hit the reset button on that over and over and that’s what we want to do over and over, shift after shift. The Mittelstadt line had a couple of cases that were similar. That pressure, playing with that energy.

“For us, it’s a process of being able to do that each and every shift. Stay consistent, not allow frustration to come in. … That was something that we want to replicate over and over.”

They’re 0-4-1 against the Bruins this season.