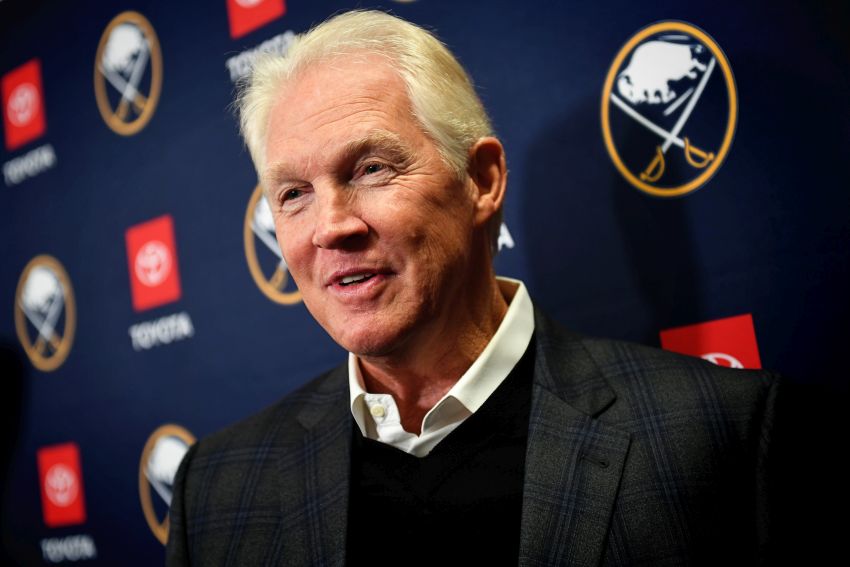 BUFFALO – Jim Schoenfeld had planned to retire from the New York Rangers’ front office for three years. Then team president Glen Sather would convince the former Sabres captain to return for “one more kick.”

“I loved the guy and we really had fun working together, so (I decided) ‘Eh, I’ll do one more (year),’” Schoenfeld said Nov. 2 inside KeyBank Center. “It wasn’t like I didn’t like the job. I really still do.”

But Schoenfeld, 67, said he started weighing time as his age advanced. He and his wife, Theresa, had children and grandchildren they wanted to see more often.

“You just say, ‘You know, how much longer do I want to stay away from them?’” Schoenfeld said. “That’s sort of what it comes down to.”

So in May, Schoenfeld resigned as the Rangers’ vice president and assistant general manager.

Almost 47 years after the Sabres drafted him fifth overall, he left the NHL on his own terms.

“It just seemed like the right time,” he said. “It was a great time while I was there. I left with only good memories. Probably a better way to go than have somebody else show you the door.”

Schoenfeld, who has settled in Scottsdale, Ariz., now has time to attend events like the 70s Night celebration the Sabres held earlier this month.

While Schoenfeld returned to Buffalo plenty of times over the years, it was usually in an official capacity with another team. He hasn’t been a part of the Sabres since they fired him in early 1986 after only 43 games as coach.

For a generation of Sabres fans, seeing Schoenfeld on the ice again wearing his No. 6 Sabres jersey during a pregame ceremony was probably special.

The affable Schoenfeld seemed to be smiling the entire night. When he spotted former Sabres defenseman and broadcaster Mike Robitaille before the game, the friends shared a hug and some laughs.

Schoenfeld, of course, is one the greatest players and most iconic figures in the Sabres’ 50-year history. He was so popular he recorded two albums in his early 20s and was a spokesman for City Mattress long after he retired.

His memorable fight with the Boston Bruins’ Wayne Cashman on Dec. 13, 1972 – they crashed through the Zamboni doors in Memorial Auditorium before dropping their gloves – remains one of the seminal moments in franchise history.

“It was a pretty big step as a team that the Buffalo Sabres, as a team, can go on the ice and (win) the game, and we can compete with arguably the best team in the league, and we can even hang in there to some degree physically,” Schoenfeld said of the fight.

The team-record plus-60 rating Schoenfeld compiled in 1979-80, the season he finished third in the Norris Trophy voting, will likely never be broken.

Schoenfeld credits legendary defenseman Tim Horton, who was killed in a car accident Feb. 21, 1974, for his successful career.

“There couldn’t have been a better partner for a young defenseman to break into the National League with,” Schoenfeld said. “The example he set. He was 42, I was just turning 20, and I don’t think there was a player who would disagree he was by far the best-conditioned athlete on our team and worked hard.

“He didn’t cruise, even at 42, and in those days, that was old. He looked like Tarzan, he just did everything hard.

Like many ex-Sabres, Schoenfeld’s time in Buffalo remains a special part of his life. He spent parts of 10 seasons here over two stints – remember, he came out of retirement in 1984-85 for a 34-game run wearing No. 13 – before his brief tenure as coach.

He still tries to visit every summer.

“We had four children born here, raised here,” he said. “This was home for a long time for us. I always say the people of Western New York, there wasn’t a player-fan relationship (better) for me. They made us feel like we were part of the family, they really did. And not only the players, but our wives, our families.

“So it was always like coming back home here. That’s why we certainly keep the ties – great people, great, close friends and then great extension of what people would call fans, but they were friends.”