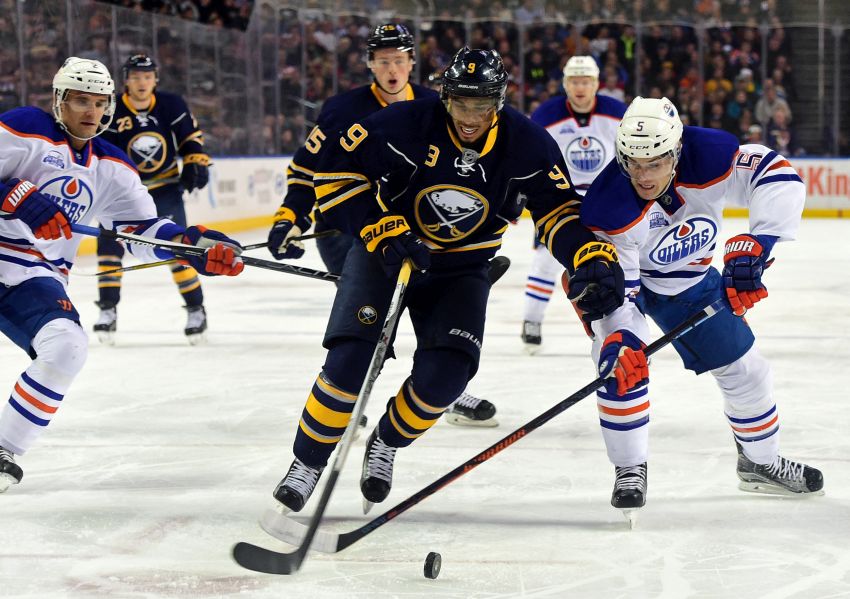 Evander Kane (9) has been one of the Sabres’ steadiest goal scorers. ©2016, Dan Hickling, Olean Times Herald

BUFFALO – In his last three starts, goalie Robin Lehner has been the Sabres’ backbone, stopping 100 of the 105 shots opponents have pumped on him, a gaudy .952 save percentage.

For his efforts, thanks to just a single goal of support, Lehner earned zero wins.

For the first time since 2010-11, the Sabres could have four players – Jack Eichel, Evander Kane, Ryan O’Reilly and Sam Reinhart – reach the 20-goal mark.

Still, those talented forwards have accounted for 69 of the team’s 147 goals – 47 percent – through 64 games entering tonight’s home tilt against the Calgary Flames inside the First Niagara Center.

Right now, only a handful of players contribute to the Sabres’ 29th-ranked offense (2.3 goals a game). They receive little secondary scoring. Despite adding some frontline talent this season, the offense is still anemic.

After dispersing many of their best players, the Sabres set a full-season NHL record-low by scoring only 150 goals two seasons ago. They upped that to 153 last year. This season, of course, they’ve improved, albeit it only marginally considering the pathetic teams they fielded for two years.

At their current pace, the Sabres would score just 188 times over 82 games, the third-lowest full-season total in franchise history. They’ve been shut out or held to one goal in eight of the last 18 games.

Why is the offense, which has 38 power-play goals, so weak? Most notably, several players’ production has fallen off a cliff.

– Winger Matt Moulson, a three-time 30-goal scorer, has five goals all season and only one goal in 51 games since Nov. 1.

– The Sabres have received just 21 goals from their defensemen. Rasmus Ristolainen has scored eight.

“That’s something … we need to do a better job of, jumping up in the rush and making sure we’re all part of the offense,” said Kane, who skates on the Sabres’ only true scoring line beside Eichel, the center, and Reinhart.

Ennis, despite his slump, likely would’ve started scoring at a better clip given his past exploits. The Sabres have only seven goals in five games since O’Reilly, the team’s lone NHL All-Star and top center, hurt his right foot.

“You’re taking out guys, who career-wise, have put up 50-point years, 20-goal seasons,” Bylsma said. “When you don’t have that, now you have to manufacture goals in different ways. I don’t think we can expect to get our goals with pretty goals or tic-tac-toe.

“We have to manufacturer them with good old-fashioned grit and good-old fashioned pucks and bodies to the net. That is what I expect from the team. We should be able to do that with the group we have.”

“We’re in a funk right now scoring goals,” Foligno said. “We’re really not getting more than one right now, so it’s pretty frustrating.”

That’s partly why Lehner’s record is 4-7-3 overall despite having a sparkling 2.29 goals-against average and a .933 save percentage. The Sabres have been shut out or scored one goal nine times in his 16 starts.

“I don’t sense any frustration or any thought about the lack of (goal) support for Robin right now,” Bylsma said. “In his mindset and his demeanor, he’s been strong and consistent in net.”