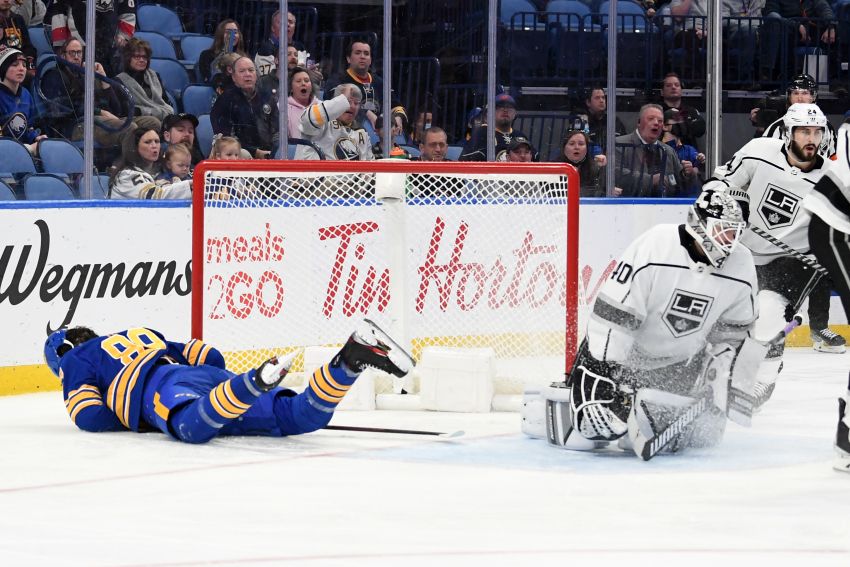 Alex Tuch was in pain after crashing into the goalpost Sunday afternoon. ©2022, Micheline Veluvolu

Tuch quickly chased after the puck, and as he zoomed toward Los Angeles Kings goalie Cal Petersen, he lost his balance and crashed head first into the left goalpost.

After staying down on the ice face first for a minute or two, Tuch, 25, skated to the dressing room on his own and did not return to the Sabres’ 3-0 loss.

Sabres coach Don Granato said Tuch, who appeared to hit his shoulder, did not suffer a head injury.

Granato said Tuch underwent some X-rays at KeyBank Center and was leaving the rink to have more.

“He’ll be sore because of the impact, but the testing here was as positive as it could be,” he said. “Now we’ll get some imaging to make sure it’s nothing more that could be hidden.”

Granato did not know if Tuch would be available for Monday’s home game against the Florida Panthers.

“It’s leaning toward that he’s going to be sore in the morning,” Granato said. “There’s nothing with the head. They did all the testing they needed to for the head and ruled out any impact there.”

Tuch, part of the Jack Eichel trade with the Vegas Golden Knights, did not play his first game with the Sabres until Dec. 29 because he underwent offseason shoulder surgery.

Losing Tuch, of course, would be significant. The Baldwinsville native has compiled seven goals and 23 points in 25 games this season.