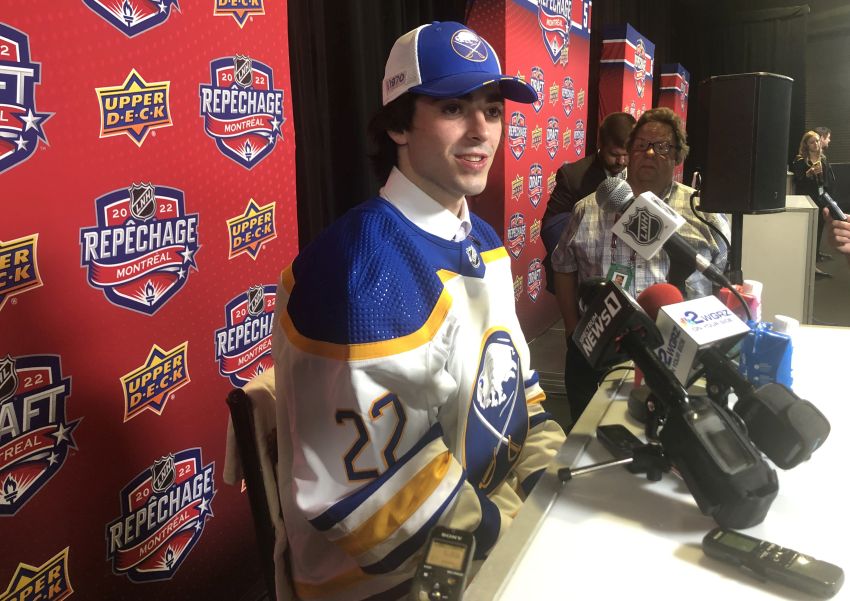 Matthew Savoie was all smiles Thursday. ©2022

MONTREAL – Centers are perhaps the most precious commodity in hockey, and the Buffalo Sabres had built up an impressive stockpile of them before they selected Matthew Savoie ninth overall, Noah Ostlund 16th and Jiri Kulich 28th at the NHL Draft on Thursday.

In 18-year-old youngsters, the Sabres picked three of the most talented pivots in the draft and added to perhaps the league’s deepest group.

In the NHL, the Sabres have skilled centers Dylan Cozens, Peyton Krebs, Casey Mittelstadt and Tage Thompson. Last year, they drafted Isak Rosen 14th overall. Even winger Jack Quinn, one of their top prospects, has played some center as a pro.

Thompson, who scored 38 goals last season, is the oldest, just 24.

“It’s a critical position,” Adams said of center after the first round ended Thursday inside the Bell Centre. “You can move guys to the wing. It’s a lot more challenging to move from wing to center. So … really, the top NHL teams, you have good centermen, and we feel that we added some talent to our lineup.”

He added: “I like the way guys compete and play direct and play fast, and that’s what this group does. It was a good day for us.”

It was a life-changing day for Savoie, Ostlund and Kulich.

“Just excitement for me,” a smiling Savoie said of being drafted. “I was a bit nervous coming into the day. You can (feel) a lot of pressure sometimes. But now that you get finally picked and you have a destination, I think you really set your eyes on a goal and really start to get to work.”

“From a confidence standpoint, it just skyrocketed,” Savoie said. “I felt more comfortable with the puck on my stick, more comfortable reading plays. So I think just growing as a player and getting older as a player was huge for me. And I think that’s what allowed me to have more success this year.”

He mustered zero goals and assists points in 22 outings as a rookie with Winnipeg in the COVID-19 pandemic shortened season but starred for Dubuque, registering 21 goals and 38 points in 34 contests.

Savoie played that season with Krebs and even roomed with him a bit.

“I got a few games with Krebsy, it was pretty cool,” he said.

Savoie played under former Sabres defenseman and assistant coach James Patrick with Winnipeg. He said Patrick is a “true pro” who’s always dialed in and focused.

“I think it just wears off on guys to be the best version of themselves, really be focused on the goals,” Savoie said.

Adams said he spoke to Krebs and Patrick, someone he knows well from their days of Buffalo’s bench, about Savoie.

“Elite hockey sense, high motor, elite skater,” Adams said of Savoie. “He can score. I mean, he’s a finisher. Highly, highly competitive. High motor. For me, that’s a big deal, guys that just never stop, they just keep going and going. That’s what we saw when we were scouting him. I did due diligence.”

Savoie underwent shoulder surgery this year but he said he has fully recovered and started skating again.

“It’s just getting the strength back, continuing to manage my workouts and making sure I’m not pushing it too hard too soon,” he said.

Meanwhile, the 5-foot-10, 164-pound Ostlund compiled nine goals and 42 points in 32 games with Djurgardens’ junior team in Sweden last season and zero points in 11 outings with their big club.

“I play with great hockey IQ and my skating is one of my best assets, too,” said Ostlund, Central Scouting’s 18th-rank European skater. “So I would describe myself as a smart two-way centerman.”

Ostlund said he “had a couple of meetings” with the Sabres that “felt very good.”

He starred at the recent World Under-18 Junior Championship, scoring four goals and 10 points in six games as Team Sweden captured the gold medal.

“The biggest day after this day,” Ostlund said of winning the tournament.

“One of the top that we’ve seen in a while for this age,” he said.

Sabres owners Terry and Kim Pegula did not attend the Thursday’s first round. Kim, who’s also team president, is recovering from a recent health issue. Their son, Matthew, was on stage with the team’s brass.