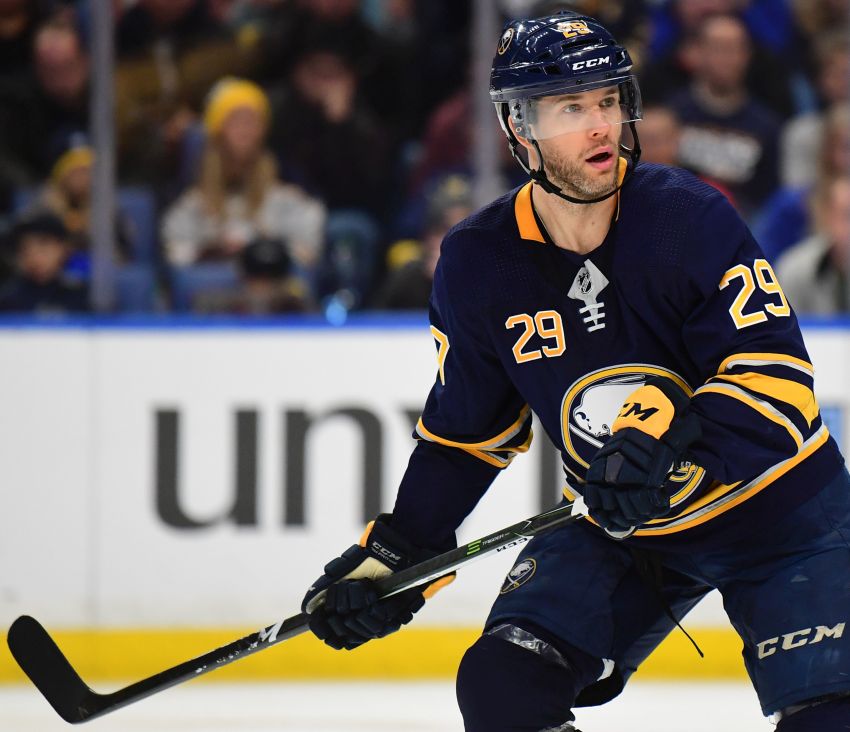 BUFFALO – Martin Biron said he remembers it like it happened yesterday. After the Sabres’ stunning run of 10 consecutive wins to open the 2006-07 season ended, coach Lindy Ruff walked in the dressing room, looked around and grabbed a marker.

“Everybody’s heads were down, everybody was mad, everybody was angry that we had lost a game, right?” the former goalie said of the 5-4 shootout loss to the Atlanta Thrashers on Oct. 28, 2006 inside what was then called HSBC Arena.

Ruff often left his players alone following games, but on this occasion he wanted to laud one of the greatest accomplishments in franchise history. So he wrote “10-0-1” on the white board.

“Then he turned around and he goes, ‘That’s pretty darn good,’ almost to say, ‘Hey, there’s nothing to be ashamed of, nothing to be mad about, this is an unbelievable feat and we’re just going to keep it going,’” Biron said Monday.

How unbelievable was it? In the Sabres’ 48-year history, they’ve only won 10 consecutive games one other time, about halfway through the 1983-84 season.

The upstart Sabres, who finished dead last a season ago, can rattle off their 10th straight win tonight against the San Jose Sharks inside KeyBank Center.

“We’re going into games not scared to lose,” said Sabres winger Jason Pominville, the only player left from the 2006-07 team. “We expect to win. That’s a big thing for me. Last year, when things probably weren’t going our way, we would get into our shell.

“Now we’re fighting back, we’re trusting our instincts, trusting the system, sticking to what has led to us having success so far. It’s paid off.”

The Sabres’ nine-game streak has brought back special memories of 2006, when that torrid run kicked off a rollicking 53-win, 113-point season in which they earned the Presidents’ Trophy and returned to the Eastern Conference final.

“It’s no different this time,” Pominville, who returned to the Sabres in 2017 after more than four years with the Minnesota Wild, said of the current streak. “I think, as a team, we’ve found a lot of different ways to win. We’ve come back, we’ve had leads, we’ve had great goaltending. Special teams have won us games. It’s been a complete team effort.

“It’s nice for the guys that have been here for a while to finally see what this city is all about when you win.”

These days, the Sabres are emerging from a seven-year funk and a 31st-place finish in 2017-18. They haven’t made the playoffs since 2011. The streak has vaulted them to the top of the NHL again and given them relevance in the hockey world.

Twelve years ago, Buffalo went gaga over the Sabres, a potent team led by co-captains Daniel Briere and Chris Drury. Nothing eclipsed the Sabres’ popularity. Their new blue “slug” jerseys were the hottest item in town. The rink was raucous most nights as the wildly entertaining team piled up wins and goals.

“To get a ticket for a game for a family or an evening was the most exciting thing you could possibly do at that time,” former Sabres defenseman Brian Campbell said.

He added: “The people, they couldn’t get enough of it.”

“Sometimes you’re just walking around trying to wear a hood just so you could go grab some groceries,” Campbell said.

Just four months before the Sabres roared out of the gate, they had completed a thrilling run to the Eastern Conference final. Their slick style seemed to be the blueprint for success in the post-lockout NHL.

While the Sabres fell to the Carolina Hurricanes in seven games, the season felt like the beginning of something special. If the Sabres hadn’t lost most of their regular defensemen to injury – only Campbell and Toni Lydman played Game 7 – they might’ve competed for the Stanley Cup.

“There was a sense of we can do great things here, we can really take it a step further and win it all,” Biron said. “So we didn’t go into the summer kind of, ‘Hey we achieved so much and it was so great, let’s party all summer.’

“I think the feeling going into the summer was, ‘Man we were so close, and if it hadn’t been for all of our defense getting hurt, we would’ve had a Cup. Let’s really hunker down in the summer so we don’t skip a beat next year.’”

So by October 2006, the Sabres’ confidence was soaring.

“It was business as usual almost,” Biron said of winning. “We were feeling like, ‘Hey, we should’ve been 10-0 to start the season, we’re that good.’ It wasn’t out of the ordinary.”

“We got that buzz right away where, from the year before, it carried over,” Pominville said.

The Sabres won their first two games in shootouts and each of their opening four contests by one goal.

The NHL’s highest-scoring team, of course, throttled some opponents. The Sabres beat the New York Rangers 7-4 on Oct. 14, barely a day after a surprise snowstorm wreaked havoc in and around Buffalo.

“You feel like nobody’s going to show up,” Campbell said. “The whole building was completely packed.”

Three days later, the Sabres annihilated the Philadelphia Flyers 9-1. The Flyers fired their coach, Ken Hitchcock, the next day.

Biron said the Sabres’ eighth win, a 6-2 road triumph against the Boston Bruins, was “probably the most nerve-racking game I’ve played in.”

“You’re the backup goalie, you don’t play every game,” Biron said. “You don’t want to be the one who loses the game and the streak, right?”

The current streak has caught Campbell’s attention. He seems sold on the Sabres and hopes he can watch them up close later this season.