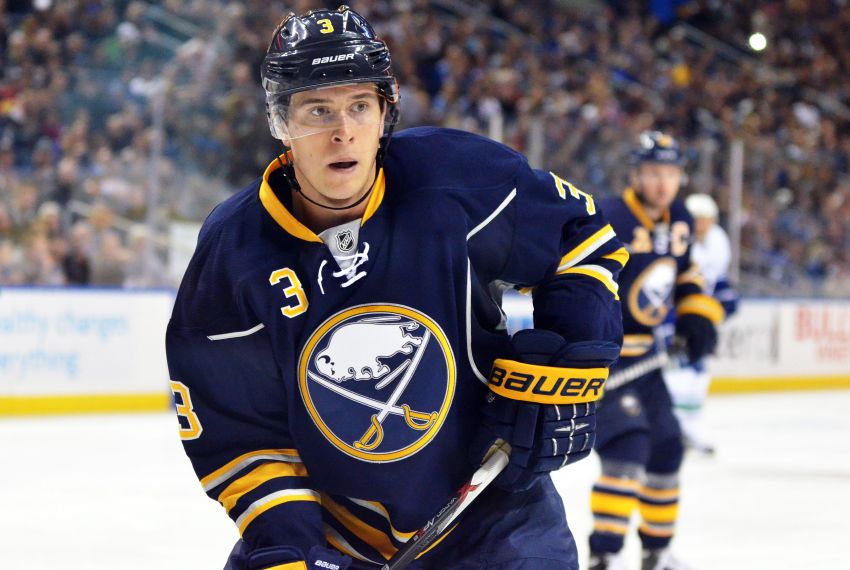 BUFFALO – First, as Mark Pysyk was sitting in his stall talking to a reporter Tuesday, Zemgus Girgensons approached the defenseman, extended his hand and smacked his roommate across the cheek.

“What’s that about?” Pysyk said as Girgensons scurried off.

Girgensons, the likable Pysyk said, was “going to get it bad.”

“I think it’s a tight group and … what you’re seeing in the locker room is the future,” coach Ron Rolston said Tuesday after the Sabres prepared for tonight’s tilt against the Boston Bruins inside the First Niagara Center.

But forget about the future. The popular Pysyk is already a major part of the Sabres. Just 29 games into his NHL career, the 21-year-old has morphed into one of the struggling team’s top players.

Pysyk, a calm and cool customer on and off the ice, has been one of the 1-8-1 club’s few bright spots, skating more than 20 minutes a night, mostly beside No. 1 defenseman Christian Ehrhoff.

“We’ve developed some really good chemistry,” Ehrhoff said about Pysyk, his partner since opening night. “He’s really poised. He doesn’t do things in a hurry. We use each other well. I’ve enjoyed playing with him so far.”

Rolston lauded Pysyk on Monday, using a question about leadership to mention his fine play.

“The first phase is you have to be consistent and you have to be capable, and that’s where your leadership comes from,” Rolston said. “So guys like Mark Pysyk, he goes out every night, he’s going to give you the same thing every single night.”

That’s an efficient, steady game devoid of any flashiness. Pysyk’s at his best when he’s going unnoticed.

“You wouldn’t even know some nights he’s out there,” said Rolston, who also coached Pysyk in Rochester last season. “But he’s a lot of times one of our better guys back there.”

Pysyk added: “I don’t know if that’s a sign of leadership for me yet or whatnot, but I’m just trying to be consistent.”

Sabres defenseman Henrik Tallinder, Pysyk’s partner some of the preseason, said the youngster “plays very mature, never leaves where he’s supposed to be.”

“As a defenseman, the hardest thing for a young guy is maybe be patient and wait for the play to come to you instead of trying to go to where the play is,” Tallinder said. “He’s very patient and efficient and good at positioning himself.”

Part of Pysyk’s productivity comes from his maturity. He almost always maintains the same demeanor, never looking angry or rattled.

“He’s a fun kid to be around, that’s for sure,” Sabres co-captain Steve Ott said. “He’s got the tools to be a heck of a defenseman for a long time. His experience is changing daily, but his emotional level, his highs aren’t high, his lows aren’t lows. That’s probably what’s making him a complete defenseman every single day.”

“That’s a tough question,” he said. “I don’t know. I don’t really get rattled that easily. I try to be smiling and happy as much as possible. That’s my comfort for me, obviously, upbeat kind of energy instead of moping around.”

Still, Pysyk’s only human, you know. He acknowledged “every game there’s a play or something that rattles me.”

“But I think that my way of dealing with getting rattled is just not showing it and moving on,” he said.

His personality, Pysyk said, might come from his father, someone he called a “pretty patient man.”

“If he ever gets rattled, (he) thinks things through,” Pysyk said. “He doesn’t react on his adrenaline. It’s obviously different playing hockey than just living a normal life. … There’s no point in being miserable all the time. Things could be a lot worse. On your worst day it’s just fine. You got to enjoy it while you’re here.”

Given Pysyk’s age and that the 31-year-old Ehrhoff’s just starting the third season of a 10-year contract, the two could skate together for a long time.

“I still feel like a kid, I think, a little bit every time I go out there,” Pysyk said. “It sort of hits you that it’s the NHL, playing in the NHL with Christian Ehrhoff. It’s pretty cool. I don’t know how long it’ll last, but I’m enjoying it right now.”

Notes: Rolston wouldn’t say if the 18-year-old Zadorov, fresh off his NHL debut, would play again tonight. The Russian defenseman has been skating beside Jamie McBain, his partner much of Saturday. … Ville Leino, out since cracking a rib opening night, practiced again Tuesday. The winger hopes to return later this week. Tonight is unlikely, however. “It’s hard to say percentage-wise, but I’m getting close,” Leino said. “I don’t have that much pain anymore.”