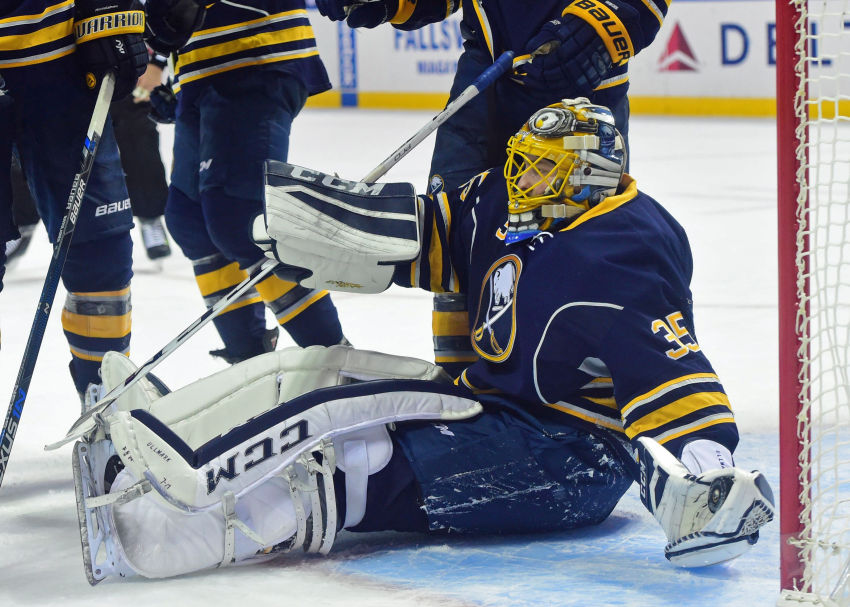 BUFFALO – Three games, that’s it – just a blip in a marathon season. But in the what-have-you-done-for-me-lately NHL, Linus Ullmark’s small body of work is enough to convince some the rookie should be the Sabres’ new starting goalie.

Following a so-so debut, Ullmark dazzled in his second straight start Sunday, stopping 29 shots in the Sabres’ 2-1 road win against the New York Islanders. On Friday, the prospect made 27 saves in a 3-1 home victory over Philadelphia.

The Sabres, having lost unproven starter Robin Lehner to a high ankle sprain for six to 10 weeks on opening night, need a new No. 1 goalie. Backup Chad Johnson has subbed admirably at times, although the journeyman, 29, likely isn’t in the team’s long-term plans.

Enter the 6-foot-4, 212-pound Ullmark, a 2012 sixth-round pick who had surgery on both hips in April. Could the Swede, 22, be the answer just six games into his North American career?

Sabres coach Dan Bylsma, while enthusiastic about Ullmark, claims he hasn’t wondered if the youngster could be the guy for the Sabres. Before a reporter finished the question Tuesday, he responded “no” twice. Heck, Bylsma wouldn’t even say if Ullmark would start Thursday against Tampa Bay.

Ullmark, of course, will almost certainly receive the nod when the Sabres go for their first three-game winning streak since December.

Right now, Ullmark’s just trying to live in the moment.

“It’s great, it’s perfect,” Ullmark said about playing in the NHL. “It’s a dream come true. You just got to live in the present. You can’t live in the future or the past.”

Ask Bylsma or Ullmark’s teammates about him, and they inevitably mention his demeanor. Ullmark doesn’t get rattled easily.

“If you get a chance to talk to this kid, he’s pretty calm and cool and laid back,” Bylsma said following practice inside the First Niagara Center. “He doesn’t show a lot of pressure … given the situation. Even the game he started (Sunday), I just remarked how calm and collective he is in net for us.”

“When you watch him prepare and warm-up, he’s very calm and very relaxed,” he said. “I think anytime you see a goalie that way, it kind of has an effect on the group. You kind of go, ‘OK.’ You can kind of take a deep breath and relax with him. It’s a great thing to see from such a young goalie.”

Sure, Ullmark might be a neophyte in the North American game, but he’s a young veteran in professional men’s hockey. He played 35 games each of the last two seasons with MODO, a team in the Swedish Hockey League, one of the world’s best leagues. He even played a few games with MODO as an 18-year-old before the Sabres drafted him.

Clearly, that experience has helped him quickly adapt to a different game and the smaller ice surface.

Still, Ullmark missed most of training camp as he worked his hips back into shape. He played only three AHL games before the Sabres recalled him from the Rochester Americans.

“That’s crazy,” Sabres defenseman Carlo Colaiacovo said about Ullmark’s quick acclimation. “I’ve had some international experience. I know what the game’s like over there. There’s always an adjustment period.”

So how has Ullmark adjusted so quickly?

“It’s all stuff from practice,” Ullmark said. “You need to play every practice like it’s your last, or something like that. You just got to keep going and keep going every day. If you’re relaxing, you’re not going to be able to perform during the game. So actually practice like you play.”