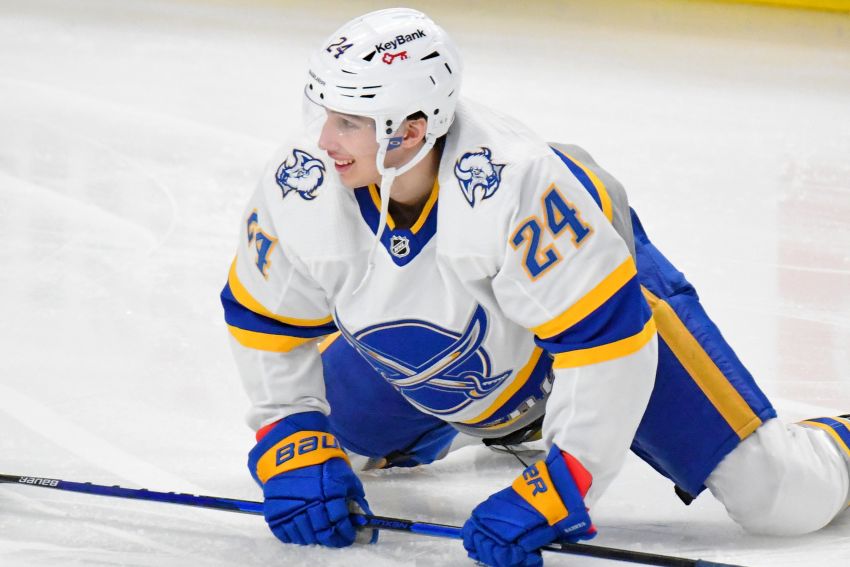 For now, rookie Dylan Cozens is the Buffalo Sabres’ No. 1 center. With captain Jack Eichel injured and veteran Eric Staal mired in a 22-game goal drought, the hapless team sorely needs a productive presence in the middle.

The Sabres shifted Cozens, 20, to right wing earlier this season so he could be eased into the NHL. But before he played 20 games, they moved him back to his natural position.

Cozens, the seventh overall pick in 2019, has pivoted Taylor Hall and Sam Reinhart on the top line in his last five appearances. Victor Olofsson replaced Hall for part of Wednesday’s game.

“He’s going to be a center until he’s not, until we need him on the wing for some reason,” interim Sabres coach Don Granato said on a Zoom call prior to Wednesday’s 5-2 road loss to the Pittsburgh Penguins. “He’s good wherever he is. He’s a talented hockey player. He can play each position. Maybe one instance we’ll shift him on the wing in a game if we go down to three lines and it works out that he fits better. The nice thing is we can move him around.”

Cozens’ maturity has impressed Granato and his predecessor, Ralph Krueger. The Yukon native plays an advanced game for a neophyte, especially on the defensive side.

Remember, the 6-foot-3, 188-pound Cozens never played a pro game prior to making his NHL debut Jan. 14. Earlier this season, however, he starred for Team Canada in his second World Junior Championship appearance.

“He’s an intelligent player,” Granato said. “You think about where he’s at in his career now, what he went through in the last year. You’re a first-round pick. The spotlight is on you and you’re a world junior player two times in a row where the spotlight is on you. You came to training came last year, you went through all those experiences. He’s a player that internalizes all of those things and actually soaks up the experience of it. Where some people just go through the experience and they don’t gain the wisdom, the insight, of having experienced that.

“Dylan processes those things really well, really fast. He’s a fast learner and you combine that with his skill, his talent and his character and his competitiveness, which we’ve seen, you really have an exciting prospect and player. He’s already a very good NHL player, but I say prospect because he’s going to grow and he’s going to continue to grow fast.”

Cozens has compiled four goals and six points in 22 games this season. He played a career-high 19 minutes, 12 seconds in Monday’s 5-3 road loss to the New York Rangers.

He returned from an upper-body injury last week.