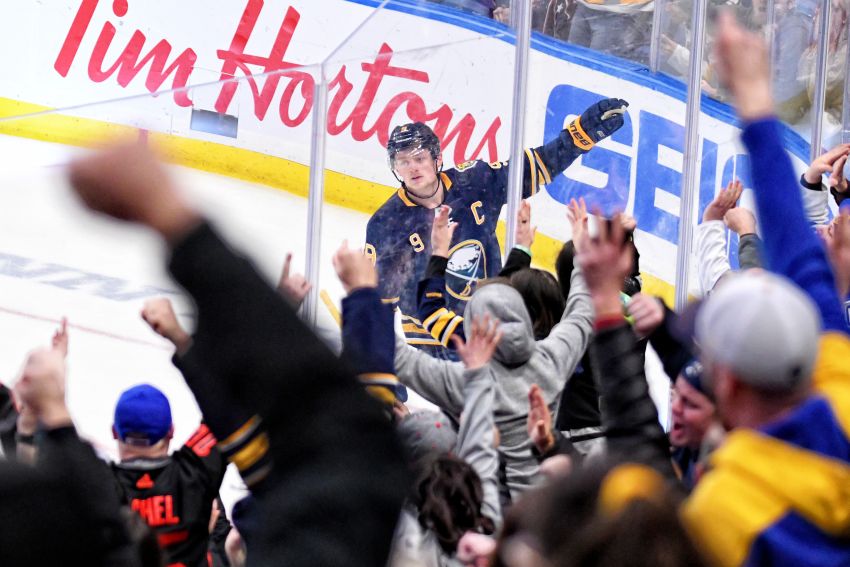 Jack Eichel hasn’t had a chance to celebrate in front of Sabres fans in nine months. ©2020, Micheline Veluvolu

The COVID-19 pandemic contributed to the Buffalo Sabres’ value dropping 4% to $385 million in 2020, according to Forbes estimates.

Only three NHL teams – the Arizona Coyotes, Florida Panthers and Columbus Blue Jackets – are worth less the than Sabres, who lost $10.9 million in 2020, according to Forbes.

Forbes tabbed the New York Rangers as the NHL’s most valuable franchise, worth $1.65 billion. Four other teams – the Toronto Maple Leafs, Montreal Canadiens, Chicago Blackhawks and Boston Bruins – are valued at a billion dollars or more.

The average franchise is worth $653 million, a 2% dip from last year, marking the first drop since 2001, according to Forbes. Fifteen teams lost money in 2020.

The pandemic forced the NHL to pause the 2019-20 season March 12. In May, the league canceled the final three weeks of the regular season and announced it would hold the playoffs in two bubbles during the summer without fans.

The Sabres, who are owned by Terry and Kim Pegula, played 69 games last season and missed the NHL’s qualifying round by one point.

The NHL is reportedly moving toward finalizing an agreement for the 2020-21 season that would have a reduced schedule start perhaps in mid-January. Given it’s unlikely fans can attend games, teams will have trouble recouping some of their lost revenue.

According to Forbes’ story, information for their valuation “primarily came from the teams, sports bankers, media consultants and public documents, like arena lease agreements and bond documents.”