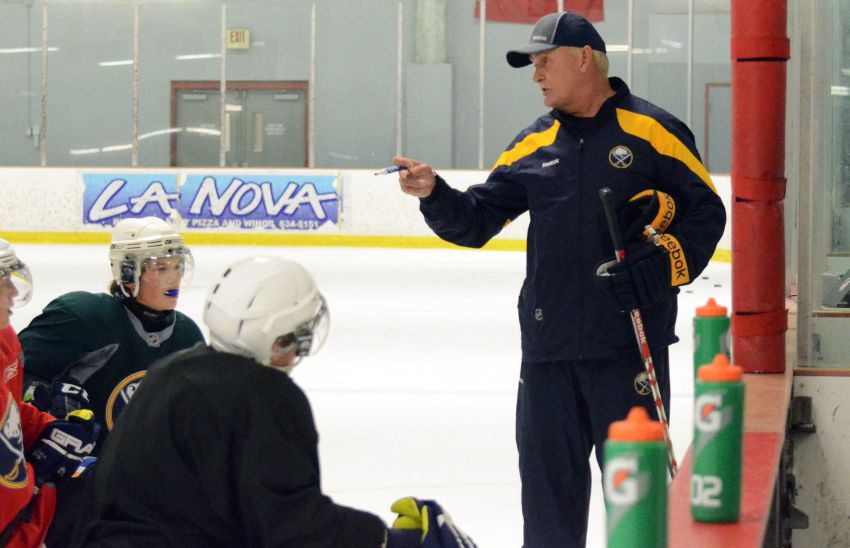 BUFFALO – The stumblebum Sabres have lost three straight contests and seven of eight. Tens tilts into the 48-game schedule, they have only three wins and seven points. They’re last in the Northeast Division and 14th in the Eastern Conference after falling 4-3 on Tuesday in Ottawa following a late rally.

“I think you’re always concerned,” coach Lindy Ruff said this afternoon inside the First Niagara Center after the Sabres practiced nearly an hour on a day they were originally scheduled to have off. “My job is to keep the morale up. I think the hope for the team has been real good. The guys have been positive, they’ve been upbeat.

“I thought they dug in, tried to come back in the game, tried to fight through the adversity. We were a toecap away from tying it on (Jordan) Leopold’s shot with the goaltender pulled. So you got to give them credit for really digging in.

But what about Ruff, who’s been around since 1997? Could these awful 10 games start the clock ticking on the NHL’s longest-tenured coach?

Sabres goalie Ryan Miller said, “That’s not something that we’re going to have to sit and worry about” now.

Ruff said he spoke with owner Terry Pegula this morning.

Some of the Sabres’ numbers are downright terrible. They’re 30th in goals allowed (3.70) and faceoff percentage (41.3, a full four percentage points behind Edmonton).

Ruff spent much of today’s session drilling the Sabres on playing faceoff losses properly. He estimated the Sabres chased the puck 70 percent of the time Tuesday.

“That’s hard hockey, and our faceoffs have to get better,” Ruff said. “That’s going to start with every guy in the dot at least trying to saw it off where we can get help to come in.”

The Sabres practiced today because they kn0w they must get better quickly, especially with Montreal, a team that throttled them 6-1 on Saturday, coming in Thursday.

Ruff went to the team’s leadership.

“(I) said, ‘You know, we need to work on some things. I think it would be a good idea if we could flip a day here or there,’” Ruff said. “It is a situation where we know we’re digging out of a hole. We got a lot of guys out. We got a lot of guys in new positions. There was lots of stuff to go over.”

Sabres captain Jason Pominville added: “I think it was something we decided as a group that we had some things to do, to work on. I think everybody hopped on board.”

Meanwhile, winger Patrick Kaleta (neck) practiced in a non-contact role for the first time since getting taken to the hospital on a stretcher last Tuesday.

“I’m available whenever the coaches may need me, no matter what the case may be,” he said.

“I think in all fairness that’ll be a coach’s decision and I’ll make a wise one on that,” he said.