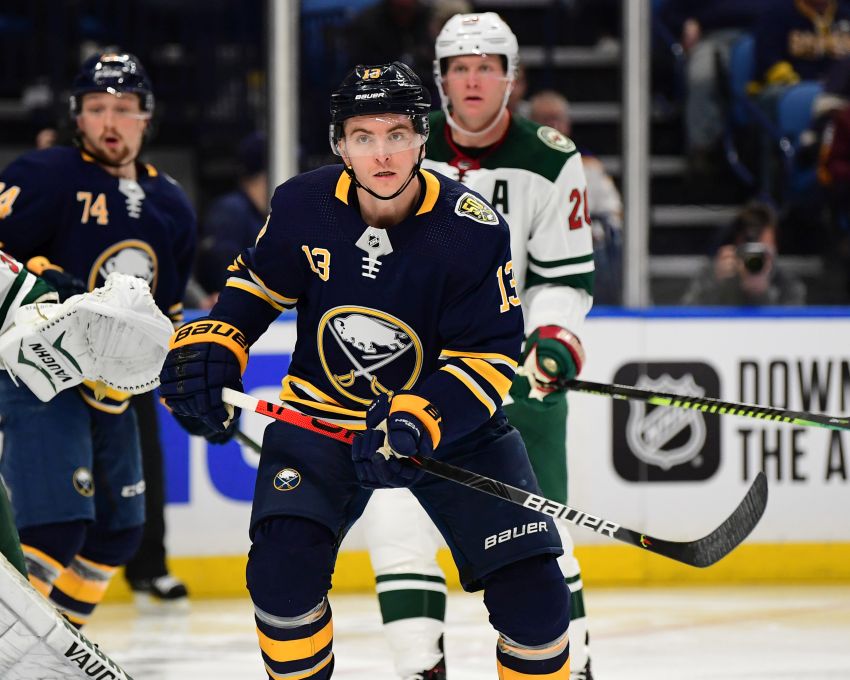 BUFFALO – When the Sabres acquired Jimmy Vesey in the summer, it seemed like he could earn an opportunity to play with top center Jack Eichel.

Of course, no one thought that chance would materialize after scoring zero goals in his first 18 outings. But right now, Vesey is the reeling Sabres’ No. 1 left winger.

“Getting put up there kind of gives you a shot in the arm and a little bit of a boost,” Vesey said of his promotion beside Eichel and Sam Reinhart.

Having lost eight of their last nine games, the Sabres desperately need a boost for tonight’s contest against the Boston Bruins, the start of a three-game road trip versus Atlantic Division opponents.

That’s why Sabres coach Ralph Krueger mixed up his lines for Wednesday’s practice, promoting Vesey and moving Victor Olofsson, Eichel’s left winger most of the season, beside center Rasmus Asplund and Casey Mittelstadt.

Krueger wouldn’t commit to using the new trios tonight. Still, considering the Sabres won’t hold a morning skate in Boston, it seems likely he will try them.

The game’s location probably factored in Vesey’s promotion. He and Eichel are Boston natives who played college hockey at home.

“There is some Boston energy in the group right now that is permutating right through the whole team,” Krueger said inside KeyBank Center.

Perhaps playing at home on the No. 1 line can help ignite Vesey, who said he’s “a little bit of a homebody.”

“There’s probably no better night for me to have a big game,” he said.

Vesey scored 50 goals over his first three seasons, including 43 at even strength. In a contract year on a new team, it felt like he could surpass the 20-goal mark.

“I’m going to get out of this,” Vesey said. “I’ve been able to score, contribute at every level, and I’ve done it at this level. So (it’s) just a matter of time right now.”

A goal or two from Vesey or one of his struggling teammates might’ve gone a long way in recent weeks.

The Sabres’ offense, like the rest of their game, has completely flatlined. Their collapse over the past three or four weeks has been downright stunning.

Their power play was lethal over that stretch, converting 12 of 39 opportunities (30.8%).

“We just got to stay patient,” said Sabres winger Victor Olofsson, who has scored six of his seven goals on the man advantage. “I mean, it was really good in the beginning of the year. I think we got to get back to that and keep it kind of simple.

“We don’t have to make the perfect play every time. Just get pucks to the net, get some greasy ones.”

The power play has become the only place Eichel and Jeff Skinner, one of the league’s top center-wing duos last season, play together. But Skinner has mostly skated on the second line with centers Marcus Johansson or Evan Rodrigues

Remember, when Skinner signed an eight-year, $72 million contract after scoring a career-high 40 goals in 2018-19, it seemed like he would be Eichel’s personal left winger for years.

So why has Krueger kept them apart?

“We want to spread out our scoring, we want a certain mix of offense and defense on every unit,” he said.

“We don’t want to burden Skins with too much of that,” Krueger said. “He’s doing a really good job without the puck … but he needs to create when he has (the) opportunity.”

Krueger liked the way Skinner, Rodrigues and Conor Sheary performed in Tuesday’s ugly 4-1 home loss to the Minnesota Wild, so he kept the line intact Wednesday.

To Krueger, Eichel and Skinner playing on the power play is their “best ice time together.”

“There’s no space where you play more together than (the) power play, so I disagree that he’s not playing with Eichel,” he said. “He’s playing with Eichel and has the privilege, predominantly, to play there on the PP. The five-on-five game is a tight one in the National Hockey League, and you need a balanced lineup to sustain success.”

Part of that balance includes shifting Mittelstadt, a center, to right wing. Mittelstadt, 20, has an 11-game point drought in which he has recorded only five shots.

“He’s trying to get in on the forecheck, trying to come back,” Krueger said. “He tracks as hard anybody on this team. So he’s doing a lot of good things, and he’s just got to bring it together and still be able to play the offense that he wants to.

“I think maybe freeing him up on the wing for a few games will be a solution.”

Olofsson and Asplund spent all of last season as linemates with Danny O’Regan on the Rochester Americans.

“It’s going to be a great line,” Asplund said.