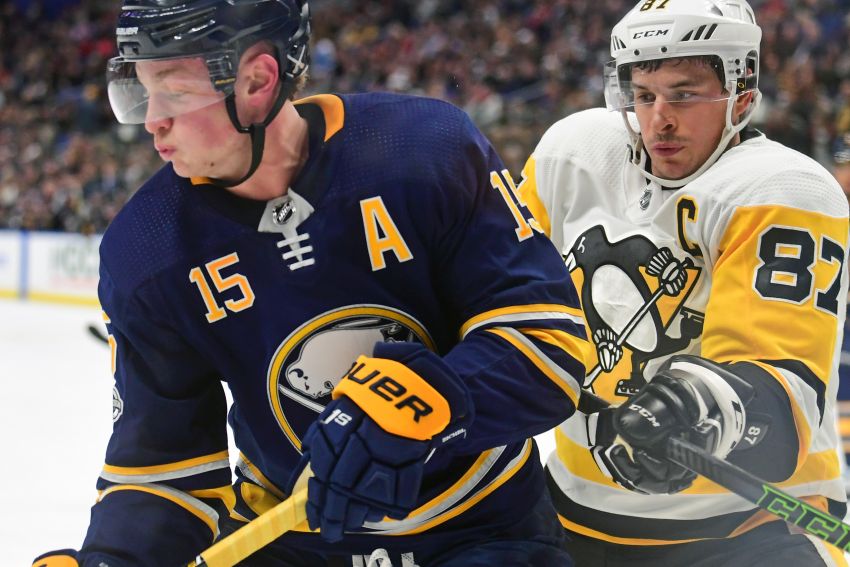 BUFFALO – The Sabres haven’t scored a goal in almost 181 minutes, have lost 10 of their last 11 outings and get booed off the ice following every period.

How bad are things right now?

In Friday’s 4-0 loss to the Pittsburgh Penguins, the NHL’s worst team possibly hit the lowest point in its 47-year history. Seriously.

For the first time ever, the hapless Sabres have been shut out in three consecutive games.

“There’s really no explanation,” Sabres goalie Robin Lehner said of the anemic offense. “This is very mentally tough right now. … There is no excuse for where we’re at and how things are going, but it’s the reality right now, and somehow we have to deal with it.”

The Sabres fired their coach and general manager in April, so a major shakeup like that is off the table. So far, GM Jason Botterill hasn’t made any moves. Heck, Botterill praised his team Thursday.

The Sabres, of course, could recall a player or two for tonight’s road tilt against the Penguins. But they’ll likely have to dig themselves out of this mess on their own.

“There’s a group of guys in that room that have to make a choice to turn it around,” Housley said. “It’s not going to be easy, it’s probably going to be one of the mentally tough things they’re going to have to deal with in their careers. Hopefully we’ll look back at this stretch and learn from it.

“But right now, we’re in the thick of it, there’s no easy way out. It’s about digging in and having a lot of pride and showing some emotion. When you get to this point, it gets down to each individual and they’re showing some emotion for the team and the team concept.”

The Sabres often show little emotion for the team concept, especially early in games. They’ve been outscored 26-13 in the first period this season.

The turnover was brutal.

“I made a bad play and they scored,” Ristolainen said. “It should not happen at this level.”

Why do the Sabres start games so poorly?

“I wish I could tell you, a mix of a lot of things,” Lehner said. “But … everything’s got to be better from each and every one of us. I think we’re coming out, we have (a) solid first couple of shifts, but we don’t gain the momentum we need, they come and they have some chances.”

Penguins winger Jake Guentzel scored before the period ended. When the horn sounded, many in capacity crowd of 19,070 inside KeyBank Center booed the Sabres.

“We’d like to provide some more cheering for our fans, they come and support us and we’ve got to do a better job at home,” Housley said.

Lehner said: “It’s mentally tough right now. I feel bad for the fans, I really do. They deserve better than this. I don’t have any answers.”

To Lehner, Housley and his staff prepare the Sabres well.

“The message has been great,” he said. “I think what’s drawn up or what we’re told to do, there’s nothing wrong with that. It’s up to us in here.”

The Sabres’ wretched stretch might continue for a bit. They start a four-game road trip tonight in Pittsburgh, where they haven’t won since April 23, 2013. The Penguins have a 14-game point streak (13-0-1) against them.

The Sabres actually outshot the Penguins 34-25. Still, they failed to exploit rookie goalie Tristan Jarry, who recorded his first shutout in his sixth NHL game.

At one point early in the third period, Sabres defenseman Zach Bogosian tried unloading the puck at the point and somehow shot it behind him.