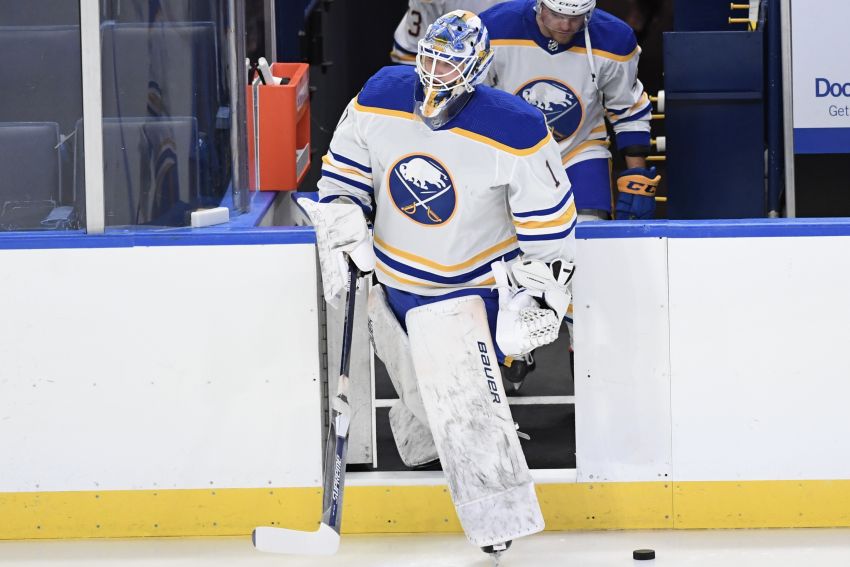 Ukko-Pekka Luukkonen has had an inconsistent season in Rochester. ©2021, Micheline Veluvolu

BUFFALO – Sabres prospect Ukko-Pekka Luukkonen has struggled at times this season, performing below expectations. Yes, the goalie has enjoyed some nice moments, including his first shutout with the Rochester Americans.

But ideally, Luukkonen, 22, would be in the minors right now honing his game. The reeling Sabres only recalled him Monday because they’re in the midst of a goaltending crisis.

Having lost goalie Malcolm Subban to injury in his debut Saturday, Luukkonen was the Sabres’ last option. They’re are also missing Craig Anderson, who’s recovering from an upper-body injury, and Dustin Tokarski, who’s in COVID-19 protocol and quarantining.

For the time being at least – the Sabres are hopeful Subban won’t be sidelined long – Luukkonen or winless veteran Aaron Dell will be playing behind their porous defense.

So, who will start tonight’s game against the Anaheim Ducks at KeyBank Center? Sabres coach Don Granato wasn’t sure.

The Amerks had all three of their games last week postponed due to COVID-19 protocol. So Luukkonen, who backed up Dell on Thursday, hasn’t played since Nov. 26.

Dell, meanwhile, has compiled awful numbers – a 0-5-0 record with a 4.52 goals-against average and an .872 save percentage – in seven outings this season.

“I don’t want to make that decision today because (Luukkonen) hasn’t been with us for three days, they’ve been going through COVID down there,” Granato said following Monday’s practice. “So he hasn’t had practice time.”

Whatever happens, Luukkonen’s stint in Buffalo – the Sabres used one of the two goaltender roster exemptions the collective bargaining agreement allows them – might be brief if Subban recovers quickly.

Subban, who was acquired Thursday from the Chicago Blackhawks, left the Sabres’ 6-2 loss to the Carolina Hurricanes after jamming his right foot on the post. Incredibly, he became the eighth goalie to play the Sabres in Granato’s 52 games as coach.

“We’re hopeful it’s not significant, and there’s some optimism that it’s not,” Granato said of Subban’s injury. “But we still don’t have the information. He’ll get more looks today from the doctor, and it could be very simple and it’s pointing that way.”

The Sabres offered Subban, 27, little help before he left Saturday’s game in the third period.

“It’s tough,” Granato said of Subban getting injured. “I feel for him, as I did the first goal against. We left the shooter wide open. … It’s a bummer for him, (there’s) this new energy and life and opportunity for him.”

The injury has created a fresh opportunity for the 6-foot-4, 196-pound Luukkonen, a youngster labeled as Buffalo’s goalie of the future years ago. So far, he has endured an inconsistent season, compiling a 6-6-0 mark with a 3.42 goals-against and an .888 save percentage in 12 contests.

He started slowly, registering an .818 save percentage in his first four starts. He rebounded nicely last month, however, earning AHL Player of the Week honors. Then he endured two rough outings before registering consecutive wins.

“A little bit ups and downs,” Luukkonen said of his season. “There’s been (a) really good stretch and really good games, too. So I think all around it’s been a really good year there.”

Games have been hard for Luukkonen to come by since turning pro in 2019. He hasn’t developed much of a rhythm, making just 64 appearances in North America, including 37 in the AHL.

After undergoing hip surgery in 2019, he did not return until that November. Then the COVID-19 pandemic ended his rookie season early. Last season, the pandemic forced the AHL to play a truncated 29-game schedule.

During Luukkonen’s brief run with the Sabres last year, he suffered a season-ending left ankle sprain.

“He’s staying competitive and working through it,” Granato said. “It doesn’t seem to affect the fiber of him, the competitiveness and outlook he’s had from Day One.”

Luukkonen said what he has gone through in pro hockey has “been interesting, to say the least.”

“But I think it kind of builds you up, too,” he said. “You can find good things about it, too. You have to be mentally strong to be able to get through those. If things are happening on the roster, you kind of got to battle yourself through those.”

Right now, the Sabres are battling through one of their worst defensive slumps ever. They’ve allowed 20 goals over their last three contests, their highest total since giving up 21 over a three-game stretch in February 1993.

Suspect goaltending has exasperated the Sabres’ defensive woes. They rarely get bailed out or receive game-changing saves.

Granato, who refuses to criticize his goaltending, said “little details” doomed the Sabres defensively during their three losses last week.

“The positive side is we’re scoring a lot of goals as well,” said Granato, whose Sabres have scored four or more goals five times in their last eight games.

Granato said if the Sabres try to win games 1-0 and 2-0, they’ll never improve.

“It’s easier now to actually refocus and – time will tell – pay attention to the defensive details, which I think the bulk … is paying attention to little subtleties, as the first goal the other night, two guys overskate the coverage area, just overskated it. …

“Today’s meeting was geared toward that, not allowing the opponent easy opportunities. We’re scoring enough goals to win and we’re not winning.”

Notes: Sabres defenseman Robert Hagg, who missed Saturday’s game because he was banged up, could play tonight, Granato said. … The Ducks are 11-4-2 since the Sabres beat them 4-3 in overtime Oct. 28. Their loss to the Sabres dropped them to 2-4-2. … Travis Moore, an emergency goalie, practiced with the Sabres on Monday. Luukkonen joined his teammates moments before the session started. With the exemption, the Sabres have 24 players on the roster, one above the limit.