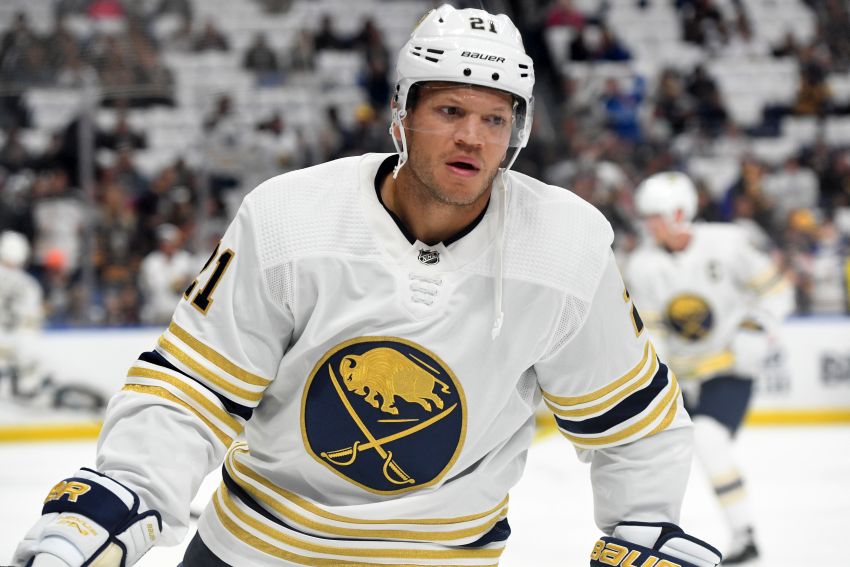 BUFFALO – Having lost five forwards in the last five games, a stunning run of injuries, the reeling Sabres have two options for tonight’s game against the Minnesota Wild.

The Sabres can either dress seven defensemen and only 11 forwards, coach Ralph Krueger said, or they can recall a forward from the Rochester Americans.

They stayed remarkably healthy over the first month of the season, utilizing the same lineup most games. But the injuries have come fast in the last two weeks, leaving a team that has lost seven of its last eight games looking for replacements.

The Sabres, who announced Monday winger Kyle Okposo is out indefinitely after suffering a concussion Saturday, have only two healthy forwards on NHL contracts in the AHL: Jean-Sebastien Dea and Andrew Oglevie.

Tage Thompson, a winger the Sabres summoned to replace Okposo hours before Sunday’s 4-1 loss in Chicago, is out three to five weeks after suffering an upper-body injury late against the Blackhawks.

Thompson, one of the Sabres’ top prospects, left the ice favoring his right arm or shoulder.

“As a coach, you are making decisions on the last five minutes on playing players in a game that’s slipped out of reach,” Krueger said. “You want to get certain ice time in. You throw Tage out one more time.

“It was a strange set of circumstances that caused the injury. But, yeah, you definitely hope that’s the end.”

If the injuries don’t stop, the Sabres could be forced to sign a forward – hello, Jason Pominville? – or make a trade. Krueger said they won’t recall a junior player, meaning center prospect Dylan Cozens, the eighth overall pick in June, isn’t an option.

The injuries started Nov. 8 in Sweden, when Tampa Bay Lightning star Nikita Kucherov hit Sabres winger Vladimir Sobotka, who’s out four to six weeks with a lower-body injury. Sobotka has been wearing a cast on his leg and using crutches.

Right now in Rochester, the Amerks have five forwards sidelined, including three with big league experience – Remi Elie, C.J. Smith and Scott Wilson all have lower-body injuries – on NHL deals.

The Sabres have only 44 players signed to NHL contracts in the organization. Teams are allowed 50.

Okposo, having suffered at least four concussions in his four seasons here, has a concerning history. He was hospitalized in intensive care after sustaining one late in 2016-17.

A freak accident knocked Okposo out of Saturday’s 4-2 win over Ottawa. Okposo, 31, jumped off the bench in the second period and collided with Senators defenseman Ron Hainsey.

Okposo got up, skated to the bench and left the game.

“You’re always concerned,” Krueger said of Okposo. “You just hope for the best result here as quick as possible. It’s all you can really do right now. It’s one of those injuries where you need to have patience. It’s definitely the inactivity that goes with it is always tough psychologically. But we’re there for him. We’re going to fix this together.”

The Sabres’ rash of forward injuries comes after they utilized the same lineup up front for nearly a month.

In fact, they did not even use someone from Rochester until winger Curtis Lazar played Thursday.

“That’s just the way the cookie crumbles sometimes,” Sabres center Evan Rodrigues said of the injuries. “Some teams go a whole season without having any major injuries. Sometimes you kind of get what’s going on here. Guys seem to be going down game by game.”

Krueger said the Sabres’ situation early on was “more than relatively stable.”

“It was a really long stretch with the same forward lines, and there was some good synergy there,” he said. “The processes seemed to be quite automatic, especially the way we want to be connected on the ice. Losing a forward a game now for five games in a row has been quite disruptive.”

With so many forwards sidelined, Sabres defenseman Zach Bogosian practiced up front Monday.

Bogosian, out since undergoing hip surgery in April, started practicing Wednesday. The Sabres list him as day-to-day.

“It’s just nice to be back out there, to be honest with you,” he said of skating up front. “I love the game of hockey so much, so as long as I’m out there playing in front of guys, it’s nice.”