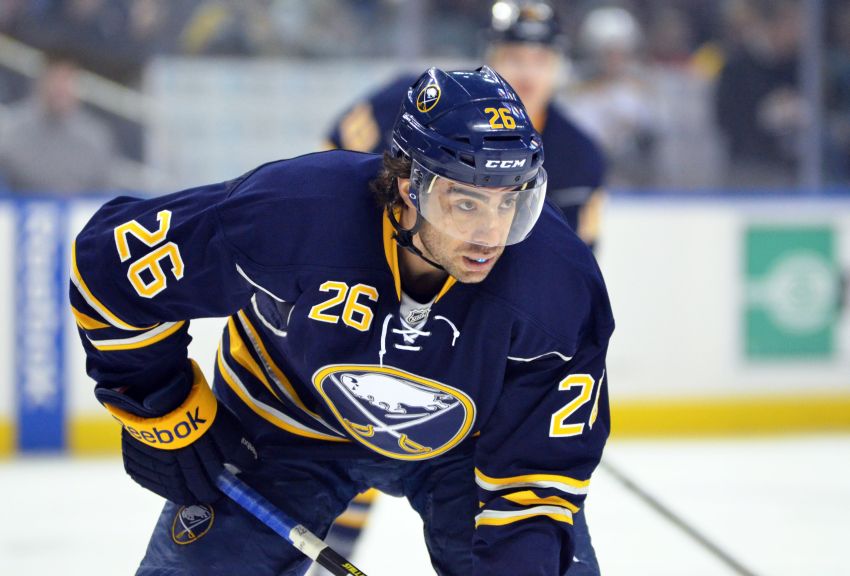 BUFFALO – Tim Murray said he began his first NHL trade deadline day as a general manager with no expectations, unsure which direction the rebuilding Sabres might go.

Murray, who sent franchise goalie Ryan Miller and captain Steve Ott to St. Louis on Friday, called it a “good day.” He’s not done, either.

“This may be the roster we have for five years depending on who’s a coming free agent or whatever,” Murray said inside the First Niagara Center. “But we have to add players. We have to create inner-competition, and this is the start of it.

“So the start of building, for me, was Friday, and today was a continuation of it. There’s still a lot of building to do.”

That building, Murray said, will continue at the NHL Entry Draft in June. The Sabres still have a bevy of picks – they dealt two second-rounders early in the day before acquiring two more later – and youngsters, assets Murray said are “a ton of ammunition heading into the draft.”

“There will be young players available that aren’t available at trade deadline day,” he said.

Perhaps just as notable as the deals, the Sabres kept some of their top talent, most notably Christian Ehrhoff, Tyler Myers and Drew Stafford. Naturally, there was “a lot of kicking tires,” Murray said.

“They check to see if you’re up to the task and can get one of your best young players for a bargain,” he said. “I don’t blame them for that. That’s good strategy.”

Here are the deals:

Moulson, a three-time 30-goal winger, was one of the best rentals available. The Sabres acquired him Oct. 27. The gritty McCormick is a versatile fourth-liner.

“He’s a hard-playing, hard-skating guy that again fits the new culture,” Murray said about Mitchell, who has a year left on his contract.

– In a somewhat surprising trade, the Sabres sent McNabb, a 23-year-old defense prospect many believed would be an NHL regular soon, and second-round picks in 2014 and 2015 to the Los Angeles Kings for 18-year-old NCAA winger Hudson Fasching and 23-year-old AHL winger Nicolas Deslauriers.

“We need young forwards,” Murray said.” The two forwards we got, we really like their future. … So it wasn’t a position thing, it was the two players. I didn’t come into today expecting to trade draft picks.”

Murray said Fasching performed like a “dominant power forward” at the world junior championship after a down season.

“He’s a guy that I’ve liked for a long time,” he said. “We believe that he can be that type of player down the road. There is some chance in that trade. We’re trading for two futures.”

He added: “He has a chance to be a top-six forward if he develops properly.”

Deslauriers, the 84th overall pick in 2009, has 18 goals and 39 points in 60 games with AHL Manchester this season. He’s 6-feet and 230 pounds and used to play defense. He’ll report to Rochester.

“If you look at his stats, he’s taken that position quite nicely as far as goals, shots on goal, the way he plays and he can still run the point on your power play,” Murray said.

McNabb, meanwhile, had one goal, eight points in 37 games over parts of two seasons with the Sabres. He played 12 games earlier this year. The Sabres selected him 66th overall in 2009.

“We had a lot of guys in the room that really liked Brayden McNabb,” Murray said. “I think he’s an NHL player.”

– As expected, the Sabres flipped Jaroslav Halak, the goalie they acquired from the Blues, sending him and a third-round pick in 2015 to the Washington Capitals for goalie Michal Neuvirth and defenseman Rostislav Klesla.

“I would’ve considered keeping him if there were no trade offers that I liked,” he said. “That was my course with all the pending UFAs.”

The 25-year-old Neuvirth fell out of favor with the Capitals this season, becoming their No. 3 netminder at times.

“I like the goalie that I got back, plain and simple,” Murray said. “He’s a young goalie that I’ve seen for a long time, played in the OHL. For whatever reason, he’s a backup there. He’s just not as important as he wants to be.

“I think when he gets to feel some love again or whatever you want to call it and gets an opportunity, that he can get his game back. In saying ‘get his game back,’ his stats are pretty good now.”

The 31-year-old Klesla, the fourth overall pick in 2000, will report to Rochester. Washington acquired him Tuesday. He had never played in the AHL before this season.

The Sabres play the Lightning tonight in Tampa Bay.