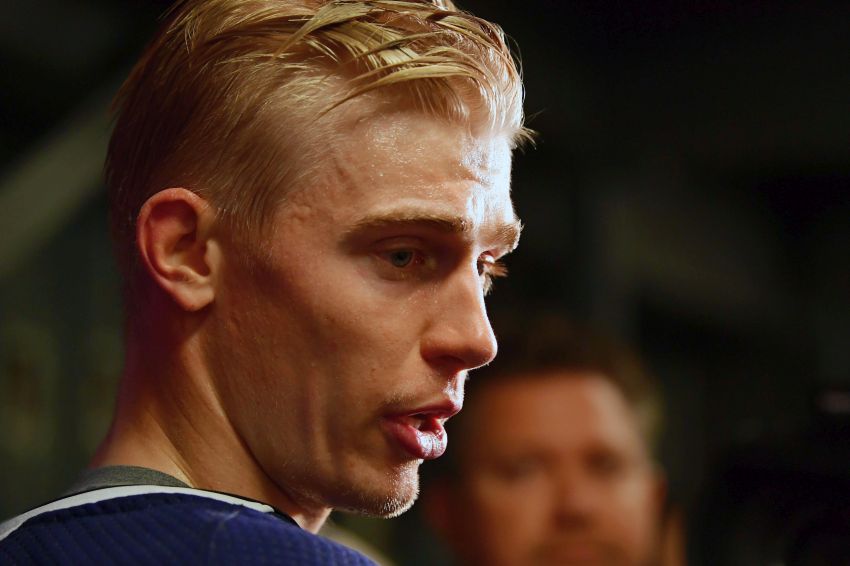 BUFFALO – Rasmus Ristolainen paused for a few seconds to collect his thoughts. All summer long, it felt like the Sabres could trade the defenseman at any moment.

But there was Ristolainen on Thursday, sporting his blue No. 55 Sabres hoody and a backwards hat fielding questions from the media inside KeyBank Center.

Is the Finn surprised he’s still in Buffalo?

“I’ve been here six years and I’ve seen this business,” Ristolainen said after veterans reported to training camp. “You never know where you will be next week or next month. When I’m back home, it’s easy to go away from hockey and not worry about things you can’t control.

Ristolainen’s frustration with the constant losing he has endured – the Sabres have never sniffed the postseason in his career and finished dead last three times – has been well documented.

By the end of last season, it seemed like Ristolainen, 24, had suffered enough and wanted a change of scenery.

Ristolainen is rumored to have asked Sabres general manager Jason Botterill to be traded.

“The conversations me and Jason have had is going to stay between us,” Ristolainen replied when asked if he had requested a trade.

That, of course, isn’t exactly a denial.

Last month, Ristolainen told Finnish television network MTV Sports, “I cannot say anything other than the fact that on the 12th of September, (I will be at) one of the NHL team’s training camp,” according to a Google translation of the interview.

“I was just explaining, personally, how I felt,” Ristolainen said Thursday. “When you have rough years like I’ve had here the last six years, you don’t win much, that’s what you want.

“Things get rough and you get (ticked). I was just telling that year wasn’t easy for me. I wasn’t blaming anyone else than myself. I’m hard on myself.”

Ristolainen, who has three seasons left on his six-year, $32.5 million contract, said he can’t worry about getting dealt in the future.

“I’m here now and I guess I will be here tomorrow,” he said.

Ristolainen spoke positively about the upcoming season. He seems to know he might be staying put in Buffalo, a place he has referred to as “home.”

He said he’s excited about the hire of coach Ralph Krueger – “I like his plans for us and for the future,” he said – and the Sabres’ offseason moves.

Given the Sabres’ sorry finish – they lost 15 of 16 games in March – it can be easy to forget they compiled a 10-game winning streak and ranked first in the NHL less than 10 months ago.

Ristolainen said he doesn’t “think the problem has been the coaching” throughout his career. Incredibly, Krueger is the Sabres’ fifth coach since he began his career in 2013.

“We as players need to do better, be on the same page and buy into what the coach brings,” Ristolainen said.

Ristolainen understands can’t have another season like his 2018-19 campaign. Sure, he skated a team-high 24 minutes, 38 seconds an outing and produced 43 points.

But his wretched minus-41 rating ranked dead last in the NHL.

“We all know I have to work on my defensive-zone game. It’s not my strength, so let’s make it my strength.”