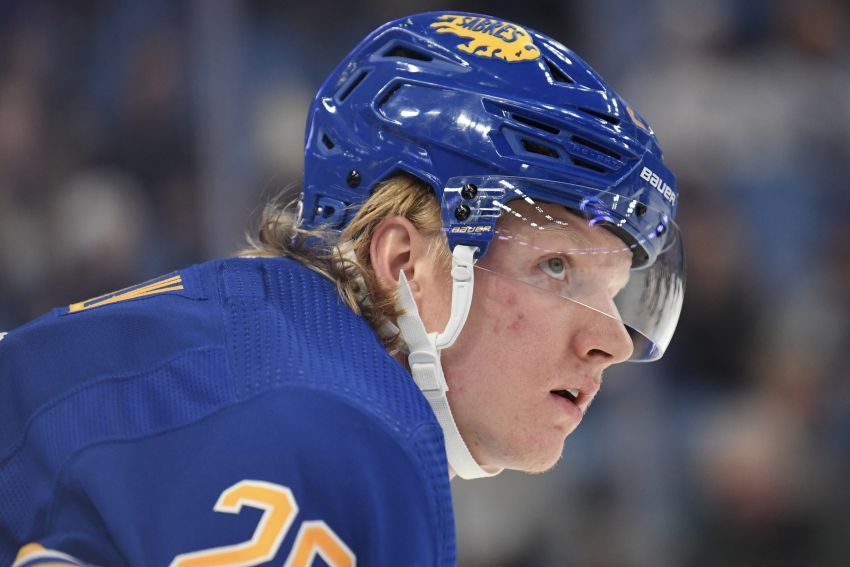 BUFFALO – In his fourth season, Rasmus Dahlin has emerged as the Sabres’ most valuable player and one of the NHL’s premier young defensemen.

At 21, Dahlin, who will likely return from upper-body injury tonight, is a budding star.

Dahlin’s absence in Sunday’s 7-3 loss to the Columbus Blue Jackets was glaring. With the Swede sidelined for the second game of a back-to-back, the Sabres looked downright awful at times.

“When you lose your top players at any position, goaltending, your top forward, or your top defenseman … it’s impactful and it was the other night for us,” Granato said. “We lose a guy who plays 25 minutes or more in a back-to-back when guys are making tired decisions. And with him he’s so much more efficient and he doesn’t get as tired as the rest of the guys because it’s not as taxing for him.

Dahlin, the Sabres’ only NHL All-Star, felt so good during his rehab skate Tuesday morning he later joined his teammates for practice. It appears he will play tonight in Montreal, where the Sabres continue their five-game road trip against the Canadiens.

“They’re worried about strength in the area of the injury and potential vulnerability due to any of lack of strength,” Granato said. “So testing that out today, it looked like he felt and had his strength and, obviously, he wasn’t wincing, so it looked like there was no more pain or less pain in that area, the area of aggravation.”

Dahlin said: “I was not sure that I was going to feel a hundred but I did.”

He doesn’t know when the injury occurred in Saturday afternoon’s 5-3 loss to the Colorado Avalanche. Late in the game, Jack Johnson knocked him down as they chased a loose puck behind the net.

“It’s a little bit of everything,” Dahlin said of his injury. “I didn’t feel it right away, it slowly came after the game. I’m not sure exactly what situation, but it was a physical game and a lot of stuff happened out there.”

Seconds after Johnson hit him, the Avalanche went down the ice and scored the go-ahead goal with Dahlin still behind Colorado’s net. Dahlin, who stayed in the game, acknowledged he was “pretty angry” after the play.

“But you just got to focus on the next shift,” he said.

Granato said Sabres winger Victor Olofsson missed Tuesday’s practice because of a non-COVID illness and won’t play tonight. Olofsson did not accompany the Sabres to Montreal.

With Olofsson out, the Sabres recalled forward Brandon Biro, 23, from the Rochester Americans. Biro has never played in the NHL.

Krebs has been playing left wing so he can skate on a scoring line. But Cozens and Mittelstadt, who just returned from an upper-body injury, have played center all season. They took turns in the middle.

“We know Mittsy’s working his way back into being Mittsy,” Granato said of Mittelstadt, who has played just nine times this season. “It’s going to take him games to do that … so I just felt give him some speed on the wing at least in practice with Cozens, the way he can skate, and the way Krebs processes the game is much like Mittsy does. So whether we do that in the game tomorrow or not, I don’t know yet because, obviously, we could put Biro in.”

When Sabres defenseman Will Butcher collided with one of the Arizona Coyotes on Jan. 30, he thought he dislocated his kneecap.

“Just heard a loud pop and then my knee was stiff, like I couldn’t move it,” Butcher said Tuesday after he returned to practice. “So it was just kind of scary there for a second. Got the best news coming off that it just seemed to be MCL kind of thing.”

Butcher, 27, was expected to be sidelined four to six weeks. While he’s unsure when he can play again, he accompanied the Sabres on their road trip.

“I just needed to get a practice in today,” Butcher said. “And … I’m kind of in the early stages of things. But I’ve been progressing so well that the next stage for me is to get back to game speed.”

Butcher practiced beside Robert Hagg, who could be a healthy scratch tonight.

The Canadiens, who have a league-low 11 victories, have found a groove under interim coach Martin St. Louis, winning three straight contests. On Monday, they beat the Toronto Maple Leafs 5-2.

Quebec has lifted some COVID-19 restrictions, so the Bell Centre is up to 50 percent capacity. When the Sabres won 5-3 on Feb. 13 in Montreal, only 500 fans could attend.

“They looked (like) a completely different team last night,” Granato said. “They were up 5-0 on Toronto. They play with lots of adrenaline, there were people in the building finally. We went in there a week ago and … I don’t care how loud you turn the speakers up, the building was dead with no fans. And last night you could see the jump in their players with the energy in the building.