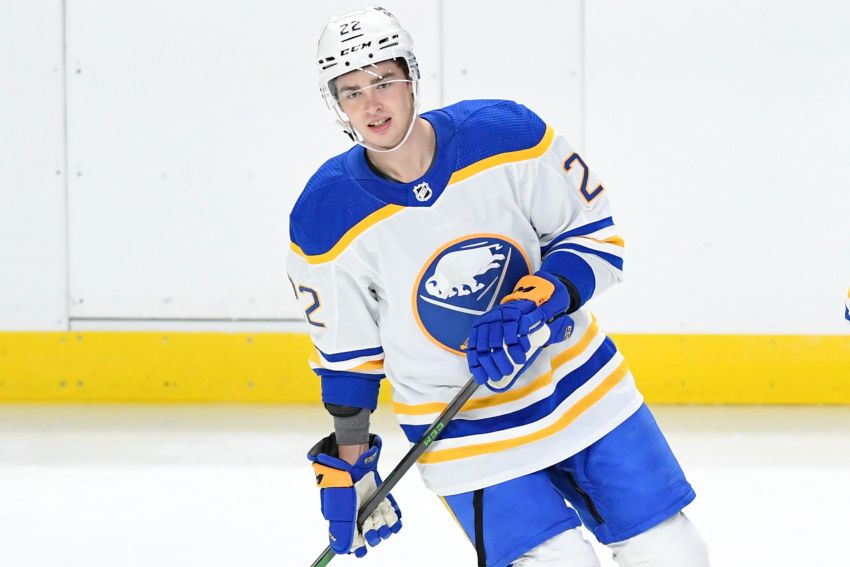 Dahlin, who slickly moved in from the point to score, created Quinn’s goal by deftly feeding him a between-the-legs backhand pass.

Early in the second period, center Dylan Cozens put the Sabres up two goals, zooming through the slot before lifting a nifty backhander over goalie Braden Holtby. Quinn registered his first assist on Cozens goal.

Dahlin, who turns 22 on April 13, is the oldest of the Sabres’ first three goal scorers in Thursday’s 5-4 loss to the Dallas Stars.

The Sabres possess a wealth of elite young talent. Winger Alex Tuch, 25, scored their other goal, his eighth point in eight games this season. If their group keeps developing, they could morph into a playoff team in a year or two.

But right now, the Sabres are still a raw, rebuilding team that ranks among the NHL’s bottom-feeders.

In Thursday’s loss, they blew three leads and lost for the league-high eighth time this season when leading after two periods. They allowed four power-play goals and 47 shots on net before a crowd of 7,808 fans inside KeyBank Center.

“When I looked at the game, it’s a glimpse of a little bit of where we’re at, maybe the opportunity we have in front of us, too, when you see some the goals we did score with some young guys and really skilled guys,” Sabres coach Don Granato said. “Some really nice goals on our side, but when I talk about the end result of winning, in this case, not winning, you can see the challenge ahead for us a younger group to win more of those battles.

“Some of it’s physical, some of it’s technical, but this was a team that went to a Stanley Cup final (in 2020) because they’re big and strong.”

He added: “The net-front battles and wall battles, they outbattled us. There’s no question that was the biggest difference in the game.”

Early in the contest, it appeared the Sabres might cruise to a victory.

Dahlin scored at the 2:47 mark, beating a defender one-on-one at the top of the left circle before moving in and beating Holtby.

“They had a man-on-man defense so I kind of took advantage of that,” Dahlin said. “They gave me space. Usually I shoot that from the blue line but I found a way to take the puck to the net.”

Then Quinn, who was recalled Thursday morning, scored a power-play goal 6:37 into his second NHL game.

“Something you kind of dream about,” Quinn said. “So it was pretty special to see it go in and it was exciting to celebrate with my teammates there.”

Quinn said Dahlin’s pass to him “was crazy.”

“So skilled,” he said. “I kind of wasn’t expecting him to do that. He came to me, he gave me basically one-on-one with the goalie.”

When Quinn, 20, gets that kind of opportunity, he usually converts. The winger has scored 18 goals in only 24 games with the Rochester Americans, a gaudy number tied for AHL’s highest total entering Thursday’s contests.

“What a goal, it was beautiful goal,” Granato said. “It was a power play, but if he has that much time, that’s what he can do. He knows where to put it. That was outstanding.”

Despite seizing the early momentum, the Sabres kept frittering away leads.

Tyler Seguin tied it at 3 11:40 into the second period before Tuch put the Sabres back up minutes later. Then Seguin and Jason Robertson scored third-period power-play goals.

“I feel like they came out pretty slow,” said Dahlin, who had three points and played a game-high 28 minutes, 8 seconds. “We took advantage of it. We scored a couple goals there. But then the second and the third period, they did the right things over and over again and they rolled over us.

“Our young guys did a great job today, but we just have to find a way to win these type of games against this type of veteran team. It (stinks), for sure.”

Sabres defenseman Will Butcher left the game with an undisclosed injury in the first period and did not return. Granato did not have an update.

2 thoughts on “Rasmus Dahlin, Jack Quinn and others give glimpse of Sabres’ future in loss”