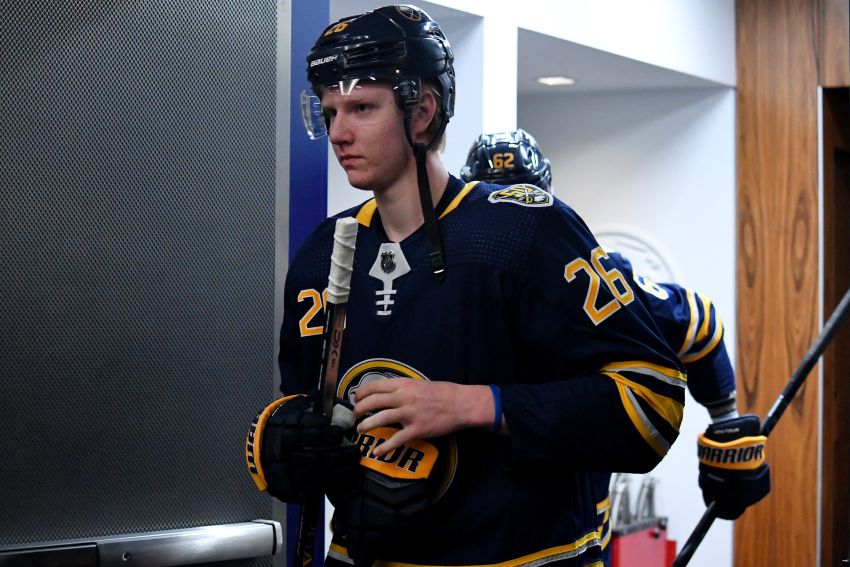 Rasmus Dahlin was excited to have a chance in the shootout. ©2020, Micheline Veluvolu

BUFFALO – Rasmus Dahlin couldn’t help himself. The Sabres defenseman waited 141 games for his first NHL shootout opportunity. After beating goalie Braden Holtby in the fourth round Monday, the normally mild-mannered Swede wanted to celebrate his goal.

So Dahlin yelled and moved his arms as he skated to the bench.

“Did some stupid celly there,” Dahlin said this morning inside KeyBank Center. “But I was all happy. I was very happy, actually, so it was good.”

Dahlin, 19, said he borrowed his shootout move – he wound up for a big slapper in the slot before slowing down and shooting – from a former junior teammate and ex-Sabre Linus Omark.

Omark, who played 13 games with the Sabres in 2013-14, possesses perhaps the flashiest array of shootout moves of anyone in the world.

Dahlin said he unleashed the puck from the slot because “it was bad ice.”

“When (coach Ralph Krueger) said my name, I got really happy,” he said. “I just went out there and tried something funny and it worked out, so it was good.”

Considering Dahlin scored, he has likely earned another shootout someday. He said he doesn’t have any tricks up his sleeve.

“I don’t want to put pressure on myself,” he said. “If I get one more chance, I will try something new.”

On Monday, the NHL, NBA, Major League Baseball and Major League Soccer announced their locker rooms would only be open to players and essential employees of teams and facilities until further notice because of the coronavirus.

So following Monday’s game, three Sabres players took turns speaking to the press at a table in the media room. Only Krueger usually speaks in that room.

After the Sabres held an off-ice workout this morning, three players took turns again at a podium in the media room.

One-on-one interviews were conducted in another room with the player standing behind a belt stanchion so he kept a “safe” distance from the interviewer.