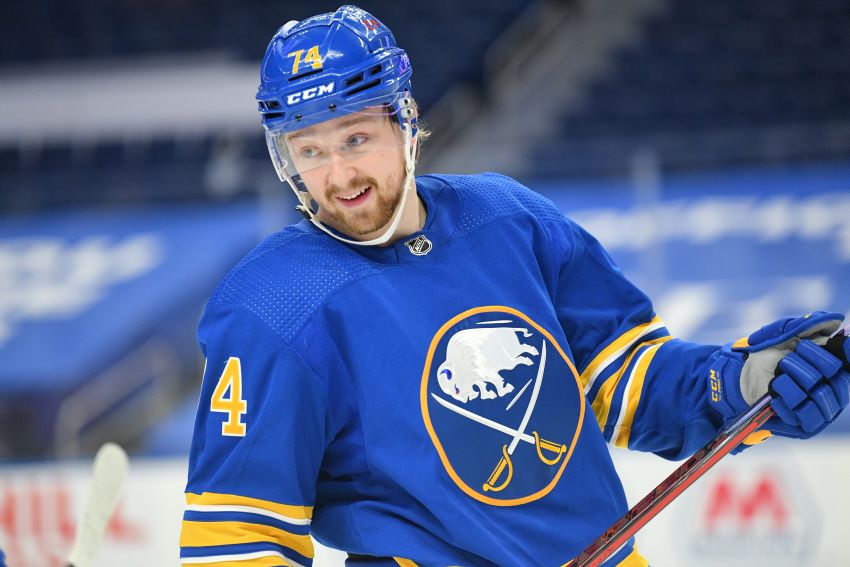 Rasmus Asplund has scored four goals in only 10 games this season. ©2021, Micheline Veluvolu

BUFFALO – Sabres winger Rasmus Asplund said his first taste of the NHL last season exhausted him mentally. The Swede couldn’t let go of what transpired during games. He even had trouble falling asleep.

“I felt last year that I started off my first five games really good but then I got really tired mentally,” Asplund said on a Zoom call following Wednesday’s optional practice.

So in the offseason, Asplund, 23, began developing what he called his “mental game.” Now after he plays, for example, he tries to slow down his mind by laying down and doing mental exercises for 30 minutes to “reset.”

“Just take my time, just stop and just relax for a little bit and let the mind rest and just go through what I’ve been doing good and great,” he said. “It started with the workouts this summer.”

Asplund said he can “just put that day in the past.”

“I’m looking forward to the next day, which I felt last year I didn’t do,” said Asplund, a second-round-pick in 2016, 33rd overall. “I was still (thinking about) yesterday and thinking about the game yesterday. Just my mind never really got a rest. So when you get to play like 25, 30 games like I did last year, your mental game is not there. You feel tired, you’re not sleeping well.”

“It was instant chemistry,” Granato said after the Sabres prepared for tonight’s game against New Jersey at KeyBank Center.

Asplund converted Mittelstadt’s nifty pass 9:56 into Tuesday’s game, his fourth goal in only 10 games. That goal total is double what winger Taylor Hall, who had been playing on that line, produced in 37 games. The Sabres held Hall out of Tuesday’s contest as a precaution as they try to trade him.

Not surprisingly, Granato said he plans to keep the line intact tonight.

“There’s no need to reinvent the wheel,” he said. “If those guys have chemistry and it’s going and they feel good, there’s no reason to change that.”

The line generated Corsi For on Tuesday – the percentage of shot attempts by the team while a trio is on the ice five-on-five – of 60% during 9 minutes, 51 seconds of ice time, according to NaturalStatTrick.com.

“We’re all really good friends,” Mittelstadt said of his linemates. “It’s nice to go out there and have some familiar faces. I think what we did well (Tuesday) is we’re trying to make plays and if they don’t work, just make sure we got a guy back. If I mess up, Aspy and Tommer are backchecking hard. If one of them do, I’m going back hard.”

Asplund said: “We know each other pretty well, know what type of hockey we want to play together.”

Granato said Asplund used his 29-game run with the Sabres last season as “almost an apprenticeship.” He believes Asplund figured out his strengths and weaknesses and arrived this season ready to grab his opportunities.

Of course, the 5-foot-11, 189-pound Asplund had to wait to play regularly. He has spent most of the season on the taxi squad. He also played three games with the Rochester Americans.

After the Sabres suffered a few injuries up front and traded center Eric Staal, a spot finally materialized in late March.

“He was finding and searching his way around the NHL a year ago and now he’s targeting what to do and what he can do within a shift and a game,” Granato said. “And that’s where you see the results now. He’s very results-oriented. He knows what’s wanted from the coach, from the system he plays and obviously within the game itself.

“He’s ready for that next opportunity. Being ready to seize it is really the biggest difference as he’s built himself up.”