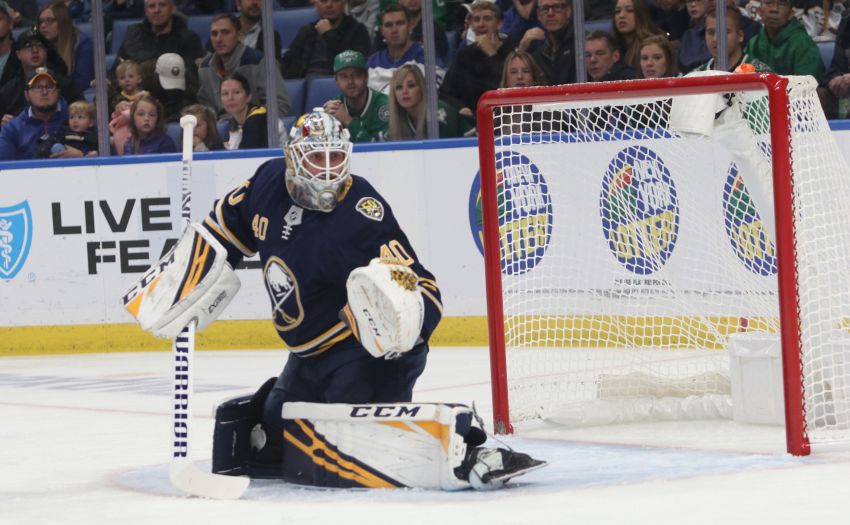 BUFFALO – Few figured coach Ralph Krueger could transform the Sabres so quickly that – gasp – a playoff berth would feel possible this season.

It would take time – maybe months, even a season – before the Sabres showed real progress, right?

Well, six games into Krueger’s tenure, the Sabres are still undefeated in regulation, a sparkling 5-0-1.

Monday afternoon’s 4-0 win over the reeling Dallas Stars was probably their most complete effort of the young season.

The response was huge. Last week, the Sabres blew two straight two-goal, third-period leads before roaring back to win.

On Monday, they put the game out of reach early in the final period, extending a 2-0 advantage by scoring on their first two shots before the crowd of 16,595 inside KeyBank Center.

“I just like the way we managed the whole game today,” Krueger said. “It was definitely our best performance of the season start to finish, and the third period showed a lot of maturity and learning out of the last couple games. Puck management was very mature and (we played) extremely aggressive defensively at the same time.”

But they look radically different than last winter, when they imploded and missed the postseason for the eighth straight season.

Through six games, the Sabres have scored 24 goals and limited opponents to just 13. They look more cohesive and rigid.

The Sabres have consistently limited high-danger scoring chances, helping keep the chaos around goalies Carter Hutton and Linus Ullmark to a minimum.

Hutton looked sharp Monday, making 25 saves for his first shutout since Feb. 3, 2018 against, ironically, the Sabres as a member of the St. Louis Blues in Buffalo.

The 12th shutout of his NHL career might’ve been one of his easiest.

Krueger traces the Sabres’ commitment to defense to Sept. 13, the first day of training camp.

“This group has bought in right from Day One,” he said.

He added: “Feather in your cap, a shutout, but, realistically, that was a heck of a team effort tonight.”

Sabres winger Victor Olofsson said: “We didn’t stop, we didn’t fall back at all and just played a simple game. It was really hard for Dallas to create anything.”

Olofsson’s fifth power-play goal this season opened the scoring 6:27 into the second period and set an NHL record.

Like so many of his other goals, the Swedish winger unleashed his wicked shot from the circle, beating goalie Ben Bishop, who has historically owned the Sabres.

Incredibly, Olofsson has scored his first NHL seven goals on the man advantage. Twelve games into his career, the rookie still hasn’t scored an even-strength goal.

“It’s obviously fun to have some kind of record,” Olofsson said. “I want to get that five-on-five goal. It felt a lot better today, my overall (game).”

No one has scored more power-play goals than Olofsson since he made his NHL debut March 28.

Olofsson’s ability to play on the top line beside Reinhart and center Jack Eichel allowed Krueger to shift Skinner, a 40-goal scorer, to the second trio before the season.

Up and down the lineup, the Sabres’ new depth has generated more competition.

“What’s happening here is everybody pushing everybody and cheering for each other,” Krueger said.

In goal, it’s still unclear who’s the No. 1. Hutton, based on age and his performance last season, is probably considered the starter. He has played four of the six games.

“Pretty well everybody in the league now that has sustainable performances is able to bring both goalies, and we feel extremely comfortable with both,” Krueger said. “Hutts played a great game today.”