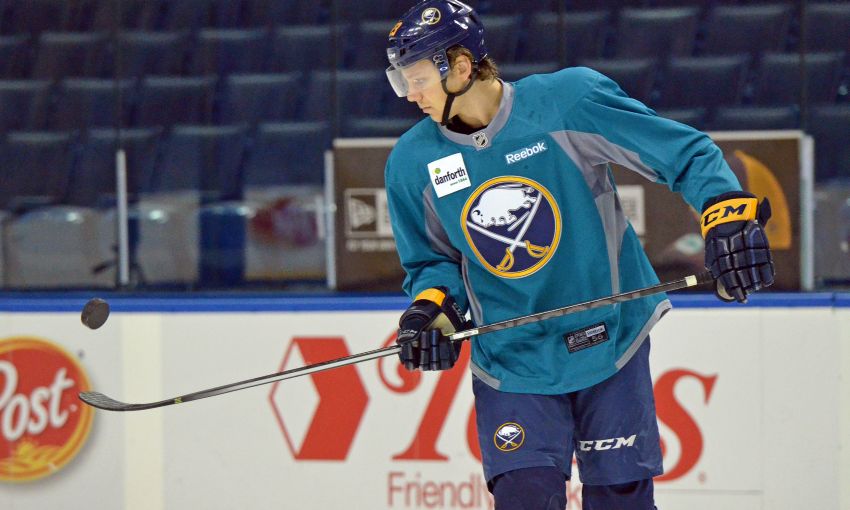 BUFFALO – A goal or even a little more assertiveness tonight would greatly boost top prospect Sam Reinhart’s chances of making the Sabres right out of junior hockey.

Time could be running out for the 18-year-old, the No. 2 pick in June. Only two exhibition games are left.

Through three appearances, Reinhart has zero points, just two shots on goal and a minus-1 rating while averaging 16 minutes, 16 seconds of ice time. Incredibly, he’s only attempted three shots.

“Obviously, it’s getting a little frustrating,” Reinhart said Tuesday inside the First Niagara Center after the Sabres prepared for tonight’s preseason tilt against the Washington Capitals.

But Reinhart must start scoring to stay in the NHL.

“Sam’s like any other player, except he has a tag of being that first-round pick,” Nolan said. “As everybody else, you got to do it. You can’t just hope you’re going to do it, you got to do it, and that’s not putting pressure on anybody. We say the same thing to all the guys coming in.”

Nolan expected Reinhart would need time to acclimate. After all, just months removed from junior, he’s competing against some men almost double his age.

“You give him a little bit of time to adjust,” Nolan said. “Now he’s got to start doing things that he’s really good at, and that’s thinking the game, dishing the puck, moving around, being a little bit more involved. So as the games get going, you want him to get going with the game.”

Reinhart said he can’t worry about time. The Sabres close the preseason Friday in Carolina. Nolan plans to dress Reinhart both games.

“I’m focusing on getting better every day,” said Reinhart, who often stays on the ice long after practice has ended. “I feel I have. It’s going to be a process. I’m certainly going to want to produce sooner rather than later.”

In a new league surrounded by talented linemates – Reinhart has skated beside Brian Gionta, Cody Hodgson and Chris Stewart – his first instinct has been to dish the puck. Much of the creativity he showcased in junior has vanished.

“At the end of the day, you have to realize you’re playing with smarter and better players,” Reinhart said. “They’re going to create room for you. It’s not like the room’s not there. It’s just that I got to get that confidence.”

Reinhart said “getting used to the pace” has been the biggest NHL adjustment.

“Sooner than later I’m going to have to be ready at the start and adapt,” he said. “I feel comfortable. I feel like I’m preparing to do that. I think that’s a good sign.”

Reinhart thinks he has generated chances.

“I’m just going to stick with it and try to focus on the bigger picture,” he said. “That’s part of my game, and I feel like that’s going to have to come.”

Of course, that bigger picture could include a return to the Western Hockey League, where he dominated two seasons with the Kootenay Ice.

“It would be disappointing,” Reinhart said about going back. “But I’m aware. If that does happen, I’ll do everything I can to take it as a positive and go down and dominate.”

Remember, the Sabres can play Reinhart nine times before his entry-level contract kicks in. They might keep him for a trial. Reinhart’s an extremely intelligent player. He could develop rapidly.

Many had Reinhart penciled in as Buffalo’s third center. Right now, however, that job could belong to 20-year-old Mikhail Grigorenko, training camp’s biggest surprise.

Two years ago, without the benefit of watching him over a full training camp, the Sabres’ old regime forced Grigorenko onto the roster during the lockout-shortened campaign, burning a year of his contract.

Grigorenko, the No. 12 pick in 2012, wasn’t ready then or last season, when the Sabres gave him another roster spot before Nolan took over. Now, he finally looks like an NHL player.

It’s highly unlikely Nolan, who dislikes playing teenagers, and general manager Tim Murray will keep Reinhart for long if they believe he hasn’t earned a spot.