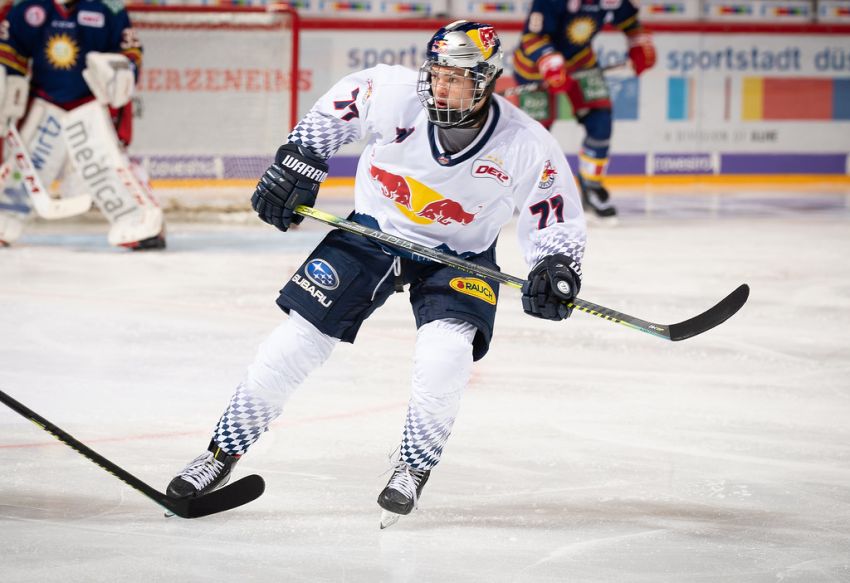 J-J Peterka has been playing against men for more than a year. ©2020, Red Bull Munich

As the NHL Draft progressed Tuesday night, J-J Peterka started getting a little upset. The German forward many had pegged as a first-round selection kept waiting to be picked.

When the first round ended, Peterka, 18, was still available. Meanwhile, rookie general manager Kevyn Adams was trying to move up so he could snatch Peterka, a prospect the Buffalo Sabres had ranked higher.

Adams said he had trouble sleeping because he was trying to figure out a way to get Peterka.

Shortly after the second round started Wednesday, the Sabres traded the 38th and 100th picks to the San Jose Sharks so they could draft Peterka 34th overall.

“I would say it’s a pretty good feeling that they show that trust in you and they really want you,” Peterka said on a Zoom call. “So I’m really, really excited, and I’m really happy for this and the opportunity I get from the Buffalo Sabres.”

Adams said: “We felt very strongly that J-J is … the type of player that we’re looking to put and build in this organization. High compete, high pace, real good athlete, good skater.”

Peterka moved to Salzburg EC in the Austrian League this season. So far, he has scored two goals and three points in two outings.

Competing against men as a teenager has helped Peterka develop an aggressive style.

“I experienced how to get to the net with men,” he said.

Peterka has some connections to the Sabres. He said he skates with winger Dominik Kahun, who joined Buffalo late last season, during the summer. Kahun played for Red Bull before coming to the NHL.

“Practicing with him, he’s a really good guy,” Peterka said. “So I’m really looking forward to that.”

“Playing with him was unbelievable, I would say,” Peterka said. “He is such a great player with such good patience on the puck and makes such good plays.”