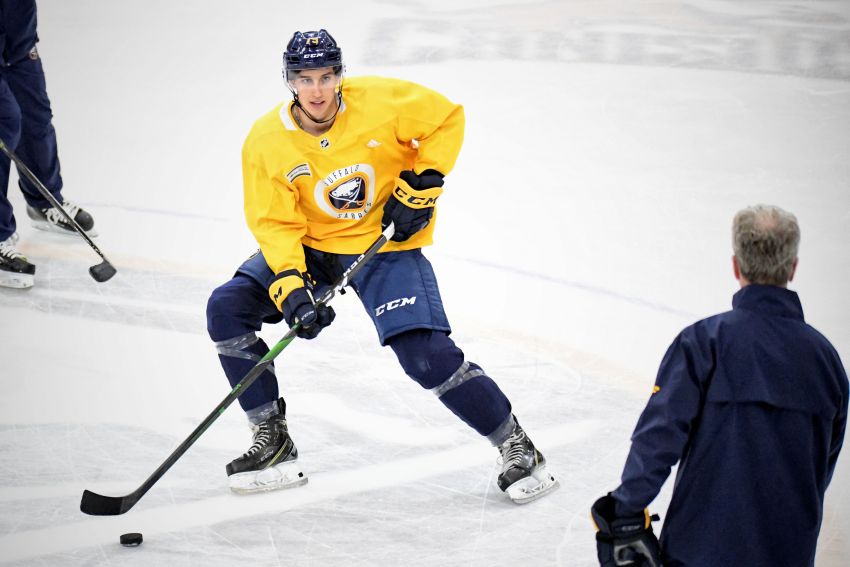 BUFFALO – If Sabres prospect Dylan Cozens returns to the Lethbridge Hurricanes in the coming days, he can show his junior teammates a souvenir from the NHL.

“He took a little bit of a stick today in the lips, so he’s got a first badge of honor here coming up,” Sabres coach Ralph Krueger said this afternoon. “But he took it well, bounced right back into practice and got a little stitched up after practice.”

For now, Cozens, 18, is still with the Sabres. The seventh overall pick survived the first round of training camp reassignments on Sunday.

How long will the center stick? Probably not much longer.

“We’ll be making some hard decisions here (at the) end of the week,” Krueger said. “But for now, this is the group and he’s still in it. …

“We love the way he’s involving himself in the group and looking for his opportunity here. Let’s let him continue to push the group for now.”

Fresh off a strong outing in Friday’s 3-0 preseason loss in Toronto, Cozens played only eight minutes, 32 seconds in Saturday’s 5-3 win against the Maple Leafs.

Cozens didn’t skate on a regular line this morning inside KeyBank Center.

Following the first round of cuts, the Sabres held one session today for the first time in training camp. Twenty-six players practiced.

The Sabres also sent center Jean-Sebastien Dea to the Rochester Americans today. Dea must clear waivers. A lower-body injury kept him from practicing with the Sabres today. He is day-to-day, according to the team.

Winger C.J. Smith and goalie Andrew Hammond cleared waivers today and can report to the AHL.

The Sabres assigned 14 players to the Amerks, whose camp opens today, on Sunday. They also sent Finnish center Arttu Ruotsalainen back to his Ilves, his Liiga team.

Krueger said he doesn’t know the makeup of his roster for the Sabres’ Oct. 3 opener against the Pittsburgh Penguins yet. He said the natural tendency is to keep 14 forwards, eight defenseman and two goalies.

He said everybody left in camp is in the mix for a spot.

“We’re going to continue to keep the internal competition alive with the decisions we make,” he said.

The Sabres also practiced a little lighter today because of illness and injury.

Krueger said he would like Larsson to play Wednesday against the Columbus Blue Jackets.