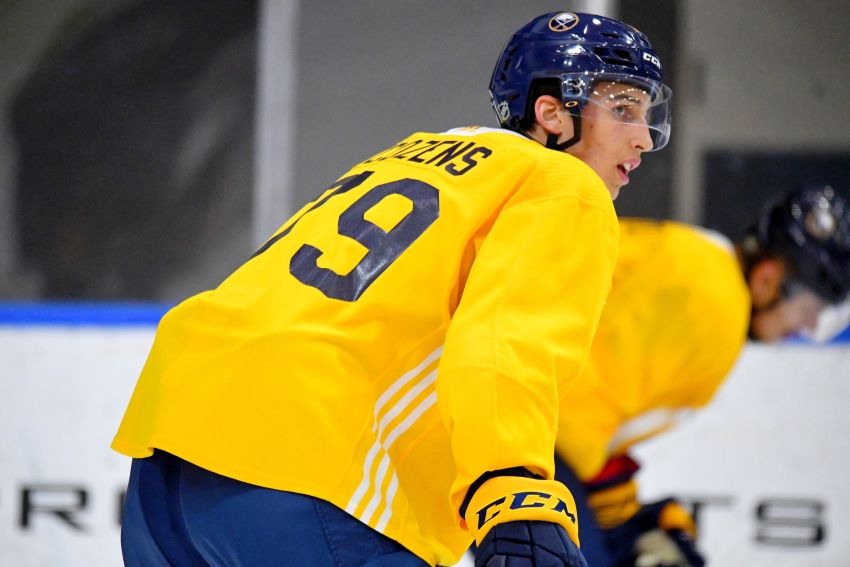 BUFFALO – Before Sabres prospect Dylan Cozens’ impressive effort in Friday’s preseason loss, the coaching staff marked him down as a possibility to play again in tonight’s rematch against the Toronto Maple Leafs.

“There was a good chance he was going to play, but he confirmed it yesterday with what he showed us, and we need one more look here,” Sabres coach Ralph Krueger said this morning inside KeyBank Center.

Cozens, 18, was one of the best Sabres in a forgettable 3-0 loss in Toronto, showcasing poise few teenagers possess to complement his skill.

Early in the game, the center spun off a defender inside his blue line, battled two Leafs beside the Buffalo bench and calmly dished the puck back into his own zone.

To Krueger, the play illustrates some of Cozens’ newfound maturity.

“The last few days we noticed it already that he was opening up a little bit and just playing his game, and tonight we saw a confirmation of that and what his ability is,” Krueger said Friday. “The speed and some of the situations were exciting for all of us.”

Cozens is one of six players from Friday’s game – forwards Rasmus Asplund, Curtis Lazar, Arttu Ruotsalainen, C.J. Smith and defenseman Henri Jokiharju are the others – who will dress again tonight.

“It’s part of the analysis that we’re doing,” Krueger said. “Within the game, we need to make some calls as we step forward with a smaller group next week. We’re just giving these guys one more chance to show their skills.”

The Sabres are expected to send some players to the Rochester Americans on Sunday or Monday. Cozens, of course, can’t play in the AHL yet because of his age.

General manager Jason Botterill said earlier this month he doesn’t expect Cozens to make the Sabres but they would give him every opportunity.

Goalies: Krueger said Carter Hutton could play the whole game tonight. Jonas Johansson will back him up.