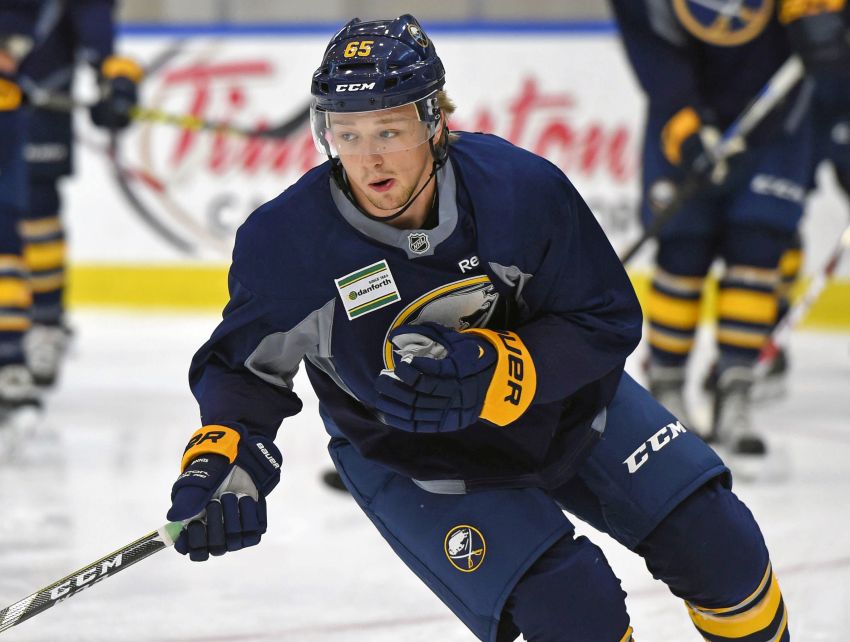 BUFFALO – Almost two years ago, in the midst of a high-scoring junior season, Rasmus Asplund’s success forced the Sabres prospect to “start from scratch,” he said.

Asplund had already scored 25 points in 19 games when Färjestad BK, a team in the Swedish Hockey League, the country’s highest pro circuit, recalled the center.

That meant Asplund, then just 16 years old, would start competing against men.

“It’s a different type of game when you come up,” Asplund said last week following a session of development camp inside HarborCenter. “They’re 30 years old and have kids. It’s hard in the beginning when you’re 16. You always have been a great player.”

“You’re not the best player,” said Asplund, the 33rd overall pick last month. “So, yeah, it’s hard mentally to be 16 years old and start over again.”

Still, moving up never frustrated the 5-foot-10, 176-pound Asplund. He said he enjoyed experiencing “what it takes to be a pro player in Sweden.”

While Asplund’s offensive production remained low in 2015-16 – just four goals and 12 points in 48 contests – he kept developing into a strong two-way presence. The Sabres’ scouts noticed, and they rated Asplund as a first-rounder.

When the second round began June 25 inside the First Niagara Center, Asplund was the only first-round talent left on the Sabres’ draft board. The team quickly moved up to nab him, switching second-round picks with Florida in the Dmitri Kulikov trade.

Understandably, eighth overall pick Alexander Nylander, Asplund’s linemate at the world junior championship, has grabbed most of the attention in Buffalo for three weeks. General manager Tim Murray said last week Nylander, who’s eligible for the AHL, could play with the Sabres next season.

But they could also assign Asplund, 18, to the Rochester Americans in 2016-17. Having already played almost two full seasons of pro hockey, he might be ready for the AHL.

If Asplund acclimates quickly, then perhaps he could be on the Sabres’ radar for a recall. A return to Sweden is also an option.

Wherever Asplund ends up, he will feel pressure.

“They traded up to get me,” he said. “They showed they really believe it me, they want me to be a Sabre. So, yeah, of course, it comes with pressure with that. But I think I just grow as a person and as a hockey player to have that pressure on me.”

Clearly, after 81 pro appearances, Asplund has strong expectations for himself.

“I think I’m really ready mentally to be the guy to produce one point per game again,” he said.

Offense, however, is only one aspect of Asplund’s game. “From the start,” he said, he has been a two-way player. He has a knack for tracking the puck.

“He’s the kind of kid that wants to learn and wants to get better,” Turnbull said. “As a player, great at both ends of the ice.”

Turnbull said the demands of the SHL forced him to work harder than he ever had in his seven-year pro career.

“It’s made me a better player, so I can’t imagine being (Asplund’s) age and being at that high level, learning,” he said.

One day last season, Asplund mentioned the Sabres might be interested in him. Turnbull told him “there’s not too many better places to play.” The two have been staying in touch since the draft.

“I know he’s definitely excited to be in the Sabres organization,” Turnbull said.