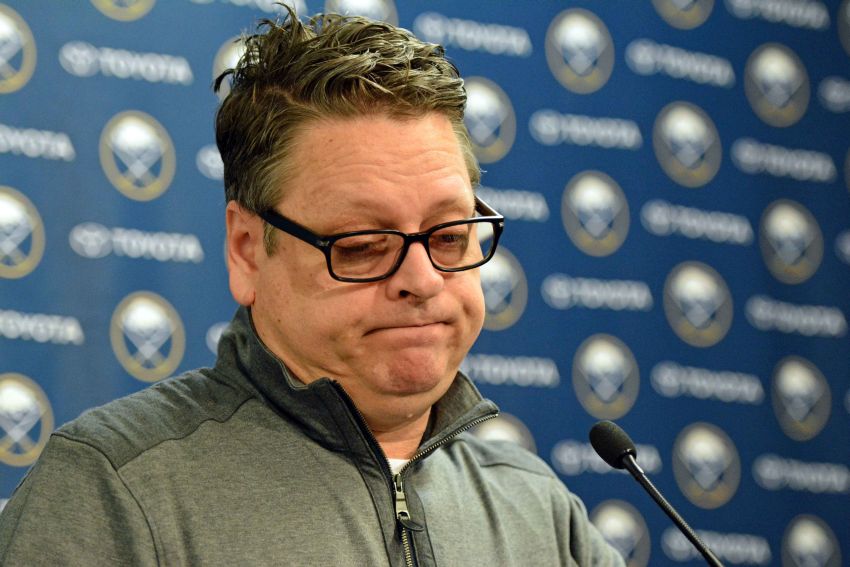 BUFFALO – For the first time since the Sabres replaced Ted Nolan following his initial run almost 18 years ago, the team must search for a new coach.

Yes, it has really been that long.

Out of respect for Nolan, who was fired Sunday following a 30th-place finish, Murray wouldn’t comment much on the search, only speaking vaguely.

“I want to have the biggest pool of big candidates I can get, obviously,” Murray said late Sunday inside the First Niagara Center. “I don’t know how long we’re going to wait; I’m not going to put a timetable on it.

What is Murray looking for in his next coach?

“I haven’t thought of that,” he said. “Certainly, in a perfect world, it would be somebody we have a good relationship and respect each other and communicate with each other, if not every day, on a regular basis. I think that’s what every GM wants.”

Murray, who never meshed with Nolan, has an opportunity to hire his guy, someone who must be “a perfect fit.” He understands he might not get another crack at hiring a coach.

“If … I’m doing this again next year again, then somebody else will get to make that decision when the perfect fit that I’m supposed to be isn’t the perfect fit, and I understand that,” he said.

Murray hired Richardson to coach the Senators’ AHL affiliate when he was Ottawa’s assistant GM.

Richardson, who played 1,417 games as a defenseman during his 21-year NHL career, is regarded as one of hockey’s best coaching prospects. He has said he only wants to return to the NHL as a head coach.

Given their ties, Richardson could be a leading candidate.

Babcock, who has made the playoffs all 10 seasons in Detroit, could become the NHL’s biggest free agent this summer.

Pegula can certainly make the 2008 Stanley Cup winner hockey’s highest-paid coach. And let’s be honest, Pegula and his wife, Kim, might covet another high-profile leader. Their hiring of Rex Ryan to coach the Buffalo Bills has been a major hit.

Would Babcock really want to join a rebuilding team? If he gets a chance to coach mega-prospect Connor McDavid, perhaps he would try it.

Bylsma sat out this season after Pittsburgh fired him a year ago. The 2009 Cup winner shouldn’t be on the sideline much longer.

He coached Sidney Crosby and Evgeni Malkin six seasons, so that could make him attractive to the Sabres, who will have a young superstar in their lineup next season, either McDavid or Jack Eichel.

It’s worth noting the Sabres’ higher-ups seem to be enchanted with anyone related to the Penguins.

MacLean, who was fired by Murray’s uncle, Ottawa GM Bryan Murray, in December, coached the Senators to the playoffs in 2012 and 2013. He also has strong ties to Tim Murray, although the Sabres GM was closer to Richardson.

Considering someone so close Murray fired MacLean, he could be a longshot.

The Sharks made the playoffs in McLellan’s first six seasons before missing out this year. His strong teams never got over the hump, however. The Sharks might clean house soon.