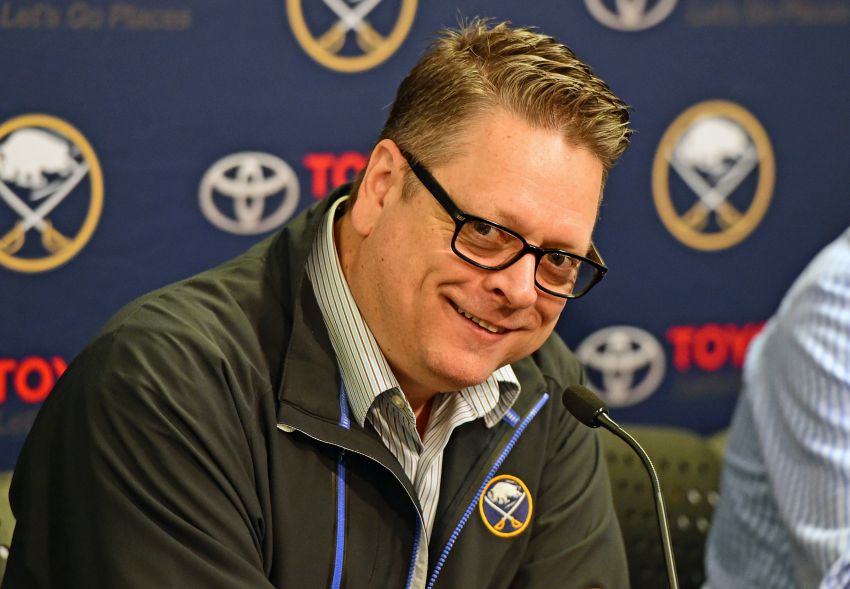 “So that will be our statement to the players, that yes, the goal is to reach the playoffs, and that we actually do expect that we can do that,” Murray said this afternoon during an end-of-season news conference with coach Dan Bylsma inside the First Niagara Center.

The Sabres’ season of growth after consecutive 30th-place finishes clearly pleased Murray and Bylsma. Both laughed and joked about their relationship during their 40-minute chat with the media.

While the Sabres possess a strong stable of young talent, most notably rookie center Jack Eichel, a potential franchise player, they still have several glaring needs to fill if they want to make the postseason for the first time since 2010-11.

Murray’s other need? He joked he’d like a “quarterback defenseman” to drop from heaven.

– Murray said forward Cody McCormick won’t play hockey again because of blood clots. McCormick hasn’t played since the middle of 2014-15. He has one year left on his contract.

“Cody McCormick is not going to jeopardize his life or his family by trying to play again,” he said. “We support him in that. He was around this winter and did some other things when players were rehabbing. So I don’t know if that’s going to be a future thing or not. That’s something that he dabbled at and seemed to like.”

– Murray would like Johnson, an upcoming free agent, to come back.

“I think both (sides) said, money being equal, that he would like to come back also,” he said. “I don’t know how many is going to be equal with the points he puts up and the numbers he puts up. I can’t speak for other teams, but it only takes one desperate hockey club that believes that he’s a starting goalie based on what he did this past season and then the money is not equal.”

– The Sabres haven’t had “much discussion” with defenseman Rasmus Ristolainen’s agent about a new contract. Ristolainen, 21, is a restricted free agent and was the team’s best defenseman most of the season.

– The Sabres placed forward Cal O’Reilly on waivers today and expect him to join the Rochester Americans on Tuesday.