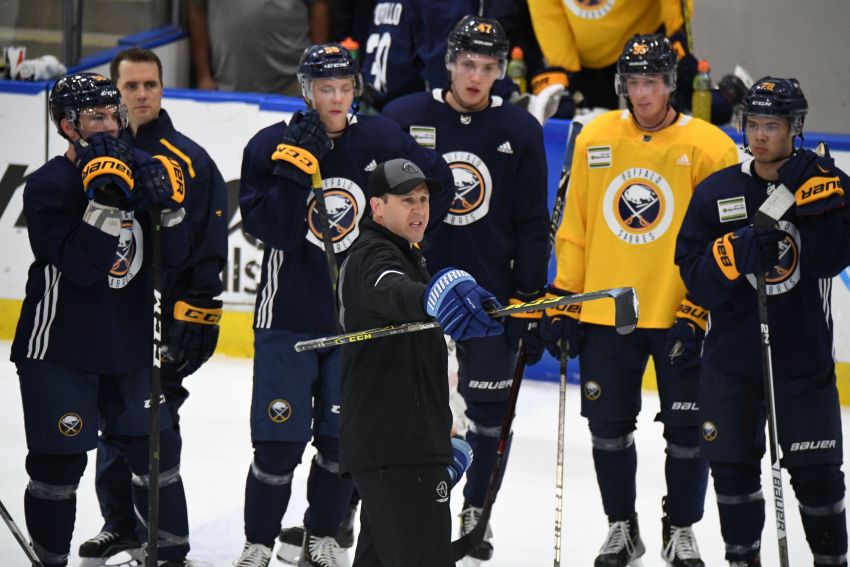 During his playing days, former Buffalo Sabres forward Matt Ellis embraced what he calls the “art of preparation.”

Ellis, the Sabres’ new director of player development, kept a training notebook he still consults. He constantly searched for ways to evolve and maximize his potential.

“I was always a chronic explorer,” Ellis said by phone Wednesday.

In the 2009 offseason, for example, Ellis, then 27, overhauled his shot, changing it so he could create more second-chance scoring opportunities.

“When I draw back on that experience, it was an outside-the-box thought, but it had me buy in and create another level of value,” Ellis said. “Those are lessons that I utilized that I’m hoping I can now translate now in this role.”

Ellis seems like a natural fit for his new role. Despite going undrafted, he carved out a nine-year NHL career, playing 356 games.

His progression as a player – he began his career in the ECHL, a rung below the AHL – offers him a unique perspective into development. He believes his tenure at the Academy of Hockey only enhanced his knowledge.

Following his retirement in 2016, Kevyn Adams, who was running the new Academy at Harborcenter, hired Ellis as a development coach.

“He empowered me at the Academy to allow me to grow, to allow me to develop a path and a process and help me build some of the foundational skills moving forward that have allowed me to get to this point today,” Ellis said of Adams. “So Kevyn has been an incredible mentor.”

In that job, Ellis said he spent 1,000 hours a year on the ice honing talent.

When the Sabres abruptly fired general manager Jason Botterill and gutted their hockey department June 16, they promoted Adams, who had never worked in an NHL front office, to GM.

Given Adams’ respect for Ellis, many expected he would add him to his staff. Under Botterill, assistant GM Steve Greeley, who was also fired, handled player development.

“This was always a goal of mine to be able to work in the best league in the world with some of the best players, and at the same time, be able to have a positive impact,” Ellis said. “And this was definitely something that, I guess, was a dream scenario for me, I was working toward, wanting to get back into the National Hockey League.”

Ellis, who was officially hired Sept. 1, already has a strong feel for the organization’s stable of prospects, which The Hockey News’ 2020 “Future Watch” issue rated the NHL’s ninth-best group. He and other Academy coaches regularly held skill sessions with the Rochester Americans during the season. They also worked with youngsters at development camps.

“The starting point is a little bit further ahead than probably a lot of people think where I had the opportunity to have those experiences,” Ellis said.

In center Dylan Cozens and defenseman Jacob Bryson, the Sabres have two prospects capable of cracking the NHL next season. Ellis said the potential of the entire corps – “We have a well-rounded group,” he said – excites him.

“It kind of turns up the heat on the flame a little bit with the thought that sooner rather than later we’re going to be in the trenches building together,” he said.

Not surprisingly, Ellis said he plans to have a “greater focus” on the on-ice development.

But Ellis hasn’t made any notable decisions yet. He said he wants to evaluate the department before doing anything.

With the COVID-19 pandemic pushing back the start of the 2020-21 season to at least December, Ellis has plenty of time.