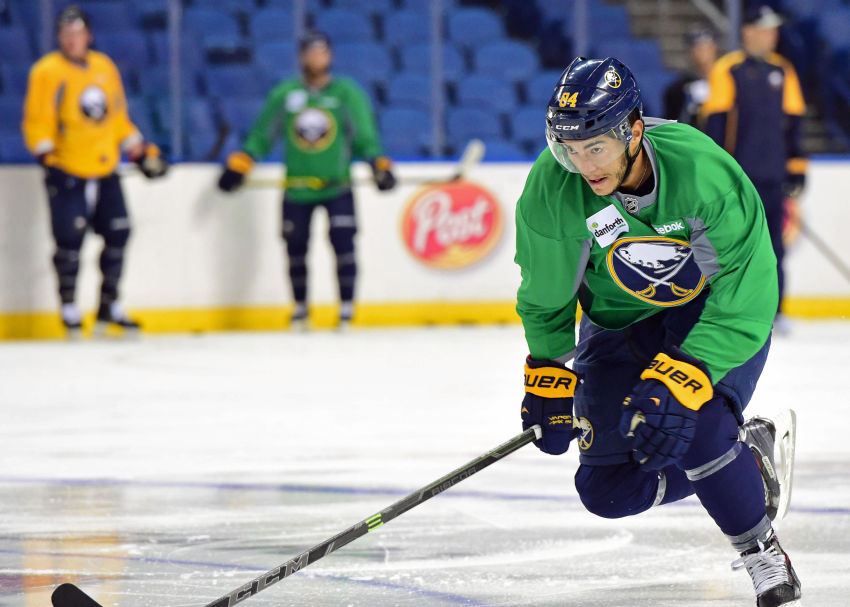 ROCHESTER – One of the oddest situations in the minors is unfolding with the AHL Americans, the Buffalo Sabres’ high-priced affiliate. The club has too many veterans, meaning some notable talent earning six figures has been forced to sit out to comply with league development rules.

The Amerks scratched Jerry D’Amigo and Patrick Kaleta, two forwards with 379 games of NHL experience, Friday. Forward Matt Ellis, an alternate captain less than a year removed from regular NHL duty, sat out for the 11th time this season Sunday. Kaleta was scratched for all three weekend games.

According to AHL rules, teams can only dress six players with 260 or more games of professional experience. The Amerks have eight. Injuries and recalls often quell any veteran overload. That happened two years ago when the Amerks went from having too many to only one.

That, however, hasn’t happened this season, so the Amerks have a less-than-ideal situation.

Amerks coach Randy Cunneyworth recently acknowledged the Sabres have discussed trading one of their older players.

“It hasn’t been easy,” Ellis said Friday inside the Blue Cross War Memorial. “With our vet situation here, the lineup’s not set in stone each and every night. There’s good players sitting.”

Center Phil Varone, the Amerks’ leading scorer last season, has been perhaps the most notable scratch. Varone had 15 goals and 44 points in 2014-15 and also played 28 NHL games. At one point late in the NHL season, he was the Sabres’ No. 1 center.

The 25-year-old parlayed his strong campaign into a one-year, two-way contract worth a guaranteed $200,000 in the AHL, according to generalfanger.com. But Varone, who has a team-high 10 goals, has struggled this season, compiling a minus-19 rating. He recently sat out five contests, including three in a row.

“Obviously, with seven vets, it’s tough because quality players have to sit out,” Varone said. “I wouldn’t say it’s any harder on me than it is on other guys. It’s just something you got to deal with.”

Varone bounced back nicely Friday in the Amerks’ 5-4 win over the Hershey Bears, scoring a goal and tying his career high with four points. Still, he downplayed the performance.

“The first goal bounces off 45 guys, it’s in the back of the net,” Varone said about Cal O’Reilly’s score. “I think it’s more everybody else making a big deal about my season than me. I try to work hard every night. Some days it’s going to happen, some days it’s not. Tonight I had a few bounces go my way.”

He added: “Because it shows up on the score sheet, you think that you’re having a way better game. … Would I say that’s my best game? I think I’ve had good games where I show up with nothing. So it’s just another game.”

Varone was perhaps the best player on the ice. Seconds before his goal, he nearly scored on a nifty spin-o-rama, a move few players can pull off.

At times, however, those slick plays like that have hurt Varone.

“I think as a creative player, that creativity becomes everything,” Cunneyworth said about Varone. “Sometimes simplicity’s the way to play. Creativity becomes risk. You have to play the score. You have to play the time of the game. I think it becomes a little bit too much. We have a couple guys very similar in that regard. We love it at times, but some other times it drives you a little bit crazy.”

So what will the Sabres do with Varone? He’s too old to be considered a prospect. They have already bypassed him for recalls. He got a short look during training camp, something that was no doubt frustrating.

The Sabres recalled defenseman Mark Pysyk from his AHL conditioning assignment on Monday, his 24th birthday.

Pysyk has missed last the 24 games with a broken foot. The former first-round pick played three games with the Amerks, recording an assist. He hasn’t played an NHL game since Nov. 17.

With Pysyk back, the Sabres will have eight defensemen available for tonight’s road contest against the Minnesota Wild, meaning one more will have to be scratched.

Pysyk has one assist and four penalty minutes in 18 games with the Sabres this season.

At 20 years and 65 days, Sabres winger Sam Reinhart became the fifth-youngest player to record a hat trick in franchise history in Sunday afternoon’s 4-2 win in Winnipeg, according to the Elias Sports Bureau. Reinhart’s the first Sabres rookie to have a three-goal game since winger Jason Pominville on Jan. 14, 2006.