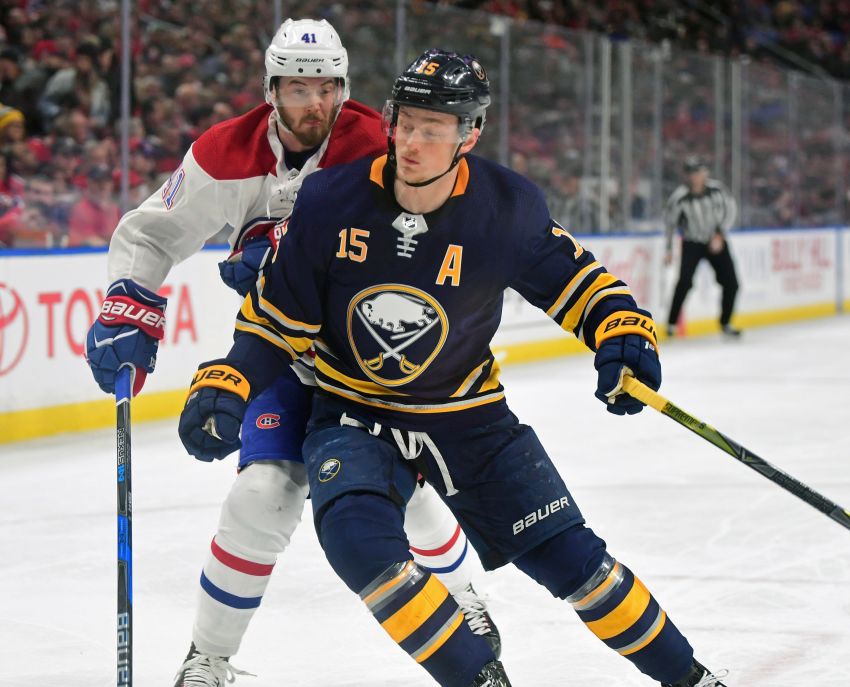 BUFFALO – For the Sabres, the NHL’s worst team, any minor success is usually fleeting. A bad period quickly overshadows the good one.

For the opening 20 minutes Friday, the Sabres responded strongly after two home losses, following their game plan and pumping pucks on net.

Then they started freelancing following a scoreless first period, fell behind and lost 3-0 to the hapless Montreal Canadiens.

Watching it all happen again angered Phil Housley so much the rookie coach called out his top players for the first time all season.

“Even though it’s 1-0 game, there’s still plenty of time to go in the game, and again we’re forcing things that aren’t there and we fed it to them,” Housley said. “It wasn’t anything that Montreal did, it’s what we didn’t do once again.

“I think it’s about time our leadership group stood up now. I challenged them yesterday, definitely wasn’t the response I was looking for.”

The leadership group – the Sabres have four alternate captains and no captain – has done zilch recently. The Sabres have scored once during their three-game losing streak.

Of course, they generated some terrific chances Friday. But center Ryan O’Reilly couldn’t convert three glorious opportunities. Then trailing 1-0 in the third period, they mustered only two shots during a 1:06 two-man advantage against the league’s 30th-ranked penalty killers.

“If you look at the percentages, the teams that score on their five-on-threes usually have good success,” Housley said. “That was a perfect time for us. Lack of execution, lack of sticking with the game plan as far as what we’re looking for five-on-three.

“Some guys like to put things in their own hands and think that’s going to work. Well, it hasn’t.”

Housley was clearing talking about center Jack Eichel, who zoomed into the slot and shot the puck instead of setting up on the two-man advantage.

O’Reilly, meanwhile, missed a prime chance on the five-on-three.

“I had a couple chances to tap pucks in and didn’t,” O’Reilly said of his night. “Those were the sparks we needed, it would’ve helped us take over the game, but it didn’t happen. I got to be better. It’s my fault there were some money chances to score and get us going and didn’t.”

Canadiens goalie Antti Niemi, who’s on his third team this season, recorded his first shutout. None of his 35 saves before the crowd of 18,594 inside KeyBank Center were notable.

“They didn’t do anything special,” he said. “We just missed the chances, didn’t handle the puck the way I wanted to tonight, I think the other guys felt the same. It’s almost embarrassing. We could’ve at least made a game of it.”

The Sabres could’ve won the game if they simply kept playing the style they showcased early. Instead, the Canadiens, who snapped a four-game losing streak, earned just their 10th road victory this season.

“We had the start we wanted,” said Housley, whose team held an early 10-2 shot advantage. “That’s the response we were looking for. We came out and we played a really solid first period and just stuck with the game plan and got pucks to the net. We hit a crossbar, it’s just where we’re at right now as far as scoring.

“But then in the second period, we get away from it. That’s the thing I’ve talked about in the past about handling that success. We have good success, recognize what we get and then we totally get away from it, and then we’re forcing pucks and turning pucks over. We have a little bit of cheat in our game, we’re on the wrong side and that’s what happens.”

Winger Jason Pominville said the Sabres “have to look at ourselves.”

“Sometimes it might feel like we’re working, we think we’re doing the right things, but I don’t think we are,” he said. “That’s why we’re getting those results. If you want to win consistently, you can’t play that way for a long period of time.”

Goalie Linus Ullmark made 21 saves for the Sabres, who play a road tilt tonight against the New York Rangers.