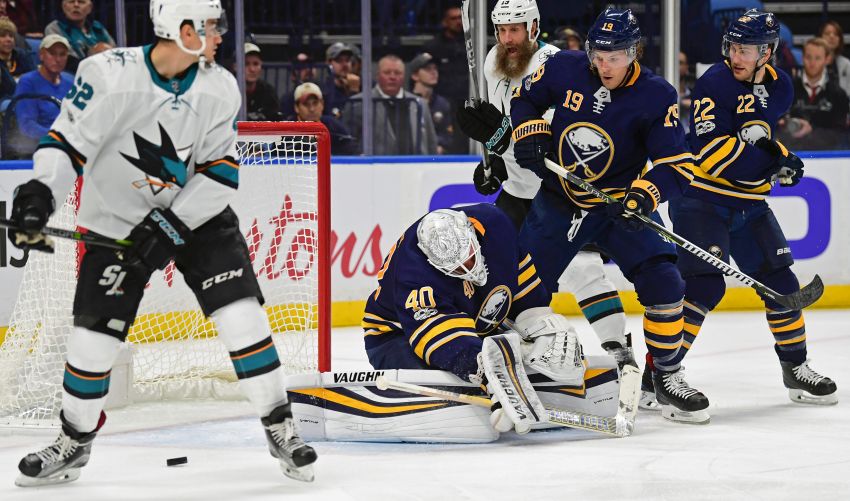 BUFFALO – Phil Housley became a Buffalo Bills fan during his eight years playing here, so he has been keeping tabs on them during his first two months coaching the Sabres.

Right now, the 5-2 Bills are perhaps the NFL’s biggest surprise. To Housley, their success is no fluke. He keeps noticing a trend when the upstart team is discussed on television.

“What is the one thing they’re talking about the Buffalo Bills?” Housley said this afternoon inside KeyBank Center. “It’s their defense. That’s what’s changing things for them, it’s creating turnovers. … We have to take pride in that area.”

Through 12 games, the Sabres have allowed 43 goals, the NHL’s fourth-highest total. Meanwhile, Housley said they’ve produced more scoring chances than their opponent in 80 percent of their contests.

Housley said the Sabres “sort of break” at key times in the game.

“We have to have a mental toughness in that area where we can’t crack,” he said. “That’s part of the culture, too, like building that reassurance, just continue to play the way we’re playing, we don’t have to do anything out of the ordinary.”

Slowly, the Sabres are seeing some results. They blanked Detroit 1-0 last Tuesday and played decently in Saturday afternoon’s 3-2 loss to San Jose.

“Before we spoke about we’ve given up too many odd-man rushes,” Housley said. “Now it’s just that we’re cracking at the wrong time. So if we can clean up those areas, I have total confidence in this group we’re going to have success and we’re going to score enough goals.”

Housley said the Sabres are “close.”

“We have a short body of work, we’re 3-3-1 in our last seven games,” he said. “In saying that, our play without the puck has got to be important.”

The Sabres, who play Thursday in Arizona, had a competitive practice today inside HarborCenter. At one point, defenseman Justin Falk and forward Johan Larsson exchanged some words after some contact around the net.

Housley said the Sabres addressed the work they put into practices early on. Now, they’re trying to up the compete level they showcase during the sessions.

“You see the elite teams around the league … you guarantee there’s a compete level in there,” he said. “There’s a reason why they’re doing well. I think we recognize.”

In other news, Housley said Falk, sidelined all season by a lower-body injury, is available for the Sabres’ upcoming road trip. The Sabres also recalled defenseman Taylor Fedun this morning.

Update: The Rochester Americans have signed forward Colin Blackwell, one of the standouts during Buffalo’s rookie camp, to an AHL contract for the rest of the season, the team announced Tuesday.