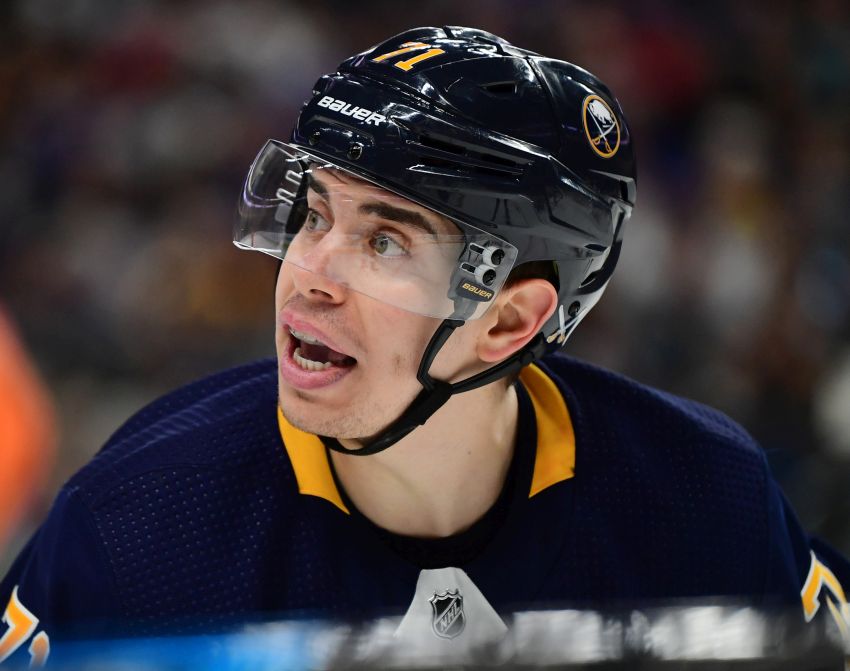 Evan Rodrigues will should sub for Jack Eichel on the top line. ©2019, Hickling Images

Expect Rodrigues to see plenty of action again tonight against the Florida Panthers inside KeyBank Center.

Eichel, who skated only four shifts before leaving Monday’s tilt against the New York Islanders, did not practice Wednesday inside HarborCenter. Housley did not have an update on Eichel because the Sabres’ leading scorer was talking to the team’s medical staff early Wednesday afternoon.

So without Eichel, Rodrigues practiced at center on the No. 1 line between Sam Reinhart and Jeff Skinner, a spot he occupied some of Monday’s game.

“I like the way that line played in the third period,” Housley said. “There was a lot of different combinations, obviously, with Jack being out.”

The speedy Rodrigues offers the Sabres plenty of versatility. His offensive contributions, however, have been limited.

In 34 games, Rodrigues has compiled two goals and 11 points, including just one assist in the last eight contests. He scored his first goal Nov. 21 and has a shooting percentage of just 2.7 percent.

The Sabres don’t exactly possesses a lot of depth at center, so Rodrigues, a healthy scratch six times earlier this season, has a plum gig for the time being.

“Power play, penalty kill, moving up and down the lineup, that’s what he brings to our team,” Housley said of Rodrigues. “The next stage is just his contributions offensively and trying to finish and go to the net hard. He’s doing all the right things right now. Hopefully that translates into production.”

Rodrigues has pumped 23 shots on net since scoring his last goal Dec. 13, so he has been generating some chances.

Even if Eichel misses a single game, his absence is a huge blow to the Sabres, who have lost three straight games (0-2-1) and fallen into the Eastern Conference’s first wild card spot.

Eichel, who has scored 15 goals and 49 points in 40 games, is the Sabres’ offensive catalyst. The captain has been a part of a whopping 43.8 percent of his team’s goals.

“Anytime you lose a guy of that caliber it’s tough,” Sabres winger Kyle Okposo said. “But I believe in the process and this is bigger than one person, what we’ve built here. Jack’s a big part of that and how it’s played. But we have an identity as a team, and just because one guy goes down it doesn’t change our identity.”

Having scored only 10 goals in the last six games, the Sabres’ offense looks anemic. The secondary scoring that boosted them earlier this season has dried up.

What could happen without Eichel?

Housley has said a few times the Sabres have mostly been playing well and will eventually be rewarded if they keep showcasing the same style.

“We’re playing some pretty decent hockey for the most part,” said Okposo, who ended a 21-game goal drought Monday. “I still think we have our lapses, but we definitely are creating offense when we don’t score.

“You can’t just rely on one guy or one line to score. We got to get contributions from everybody.”

When Housley tells his team to stay the course, it’s more significant, than, say, last season, when the Sabres finished dead last.

“Maybe it’s a little different because I think we’ve got a little something to fall back on,” Sabres defenseman Nathan Beaulieu said. “We’ve had the success, the pucks have gone in. Last year, they didn’t at all. …

“We’re not playing bad hockey at all by any means right now. We’re going to run into hot goalies and hot teams.”