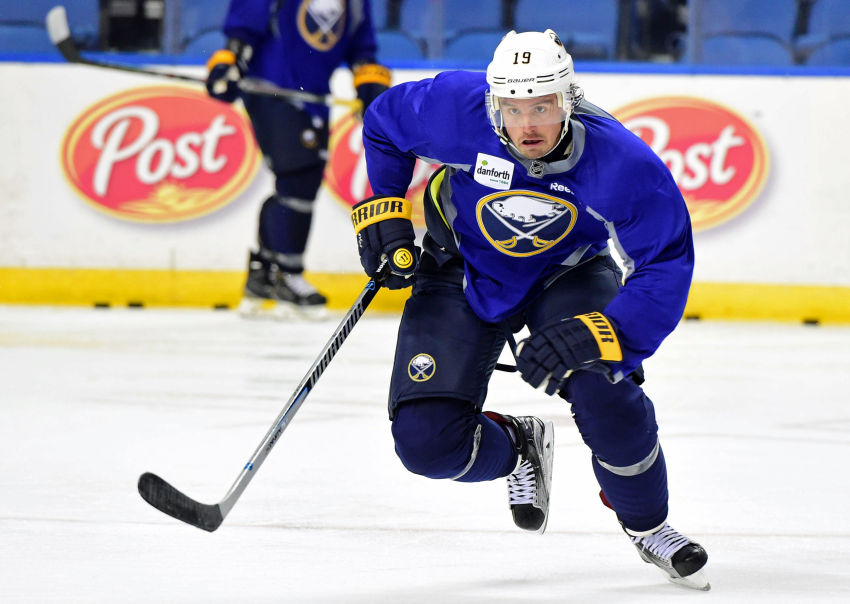 TORONTO – Growing up about 140 miles away in Goderich, Ont., Buffalo Sabres center Cal O’Reilly witnessed some epic meltdowns when he beat his younger brother, Ryan, in hockey games.

“When he would lose, he would start throwing stuff – sticks and anything he could get his hands on,” Cal O’Reilly said Friday prior to the Sabres’ 6-4 preseason win against the Maple Leafs, the brothers’ first appearance together as teammates at any level of hockey.

“If he lost, we’d usually all start running, because we knew the sticks were coming,” he said.

“He’s a huge reason I’m even able to play in the NHL,” Ryan said. “So he’s definitely an idol, someone I’ve looked up to my whole life.”

Their careers never intersected until July. Days after the Sabres acquired Ryan, 24, in a blockbuster deal with Colorado on June 26, they signed Cal, 28, to a one-way contract worth $1.4 million over two years, a massive sum for player the Sabres want to lead a scoring line with the Rochester Americans.

To play on the same team, even in an exhibition contest, was a special experience. Their father, Brian, and mother, Bonnie, watched from the Air Canada Centre stands with about 30 family members and friends.

Sabres coach Dan Bylsma let the brothers start the game as linemates, their only shift together.

“Anytime you get over 30 tickets to the game you should probably get in the starting lineup,” Bylsma said. “They were just fighting over which was going to play center.”

“Kind of funny, I don’t think we’ve ever been so polite to each other, trying to work together,” joked Ryan, who scored short-handed.

He added: “Being on the same team and trying to win together is definitely like a dream come true, I guess. Mom’s excited now, she’s just rooting for one team.”

There might be more opportunities to watch her sons. Bylsma briefly had Cal with Pittsburgh in 2011-12 and respects his talents. He could offer the Sabres some valuable forward depth.

“Almost every day in our evaluation the coaches have been impressed with Cal and his work, his intelligence, how he plays the game,” Bylsma said. “He plays it at both sides. He’s got smarts and patience and playmaking with the puck.”

Bylsma believes Cal, who had 51 assists and 61 points with the Utica Comets, was the AHL’s best player last season. Still, while Cal has 13 goals and 41 points in 113 NHL games, mostly with Nashville, he hasn’t made a big league appearance in four years.

Ryan said Cal, who had an assist Friday, processes the game better than most players.

“He’s got such a good head for it,” he said. “He’s one of the best passers I’ve seen and playmaking ability, he can create so much with smarts.”

Naturally, Cal’s occasionally frustrated with his career. But he knows some seasons he wasn’t good enough to play in the NHL.

“I had a few years where I had some injury trouble, and then I just didn’t … play as myself,” he said. “I didn’t deserve to be here. I think last year was a good year for me getting the confidence back in myself.”

Thanks to four goals from their special teams – three power play and one short-handed – the Sabres roared back from an early 2-0 deficit to win.

Goalie Robin Lehner stopped 22 of 25 shots before Nathan Lieuwen replaced him after 40 minutes.

Notes: Instead of retiring following the season, legendary play-by-play man Rick Jeanneret will call Sabres games again in 2016-17, the team announced Friday. … Winger Jason Akeson’s high hit on Ottawa’s Colin Greening on Wednesday was ruled unavoidable after a hearing with the NHL Department of Player Safety on Friday. Akeson won’t be disciplined. … Defense prospect Brendan Guhle, the 51st overall pick in June, played his third straight game and had two assists. … Wingers Dan Catenacci and Justin Kea both made their NHL preseason debuts. Bylsma held Catenacci, who’s from nearby Newmarket, out earlier this week so he could play here.