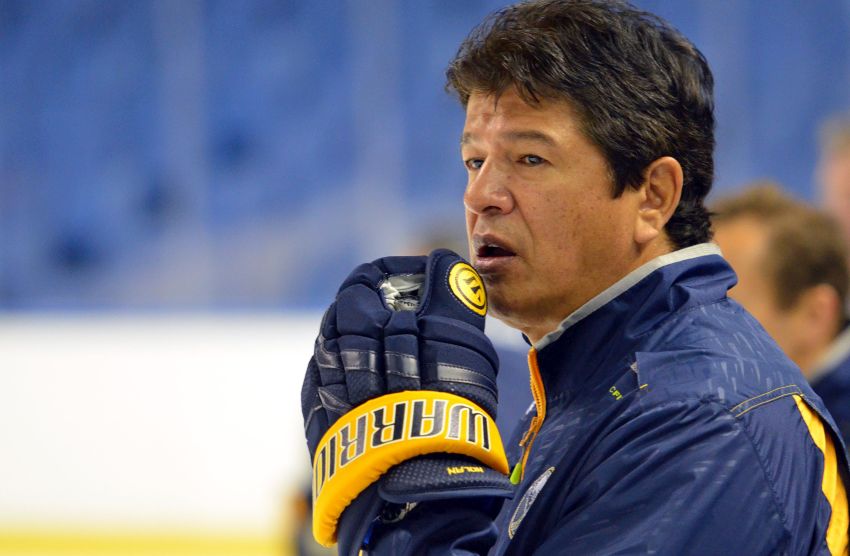 BUFFALO – Whether you’ve been in the NHL for 50 years or this is your first season, Sabres coach Ted Nolan said, “opening night’s always exciting.”

“Butterflies floating around like crazy,” Nolan said Wednesday after the Sabres prepared for tonight’s season opener against the Columbus Blue Jackets. “If it doesn’t happen, something’s going to be wrong.”

Tonight will be extra special for Nolan, who’s beginning his first full season as Sabres coach since 1996-97. He hasn’t coached an NHL team on opening night since 2007 with the New York Islanders.

His last Sabres home opener was Oct. 12, 1996, the first game at what was then called the Marine Midland Arena.

Nolan hadn’t thought about how special the opener would be until his wife, Sandra, mentioned it Tuesday night.

“My thought process was getting this team ready and making sure we thought of everything to get them ready,” he said. “I never thought about myself, which is a good thing. We’ll get this team ready. So now I get asked that twice. I’ll be nervous like everyone else.”

Understandably, Nolan hasn’t heard much owner Terry Pegula recently. But Pegula and his wife, Kim, plan to attend tonight’s game after the NFL finalized their purchase of the Buffalo Bills on Wednesday.

“It’s been pretty busy for Terry and Kim, for sure, to do what they’ve done acquiring the Bills,” Nolan said. “I’m quite sure it’s not like buying the corner store down the street. It’s a lot of work. His heart’s here. He’s been calling in and checking in.”

Nolan said defenseman Jake McCabe’s injury is worse than the Sabres originally thought. The rookie had two maintenance days before he was placed on injured reserve Tuesday.

Jhonas Enroth doesn’t think he’s the Sabres’ No. 1 goalie yet. Enroth, who will start tonight, beat out Michal Neuvirth during the preseason.

“It’s only for one game, I think,” Enroth said. “Obviously, I have to stay humble and keep performing well, otherwise Michal’s going to take over. So I know it’s a tough competition. I’m sure (there’s) going to be a couple games that Michal’s going to play well, and you guys are probably going to call him the starter.”

Rochester has named defenseman Drew Bagnall, not forward Matt Ellis, its captain. Ellis wore the ‘C’ at the end of 2012-13 and last season before a 50-game recall.

According to reports, Americans coach Chadd Cassidy believes Ellis could be summoned again, so he named Ellis an alternate captain with forward Phil Varone.