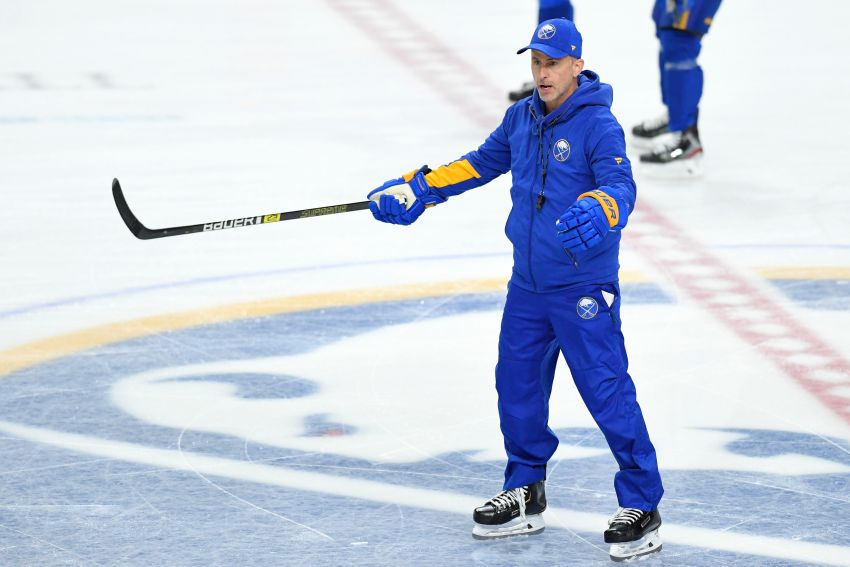 Then two more names, Jack Eichel and Jake McCabe, popped into his head.

One year ago today, Granato inherited a veteran-laden team at its nadir. The Sabres were 12 losses into what would become a stunning 18-game winless skid.

Having showcased improvement in 2019-20, the Sabres thought they could contend for a playoff spot coming out of the long COVID-19 break.

Instead, they imploded spectacularly, plummeting to the NHL’s basement again. Long before general manager Kevyn Adams mercifully fired Ralph Krueger and promoted Granato on an interim basis, it was clear the Sabres would be overhauling the roster and begin rebuilding again.

“A lot can happen in a year,” said Granato, whose Sabres begin a three-game road trip tonight against the Edmonton Oilers.

Today, all seven players Granato mentioned are gone. Only nine players from Granato’s first game as coach are still with the Sabres.

“When you reflect on where we were one year ago and we look at all that personnel that’s gone, it did happen pretty fast,” said Granato, who was named the permanent coach June 29. “We can continue that acceleration, that speed and progress, I believe, because of the age of our guys.”

The decision to start over again and focus on youth has created hope for a franchise nearly 11 years removed from its last playoff appearance.

Much of the optimism rarely felt in these parts can be traced to Granato, a hockey lifer who has established himself as the Sabres’ best coach since Lindy Ruff. Granato has also given the Sabres much-needed stability behind the bench.

Right away, Granato empowered some of the Sabres’ youngsters, and they have seized their new roles and taken ownership of the team.

Defenseman Rasmus Dahlin and centers Casey Mittelstadt and Tage Thompson were all struggling and playing secondary roles before Granato took over. Now, they’re three of the Sabres’ top talents.

Dahlin has morphed into an NHL All-Star and one of the league’s top young defenders. While Mittelstadt has battled injuries all season, he earned the No. 1 center job out of training camp. Thompson, a winger until late in camp, has thrived since Granato switched him to center, scoring a team-high 24 goals.

Veterans have recaptured their old form, too. Winger Jeff Skinner, a healthy scratch shortly before Granato took over, has scored 23 goals this season.

In trading Eichel, Reinhart and others, the Sabres, who started drafting much better during ex-GM Jason Botterill’s tenure, have created a deep pool of prospects and young talent. They’ve also stockpiled high draft picks.

The quality of prospects the Sabres possess separates this rebuild from past ones.

Even in brief recalls to the NHL, youngsters like goalie Ukko-Pekka Luukkonen and winger Jack Quinn looked like difference-makers. Others like winger Peyton Krebs and defenseman Mattias Samuelsson have entrenched themselves in the lineup.

And in a few weeks, defenseman Owen Power, the first overall pick in 2021, will likely sign his entry-level contract when his season at Michigan ends.

Granato, 54, can’t help but be excited about the future.

“It seems like a long, long time ago, probably because looking ahead is so exciting,” Granato said of looking back on his first year as coach. “And the excitement ahead is how much better these guys can still get. I look at our organization compared to when I look around the league and there’s only a few organizations that are getting better every day.

“And then there’s a lot of organizations that are struggling just to stay the same every day, just by virtue of age, by virtue of contracts, those sorts of things. So it is exciting because we have such a capacity to reach. But it’s been wild.”

The wins rank as the Sabres’ most significant in a long time.

When Adams examines the last year, he said Granato’s ability to provide a pathway for individual and team success jumps out at him. Granato clearly explains to his players what is expected of them and how they can get there.

“Then as a team, ‘Here’s the core principles of our team, here’s the way we want to play’ and (he) kind of didn’t overly complicate it,” Adams said told the Times Herald. “I think that’s a subtle art of coaching. You could be the brilliant coach and have a lot of Xs and Os, but if your players are thinking too much and it’s complicated, it can actually be challenging.

“So right away, I sensed from Donny he was embracing the opportunity to help these players grow. He was embracing the development part we needed. Once we made this decision (to rebuild), we knew we were really going to have to reshape things, identify the young core and bring them along, and Donny and the staff were great about that.”

Skinner said “everyone on the team is aware of where they stand” under Granato.

“When you look at a coach, I think almost all of them or all of them have a good understanding of the game and systems and how they want to play, and then you look at sort of intangibles and what else they bring to the team,” Skinner said. “And for me, Donny’s really strong and communicating and he’s also very positive, I think.

“When you have that combination with a young team, I think it helps because you have a lot of guys coming up and sort of trying to establish themselves in their careers, and to have that support from the coaching staff is nice.”

One thought on “One year after hiring, Don Granato has dramatically changed the Sabres”