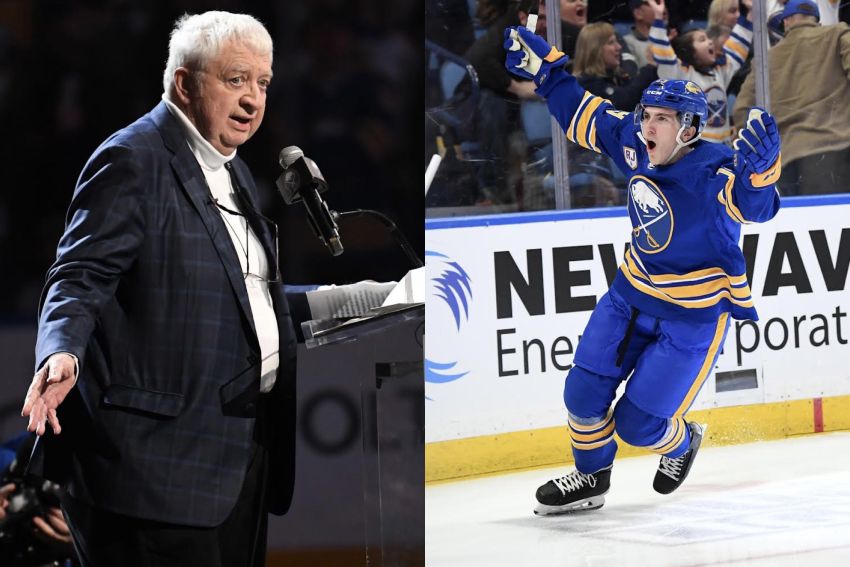 BUFFALO – It felt like it was 1999 or 2006 again. A chance to honor Rick Jeanneret filled KeyBank Center for the first time this season, and crowd started buzzing long before the legendary Sabres play-by-play man walked on the ice.

Once Jeanneret’s banner raising ceremony started Friday, one of the most emotional nights in the building’s 26-year history got underway.

The capacity crowd roared for Jeanneret, giving him a prolonged standing ovation and chanting “RJ,” his nickname. The beloved Jeanneret, who’s in his 51st and final season, held back tears and closed his remarks by telling his fans he loved them.

The game hadn’t started, and it was already an unforgettable night.

Then the upstart Sabres put on a show for the 19,070 fans, beating the Nashville Predators 4-3 and offering a glimpse into what could be a very bright future.

When Sabres winger Peyton Krebs opened the scoring 2:14 into game and jumped into glass to celebrate, the raucous crowd erupted. Then when center Tage Thompson scored the first of his two goals at 6:14, putting the Sabres back up, the fans roared again.

“There is no question players fed off of that crowd,” said coach Don Granato, who donned suspenders and turtleneck for his postgame news conference, a tribute to Jeanneret. “There’s no doubt. The energy in that building, I mean, they knew the fans were coming. The history. For all of us not from Buffalo here with this privilege, honor of being here and being part of the Sabres, you know the history, you’ve watched it from a distance.

“You’ve put a jersey on and practiced every day waiting and hoping to feel what you could feel tonight, before the puck dropped even.”

The Sabres embraced that wave of emotion and energy until the very end. As they clung to a late one-goal lead, the crowd starting chanting “RJ, RJ” again.

“That energy can be adverse energy and pressure, in the form of pressure,” Granato said following the Sabres’ ninth win in their last 15 games. “I was really most excited that it wasn’t. It was real positive energy tonight that our guys, they got better. They knew what to do at the end of that game to win.”

Following the game, in an unforgettable scene, winger Alex Tuch, a lifelong Sabres fan, escorted Jeanneret, who watched the end of the game near the bench, on the ice. The entire team then posed for a photo with Jeanneret.

“I haven’t been here too long, but you can see what he meant to the fans,” Krebs said “And it makes you want to win the Stanley Cup, for sure. Having those people in the building every night, we’re going to win hockey games.”

Granato said the photo “was an organic moment.”

Krebs said: “That was unbelievable. You get chills, a little teary eyed, for sure, seeing that. That’s a special moment and we want to have a lot more of those coming up.”

Thompson, who hit the 30-goal mark for the first time in his career, said “the crowd tonight was unreal.”

“It makes a really big difference,” he said. “The guys feel it out there, just the energy, it gives us a lot of jump. And it’s really exciting to play in front of it. Obviously, all that credit goes to RJ and all the amazing things he’s done for this city and the organization the past 51 years.

“Hopefully we can continue to build this thing that we got going. Down the road, that’s something we’re really looking forward to, is playing in front of that sold-out crowd.”