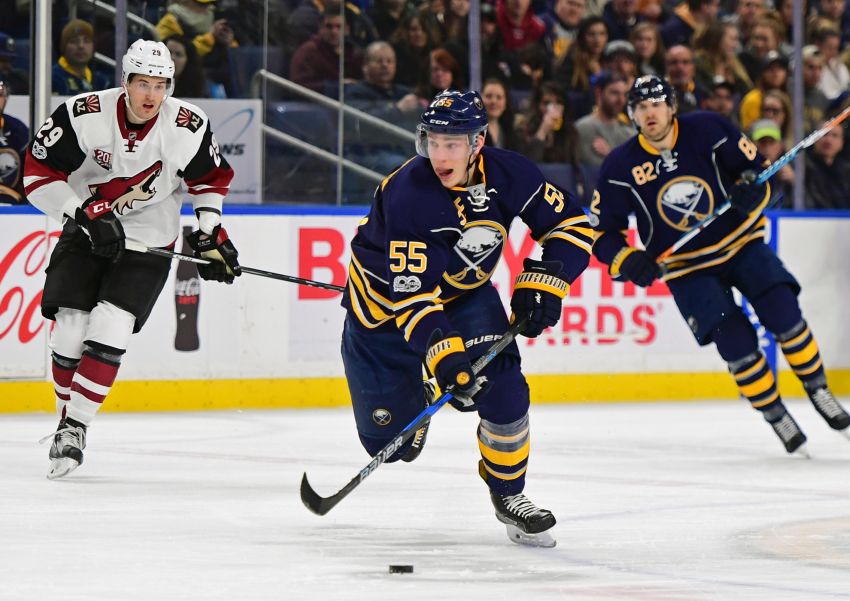 BUFFALO – In suspending Sabres defenseman Rasmus Ristolainen three games Thursday for checking Pittsburgh’s Jake Guentzel, the NHL said the Finn made “substantial head contact” and could’ve altered his path toward a player ineligible to be hit.

The concussion Guentzel suffered on the hit and Ristolainen’s previously clean record in his four-year career also factored in the three-game ban, said Patrick Burke, a director in the NHL Department of Player Safety, in a video explaining the suspension

“Ristolainen has sufficient time to adjust his path to avoid or minimize this hit, and instead he finishes a hard, forceful body check on a player who is not eligible to be hit,” Burke said. “We acknowledge Ristolainen’s argument that because he is approaching this hit leading with his back he was unable to adjust his path quickly when the puck was deflected.

“However, it is Ristolainen’s choice to hit with his back that limits his own ability to react or pivot quickly.”

Burke said it was reasonable for Ristolainen to assume Guentzel would gain possession of the puck.

Still, “The onus is on the hitter to ensure that the player he is hitting is eligible to be checked,” he said.

Earlier Thursday, before Ristolainen had a phone hearing, he said he never expected to receive a game misconduct.

Ristolainen, however, now understands why he was given a major penalty.

“He obviously didn’t have the puck … he got injured,” Ristolainen said following practice inside HarborCenter. “I don’t know what the rules are, but it was probably the right call then.”

Of course, it would’ve been a much different hit if Guentzel had the puck. Ristolainen said he planned to use that as a defense during the hearing. He believes he had about a half-second to react.

He added: “I don’t want to hurt anyone. It’s too bad he got injured.”

Ristolainen now has a record, so if he gets in trouble again, the suspension could be longer.

The suspension will cost Ristolainen $90,000, which will be donated to the Players’ Emergency Relief Fund.

The Sabres’ best defenseman will miss Saturday’s home game against the Toronto Maple Leaf’s, Monday’s against the Florida Panthers and Tuesday’s road contest against the Columbus Blue Jackets.

Ristolainen plays in every situation, skating about 27 minutes a game. He has a team-high 39 assists and 44 points in 74 games this season.