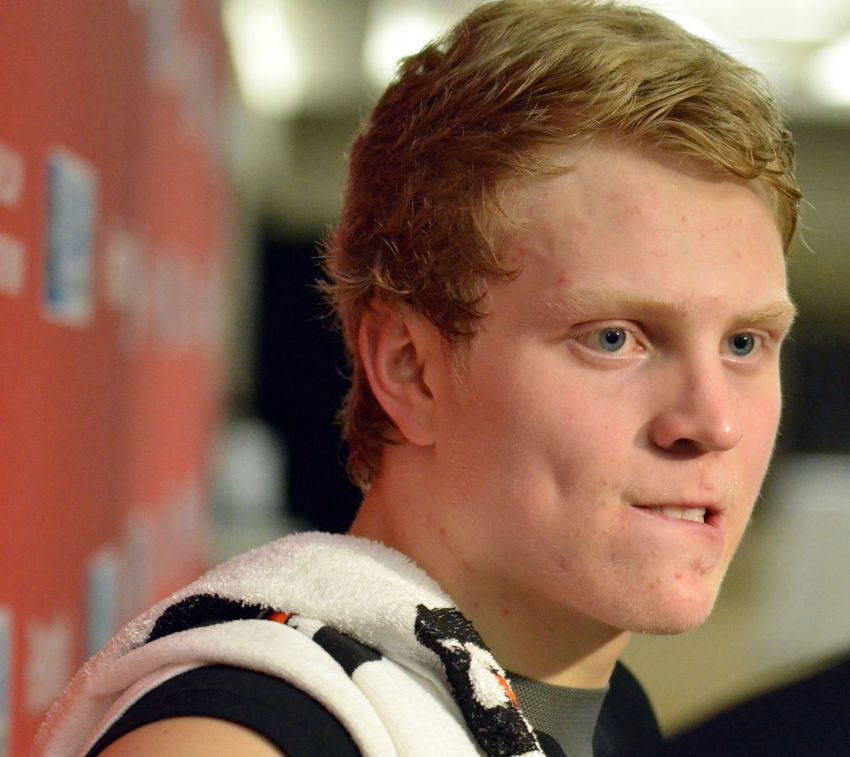 Still, Shinkaruk, the No. 6 prospect among North American skaters for Sunday’s draft, knows size is “definitely a question mark around me going into this draft.” The forward isn’t worried, though.

“A guy like Patrick Kane, he’s kind of answered those questions for me,” Shinkaruk said earlier this month at the NHL Scouting Combine. “So that’s something I’ve never really tried to think about. I always say, ‘I am what I am.’ I’m just trying to be the best player I can be in my frame.

“I think for the scouts, they can look at the smaller players and see them have success just like Martin St. Louis did this year leading the NHL (in scoring). Lucky for me those guys have done a good job of answering those questions.”

“It was a great development year for me,” Shinkaruk said. “I matured a lot as a player and as a kid this year. At the end of the day, that’s what I wanted to focus on. My whole game is a lot better than it was last year. Being the captain was a huge honor. Not many 17-, 18-year-olds get to do that in the CHL. I thought I grew a lot as a kid.”

Here’s more on Shinkaruk, who could be available when the Buffalo Sabres have their first selection at No. 8:

Shinkaruk, a center growing up before switching to wing, on his preference as a professional: “I think right now my preference would be wing. I’ve played there for the better half of three years in Medicine Hat. But my whole life growing up I was always a centerman. At the end of the day, I’m comfortable in both positions. I take draws all over the ice. So I’m not really too worried about what position the team wants me to play. I like both.”

The 181-pound Shinkaruk on facing bigger players: “I’ve always been a smaller guy, and growing up you just learn that. I’ve never looked at myself as a small player. I’m a competitive kid. No matter how big that defenseman is or the forwards are, I feel like I can outmatch them and outbattle them. So I think for me it’s a trait I’m lucky to have. I’ve never felt small, and that thought has never been in my mind. I think I’m lucky to have that mentality.

“But at the end of the day, I realize you have to be quick with my frame and you have to be skilled. So I’ve worked on those skills, but I’ve never seen myself as a smaller player.”