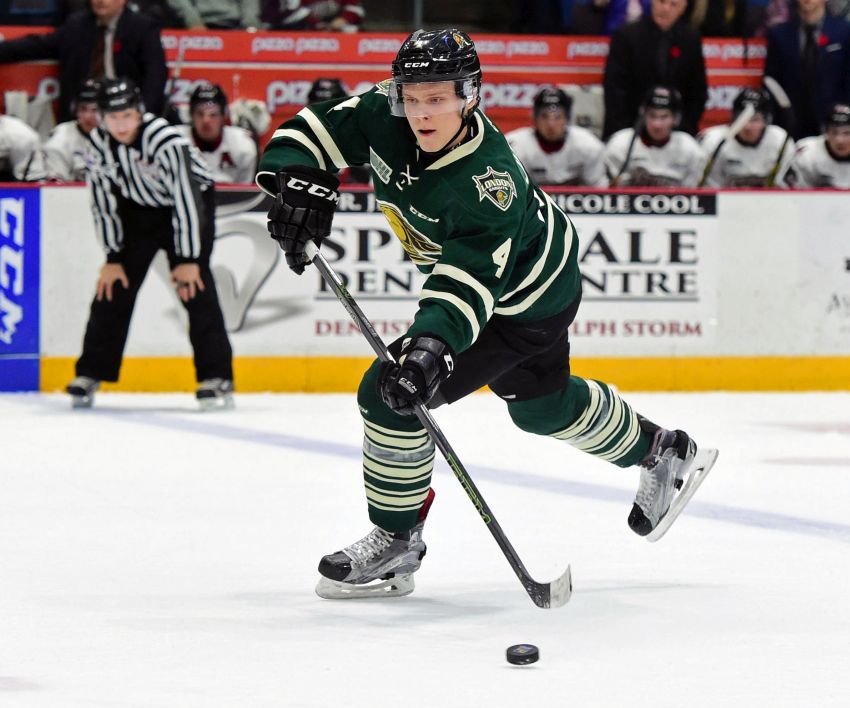 BUFFALO – Ask Olli Juolevi a question about his talents, and the London Knights defenseman’s response might surprise you.

In an age in which elite athletes are often taught to give vague, vanilla answers, Juolevi has no problem saying what he really feels.

For example, Juolevi, even though he has some stiff competition from Jakob Chychrun and Mikhail Sergachev, recently said he expects to be the first defenseman chosen in Friday’s NHL Draft the Sabres are hosting inside the First Niagara Center.

What makes him the best?

“I’m the smartest of the three,” Juolevi said June 4 following fitness testing at the NHL Combine inside Harbor Center. “It’s something that’s hard to teach.”

Well, at least Juolevi, 18, backs up his words. The Finn just finished a terrific Ontario Hockey League rookie season, scoring nine goals and 42 points and another three goals and 14 points during London’s playoff run to the Memorial Cup, the Canadian Hockey League championship.

“He’s one of the smartest players in the draft, in my opinion, really understands the game in all areas of the ice, and his game moving forward coming out of your zone is really spectacular,” NHL Central Scouting’s Dave Gregory said. “He’s such a great skater and puckhandler that he can give himself all kinds of time to create an impact.”

The 6-foot-3, 179-pound Juolevi, who said he’s an offensive defenseman with “a two-way game,” won’t measure himself against a player like Chychrun, a prospect some have ranked ahead of him.

“I trust myself,” Juolevi said. “I think I’m the best D. So I don’t think about anyone else.”

Where does Juolevi’s confidence come from?

“When you’re a small kid, you don’t care if you’re confident or not, you just go and play,” he said. “You’re almost like (in the) pros now, so now you have to be confident. You have to know how good you are.”

Gregory believes Juolevi’s talents will translate when he moves up and must handle a faster game.

“He never has a bad game, it seems like, and then he’ll have high-end games with tons of impact and lots of points,” Gregory said. “I think he’s a pretty complete player and (has a) really, really big upside.”

Juolevi said he spoke to the Sabres, who own the eighth overall pick, at the combine.