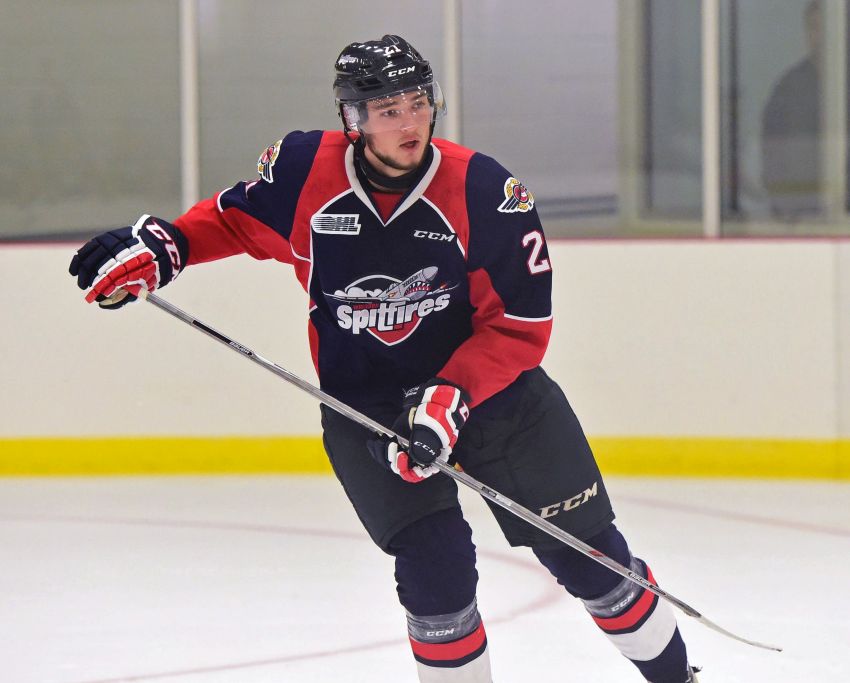 In his draft season, traditionally a breakout campaign for junior prospects, Brown had mustered only six goals by the 35-game mark.

“I believe he was humbled by his start, and when you get humbled like that, you look for help,” Windsor coach Rocky Thompson said.

Earlier in his career, Brown, a possible top-10 pick at Friday’s NHL Draft in Buffalo, could play on the perimeter because of his creative playmaking ability and some talented linemates. Now, he needed to start utilizing his 216-pound frame to get to the net and develop a shoot-first mentality.

“He started out a little bit rough, had some bad habits,” Thompson said.

Brown quickly corrected those bad habits, scoring 15 goals in his final 24 games, a dramatic in-season turnaround. In a matter of months, his draft stock soared.

“I think my game just kind of kept rising,” Brown said June 4 following NHL Combine fitness testing inside HarborCenter. “I got better every game. In the second half, I gained a whole lot of confidence in all parts of my game, holding onto the puck and the patience and the poise. Once I gained some confidence, my game took off.”

So how did Brown, who grew up in St. Louis, gain so much confidence during his second Ontario Hockey League season?

Thompson said Brown, 18, had never trained during the summer until last year, so he “was really just scratching the surface of what it takes to be an elite player at the next level.”

In the beginning of the season, as Brown started buying in and seeing changes in his game, his skating and speed improved, Thompson said. The Spitfires put him on a leg workout protocol during the year, something he had never done.

“It’s really like he became a believer, which is testament to him and his character to be able to go through that transition in a relatively short period of time,” Thompson said.

Brown, who was becoming more comfortable in his body, started going to the dirty areas around the net. Because of his size and reach, it became “nearly impossible” to get him off the puck,” Thompson said.

“So with the habits, we started to correct these things by telling him once you pass the puck, now it’s time to go to the net and to use those physical advantages that he has over the people,” Thompson said. “It wasn’t an unwillingness, because when he goes and bullies his way to the net, no one can handle him.”

Brown, the son of former NHL defenseman Jeff Brown, talked to the host Sabres, who pick eighth, at the combine. Given they already have two top centers – Jack Eichel and Ryan O’Reilly – and shifted Sam Reinhart from the middle to wing last season, they might pass on taking a center early.

Still, if he’s available, Brown might be too good to pass up. Thompson recently heard Brown and San Jose star Joe Thornton mentioned together.

“(Thornton’s) a guy who likes to pass first, sees the ice very good,” Thompson said. “But Joe can definitely shoot the puck. I think that’s probably what Logan would like to model himself after.”