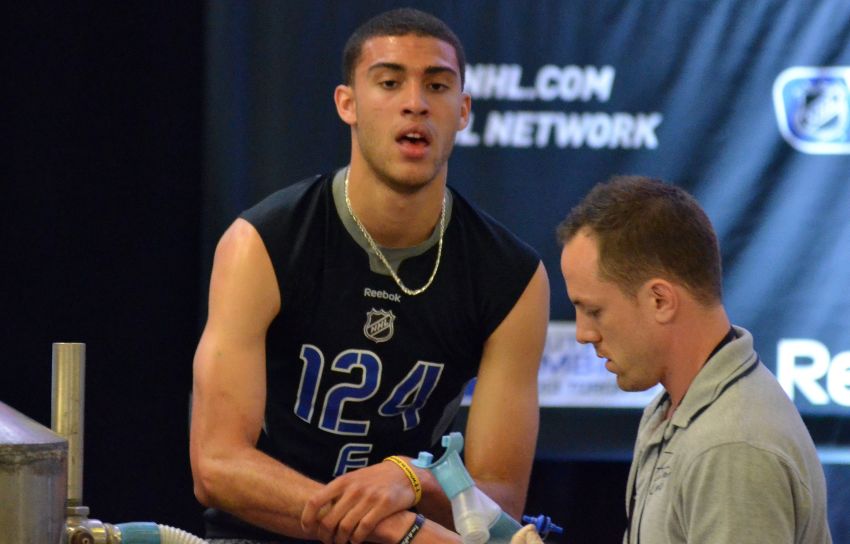 MISSISSAUGA, Ont. – Justin Bailey didn’t mince words. On June 16, the Williamsville native, a possible second-round pick in Sunday’s NHL Entry Draft, tweeted, “Happy Father’s Day to the closest thing I have to a Dad! Thanks for everything.”

The 17-year-old posted two Instagram photos of him beside his grandfather.

Bailey, a slick winger with the Ontario Hockey League’s Kitchener Rangers, has a famous father, former Buffalo Bills linebacker Carlton Bailey. But the 10-year NFL veteran has never had much to do with his son.

“She’s everything to me,” Bailey said earlier this month at the NHL Scouting Combine. “I know I’m everything to her. It wasn’t easy. It looks a lot easier than it is now when I’m 17. Don’t get me wrong. My family’s been a huge support. My grandfather’s a father figure to me as well as my grandmother. She’s a mother figure. Growing up with a single parent, with early practices, money and transportation is always tough.

“But the hard work that she put in really paid off. Whenever things get tough, I definitely think of my family and obviously right back to God as well to keep me going and keep me strong.”

Bailey said he doesn’t “have a ton of contact” with his father.

“It’s more during birthdays or holidays,” he said. “But when we do talk he does try to get his two cents in. They usually are pretty lengthy. He tries to get in maybe those lessons he didn’t give to me as a kid.”

Bailey, the No. 38 prospect among North American skaters for Sunday’s draft, still had professional athletes influence him as a child, however. Back then, his mother and aunt lived together in a Buffalo condo. Sabres Matthew Barnaby, Michael Peca and Rob Ray lived nearby.

“My mom and aunt grew a little bit of a relationship with them,” Bailey said. “Just watching them and being able to see them on a personal level, I just wanted to be like them. I got into hockey and loved it ever since.”

Today, he still calls the retired Barnaby, who possessed an agitating, gritty style, his “mentor.”

“He’d be at one of my birthday parties and I’d go that Friday and watch him play,” Bailey said. “I kind of wanted to be like him. I don’t think I knew what kind of player he was at the time, so I don’t want to model my game too much after him. But that’s who I grew up idolizing.”

While the hockey wasn’t too tough, LaFontaine, who took Bailey into his home, influenced the prospect greatly.

“There was a lot of things, mental side of the game, getting to know myself more as a player, just the way we’d watch hockey and the way he’d break down the games was something special,” Bailey said.

Bailey had committed to Michigan State, but decided to forego the NCAA and play in the OHL. The jump from Long Island to Kitchener was huge.

“He came into the OHL (last year) pretty raw,” NHL Central Scouting’s Chris Edwards said. “He’s had a big learning curve this year. He was always in a position where he was a big fish in a small pond type of thing, and now he’s playing against men that are as big and strong as he is, and certainly he adjusted very well.”

Here’s more on Bailey, who recently attended Buffalo’s combine and could be available when the Sabres pick 38th and 52nd:

Bailey, who’s 6-foot-3 and 186 pounds, on in his style: “I’m a pretty fast guy for my size. I used that to my advantage. Size is something you can’t teach. … I’m able to make plays like a playmaker makes and I’m able to score goals like a goal scorer does. But I know that when I make the jump to the NHL that I’m going to be a power forward, whether that means putting on 20, 25 more pounds and being a little bit more physical.”

Bailey on why he believes his style compares to St. Louis’ David Backes and Carolina’s Eric Staal: “(Backes is) a pretty gritty guy, which is something I’m trying to acquire. I’m not as gritty, but it can’t hurt to be a lot more physical. … They’re obviously centers and I’m a winger, but just their style of play. They compete hard. They don’t get knocked off pucks. They’re always in the middle of something. They’re big guys and they’re leaders of their team.”

Edwards on Bailey’s size and style: “Sometimes we expect big guys to be big, physical, punishing guys, and they’re not that. If they’re effective in other ways, then they got to find a way to be effective. If that’s what he’s going to be, he certainly doesn’t get pushed around on the ice. He gets involved. He battles.”

He added: “I like what I’ve seen. Whoever drafts him is going to be happy with what they’ve got as he continues his development.”

Bailey on growing up a Sabres fan: “There’s a video from last year that’s got me commentating on all the Sabres from when I was four years old. So I was a pretty big Sabres fan back then.”