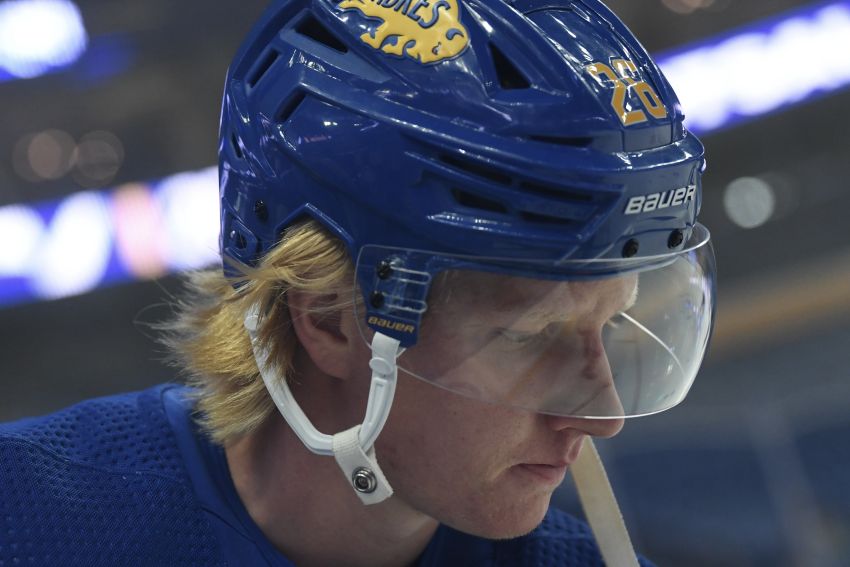 BUFFALO – This is all new, you know. In the past, Sabres defenseman Rasmus Dahlin wasn’t awarded more than 25 minutes of ice time and given the difficult task of shutting down the opposition’s best talent.

At times, Dahlin, 21, has struggled in his new role as the No. 1 defenseman. The Swede often puts too much pressure on himself, and when things turn sour, he can respond by pressing and trying to impose his skill on the opponent. That’s when he usually creates more trouble.

But over the past month or so, Dahlin, the first overall pick in 2018, has developed into perhaps the Sabres’ most consistent and tenacious presence.

Dahlin has kept playing aggressively while embracing his growing defensive responsibilities. In morphing into a stronger, more reliable two-way presence, he has elevated himself to a new level in his fourth NHL season.

The rest of the league has noticed Dahlin’s maturation, and on Thursday, he was the lone Sabre named to the Atlantic Division squad for the 2022 NHL All-Star Game on Feb. 5 in Las Vegas.

“I haven’t really thought about that,” Dahlin said Wednesday of a earning spot in the game. “It’s a dream.”

It’s a dream that seemed far-fetched 10 or 11 months ago as Dahlin regressed mightily under ex-Sabres coach Ralph Krueger. He looked lost and overwhelmed, losing his aggression while becoming a gaffe machine.

He finished the season with a ghastly, league-worst minus-36 rating.

But Dahlin has rebuilt his game under coach Don Granato, and these days, he said he has never possessed more confidence.

“This is my first year playing against the other teams’ top lines,” said Dahlin, who had compiled six goals, 22 points and a minus-12 rating in 35 contests entering Thursday’s road game against the Nashville Predators. “I really feel like I am taking the next step and have been able to play defensively against the best players in the league. Everything starts with the defense. If you’re playing good D, you’ve got good confidence.”

So what has changed over the past several weeks?

“You have very, very few defensemen that actually kill plays and can transition plays,” Granato said following Wednesday’s practice inside KeyBank Center. “And if you watch him, he can do both. … That’s why he’s an elite defensemen.”

Granato cited a play early in Tuesday’s 6-1 loss to the Tampa Bay Lightning as an example. Dahlin stymied an opponent and positioned himself to survey the ice. Under pressure, he looked past layers of defenders and fed Cody Eakin a long breakaway pass.

“It’s absolutely amazing, and guys just can’t do things like that,” Granato said of the dynamic feed. “So … he’s starting to identify with how to get better with what his skills sets are and how to impose at the right moments instead of trying to do it all the time. And that’s still going to be a process for him.”

Dahlin’s willingness to attack his problems and seek solutions has buoyed his growth. If he experiences a rough night, Granato said he receives a text from Dahlin asking if they can watch film the next day.

Earlier this season, after he was beaten for a goal on his off side, he was on the ice early before practice working with assistant coach Matt Ellis to improve his defending.

“Not all other guys, but sometimes other guys have a bad night, they don’t want to talk to a coach, they want to hide from a coach,” Granato said. “This guy, he cannot handle not having success, and he’ll look in the mirror and say, ‘I need to be better.’ And so as a coach, you know he’s going to be better because he’s addressing it. And it’s the guys that hide that you worry about that don’t get better and they don’t improve.

“And that is the culture we’re trying to build here, is we know we need to get better as an organization, we need people that also focus on that. And Dahls is a real leader on that.”

Granato, of course, has played a prominent role in Dahlin’s progression.

“Donny, he’s an unbelievable coach,” Dahlin said. “He gives every single guy in the locker room an opportunity. He gives confidence to everyone. He basically tells everyone to go out and earn it. You have every chance in the world to succeed.”

After Granato took over last season, Dahlin settled down and started looking more like his normal self. Granato’s up-tempo system is better suited to Dahlin’s skills.

Dahlin clearly trusts Granato, who has regularly defended him when he’s criticized. As a youngster hyped as one of the greatest defense prospects ever, Dahlin has been expected to live up to everyone’s lofty expectations.

On some bad Sabres teams, every mistake he makes seems to be scrutinized.

“That comes with the territory,” Granato said of the criticism Dahlin receives. “I mean, he’s a No. 1 pick overall, he’s our top D. He’s got nowhere to hide on our team. He’s our top defenseman. He’s (21) years old. It’s not like he’s come into a super veteran team with supporting guys that have longevity. He’s our top D, and so there’s nobody to take the heat off him. We … put him against the best defensive situations.

“Two games ago, he was on for just about every D zone faceoff, because we win the draw to him, it’s most likely going to get out of the zone. And so he’s taking more D-zone draws than even offensive zone draws, and we all know we want him on the offensive side. And so because he has so much responsibility, I think the tag of being a No. 1 pick overall, you’re going to be compared to the best players in the league, and a lot of the best players have a lot more support than he has right now.”