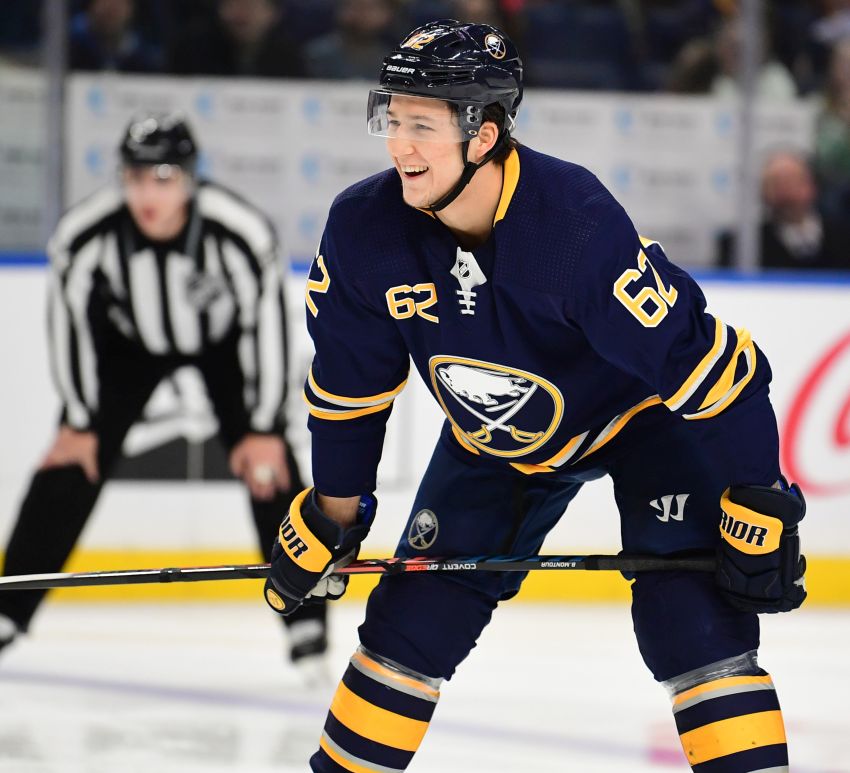 Brandon Montour has played 11 games with the Sabres. ©2019, Hickling Images

“I got kind of caught with how they want me to play, specific areas where I was just a player on the team,” Montour said Thursday inside KeyBank Center.

Montour, of course, loves having the green light to freewheel with the Sabres. The UMass product regularly joins the rush, adding another wave to the offensive attack.

“I think he’s enjoying the opportunity,” Sabres coach Phil Housley said. “He’s just really still trying to get acclimated to his teammates and just trying to be part of the solution. I just like the way he plays. He plays an aggressive style, he likes to join the rush, he wants to get on the attack and he’s got a little edge to his game.”

The Sabres want Montour, 24, to be one of their top guns. That’s why they paid such a hefty price – defense prospect Brendan Guhle and a first-round pick – to pry him from the Ducks on Feb. 24.

“Here, I have that freeness to use my strengths,” said Montour, who will likely play beside rookie Rasmus Dahlin again Saturday versus the Montreal Canadiens, the start of a three-game road trip.

Through 11 outings with the Sabres, Montour has scored two goals and six points. While it’s a small sample size, that’s a 15-goal, 45-point pace over a full season.

Those numbers are huge benchmarks for defensemen. Overall, Montour has scored seven goals, 31 points and a minus-17 rating in 73 games this season.

“He adds a dynamic to our offense that’s new to us,” Sabres center Evan Rodrigues said. “He’s always jumping up in the play, he’s always adding a fourth wave. He’s sometimes the first guy in on a forecheck, and that’s just a testament to his speed.”

Rodrigues said in Wednesday’s 4-2 loss to Toronto, one of the Maple Leafs chipped the puck by Montour to create a two-on-one before he raced back to stymie it.

“With his skating ability, he gets back, turns it into a two-on-two,” Rodrigues said.

Montour and Dahlin, perhaps the league’s best young defenseman, have a chance to become a “dynamic” tandem, Housley said

“They control the game back there,” Housley said.

So far, Montour feels comfortable with the Sabres and good about what he has accomplished.

Well, other than not winning enough games.

The Sabres are 2-7-2 with Montour. They haven’t won a game in regulation with him yet.

“That’s obviously a tough issue,” he said of the losing.

Having spent most of the season in Anaheim, one of the NHL’s bottom-feeders, Montour has endured a lot of losing over the past six months.

Not surprisingly, Montour said this has been the toughest season of his career. He made the playoffs his first two years, playing 17 games as the Ducks reached the Western Conference final in 2017.

“My years past, I’ve had success. I’ve been on some good teams where we made some runs in the playoffs. I think it’s one of those things where it’s going to be an adjustment. It’s something that I can experience and learn from, those highs and lows in a year. I’ve definitely had a lot of highs and lows this year.”

Those lows can be rough. Montour said managing emotions as a team has been the most difficult part of the season.

“You just have to gain your confidence as fast as you can and kind of regroup and wash that game or wash that shift,” he said, “wash whatever negative things you have and focus on the next day or the present.”