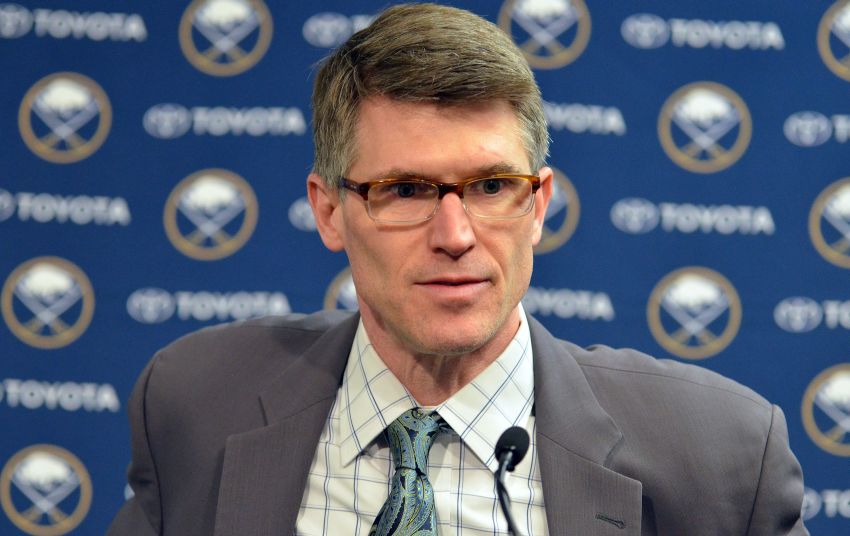 Ron Rolston had never coached in the NHL prior to his Feb. 20 promotion. ©2013, Dan Hickling, Olean Times Herald

BUFFALO – Hours after Ron Rolston replaced Lindy Ruff on an interim basis Feb. 20, the new Sabres coach walked into a Toronto hotel and addressed a room full of shocked players.

Most veterans knew nothing about Rolston, a college, junior-age and AHL coach for 23 years. The 46-year-old had never spent one day in the NHL.

“You’re always wondering what’s going to happen when he first comes in,” Sabres winger Steve Ott said by phone Tuesday after the Sabres removed the interim tag and named Rolston the 16th coach in franchise history.

“He said, ‘You know, I might not have all the accolades or the NHL stats of some other guys, but I’m here to teach you guys the process of getting better every single day. I’ll be fully prepared every single day,’” Ott said. “And he was. The preparation side of things from Ron was great. The excuse falls on the players if you’re not ready to go, and that’s a big thing I’ve taken from Ron is he had the ability of teaching everything you need to (do).”

But as the lockout-shortened campaign progressed, Regier noticed Rolston’s motivating and teaching talents. That the Sabres finished 12th in the Eastern Conference and missed the playoffs again didn’t matter.

Regier wanted Rolston, a noted talent developer, to take over the rebuilding club, one of the league’s youngest.

“It became more and more evident that he was a very good fit, not only for the present, but for the future,” Regier said inside the First Niagara Center in announcing Rolston’s hiring.

Rolston is 15-11-5 during his short tenure. He signed a multi-year contract when the Sabres promoted him from Rochester, Regier said.

Given the Sabres’ youthful roster and his pedigree, Ott said Rolston is “100 percent” the “perfect” hire.

“The reason I say this is because these young guys need to learn to play the game the right way,” Ott said. “When I mean the right way, it’s just limiting turnovers, execution, preparation, becoming a professional – and that’s what Ron brings. He brings all those elements on a teaching side, development side of things that makes it real understanding.”

Hiring Rolston now allows the Sabres to “hit the ground running” and begin what will almost certainly be a busy offseason.

“In life, I think the big thing is that struggling isn’t an option, I think it’s a requirement,” Rolston said. “From where we’re at patience is an extremely hard thing for our society in general, especially with the fans in Buffalo, what kind of team they want to have.

“But there will have to be a process to do that, so the patience is in the process of how we have to go about that.”

That process includes establishing a fresh atmosphere. After a hectic few months acclimating himself, Rolston will have a full training camp and a regular 82-game schedule next season to fully put his mark on the team.

“I thought we got better throughout the whole season from when he took over,” Ott said. “Honestly, I thought the process was a continuation. To have him kind of ready for next year I think it’s great for us so that we can continue to build off what we were starting to accomplish toward the end of this year.”

Ott added: “Guys all know where they stand with him.”

Naturally, Rolston wants to create a close-knit group and a buzz at the rink each day.

Regier, who lured Rolston from Team USA’s development program in July 2011, said he first spoke to Rolston about 10 years ago in Lake Placid.

When Rolston took over the AHL Americans, his first professional gig, the NHL seemed years away.

Some observers felt he would reach the big leagues someday, just not so soon.

“This doesn’t come overnight,” Rolston said. “It’s a process … where it’s been 23 years coaching, and it’s a profession, it’s a passion. It’s starting at the college level and learning …

“It was accelerated, yes. But if you keep putting yourself in those opportunities and doing the job and making the place that you were at better, then things seem to happen in a positive matter down the road.”

Rolston said he would’ve returned to the Amerks if the Sabres had hired someone else.